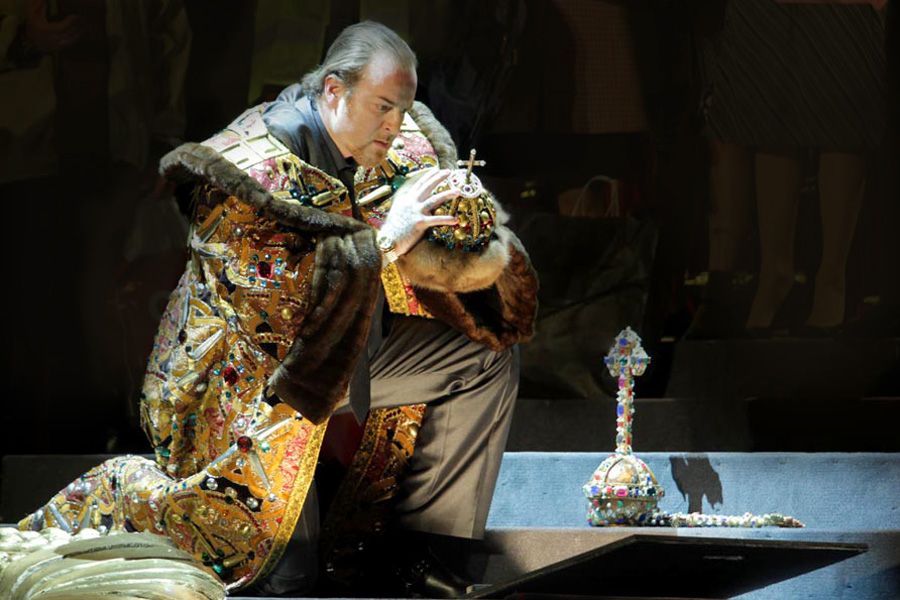 Prologue and Scene I
A courtyard of the Novodevichy Monastery outside Moscow. Guards and police officers are goading the people to pray that Boris Godunov will accept the throne. The Duma clerk Shchelkalov comes out and informs the people that Boris refuses to accept it. The police officer announces the Boyar’s order: “Be in the Kremlin tomorrow and await orders”.

Scene II
A square in the Moscow Kremlin. Boris’ coronation in the Cathedral of the Assumption. Boris appears amid bell-ringing to the people. He appears afraid of the burden of power.

Scene III
A cell in the Chudov Monastery. Monk Pimen is completing his chronicle of Russian history. The young novice, Grigory wakes from a bad dream; for the third time now he has seen himself ascend a steep staircase and look down from a great height over Moscow before falling.
Grigory listens to the story of Pimen’s earlier life asking particularly about the death of Tsarevich Dmitry in Uglich. Pimen recounts the murder of the boy, implicating Boris. “He would have been the same age as you and have ruled”, says Pimen. These words have a deep effect on Grigory, resulting in a brave and wild plan.

Scene IV
An inn on the Lithuanian border. Having run away from the monastery, Grigory, accompanied by the two wandering monks Missail and Varlaam, intends to cross the border. Grigory learns from the hostess how to slip into Lithuania, avoiding the border guards.
Police officers arrive at the inn looking for a fugitive who poses a danger to Muscovy. Only Grigory can read the warrant. He reads that the novice Grigory had run away from the Chudov monastery and the Tsar has ordered his capture. The warrant contains a description. To save himself Grigory reads out a description of Varlaam. Varlaam seizes the warrant and, struggling, slowly reads out the imperial decree. Grigory is recognised. He escapes.

Scene V
The Tsar’s apartments in the Moscow Kremlin. Fyodor, Boris’ son, is studying while his sister Xenia mourns the death of her fiancé. The Tsar enters. He tries to console his daughter and takes interest in his son’s studies. All is not well with him. Boris knows that the people hate him and that he will be unable to attain their affection by any means.
Boris’ reflections are interrupted by the arrival of Shuisky. It is with great schadenfreude that he informs Boris that a Pretender has appeared in Lithuania. The name of the Tsarevich Dmitry unsettles Boris.
Boris orders Shuisky to fortify the Lithuanian border. He asks the Prince to confirm the Tsarevich’s death. Shuisky tells of the murder in detail. Surprised and terrified, Boris dismisses Shuisky. Alone with his conscience, he imagines he sees the ghost of the murdered child.

Scene VI
Outside St Basil’s Cathedral, Moscow. In poverty and hunger, the people await the end of the service. Inside the cathedral, Grigory is being denounced. The word is being passed that the Pretender’s forces are approaching Moscow.
Children outside the cathedral steal a kopeck from a Simpleton. He weeps. The Tsar and his entourage leave the cathedral. The people demand bread. The Tsar asks why the Simpleton is crying. “Some boys stole my kopeck, kill them like you had the young Tsarevich killed”. Boris asks the Simpleton to pray for him. “I cannot pray for Tsar Herod”.

Scene VII
The Granovitaya Chamber in the Moscow Kremlin. A meeting of the Council of Boyars to debate what action to bring against the Pretender. The others are disturbed that Shuisky is not present. He arrives at last. His tale of Boris’ sick visions is not believed. But Boris appears with the cry of “Be gone, be gone child!”. He addresses the Boyars. Shuisky interrupts him, suggesting he listen to an old man who wishes to divulge a secret. Pimen enters. He tells the Tsar that in Uglich there has been a miracle: a blind man recovered his sight at the grave of Tsarevich Dmitry. Boris cannot take this shock. Sensing that death is near, he calls his son…
To the tolling of bells, the dying Boris indicates Fyodor with the words “There is your Tsar…”

Co-production with the Festspielhaus Baden-Baden

Running time 2 hours 30 minutes
There will be no interval