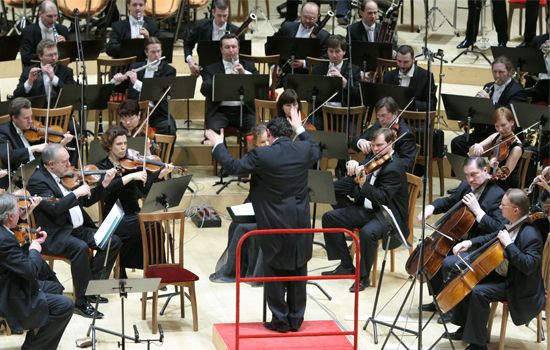 Featuring Olga Borodina
The programme includes:
Modest Musorgsky
Dawn on the River Moskva (overture from the opera Khovanshchina)
The vocal cycle Songs and Dances of Death

... You can hear some kind of love,
implacable, deadly! Death, coolly and passionately
in love with death, the enjoyment of death!
Modest Musorgsky

The summer of 1873 saw the death of the artist Viktor Hartmann, a close friend of Musorgsky (the composer would dedicate the piano cycle Pictures at an Exhibition to him). In less than a year Musorgsky was to suffer the death of a most beloved companion (Nadezhda Opochinina) and miseries with a production of Boris Godunov at the Mariinsky Theatre. When the opera was, at last, staged successfully, the composer was deeply hurt by the cool reception it received from his musician colleagues. Feelings of inconsolable loss, disappointment and nostalgia found expression in the song cycle Sunless to verse by Arseny Golenishchev-Kutuzov. Soon the composer tackled another song cycle to verse by the same poet – Songs and Dances of Death (1875–1877). Here one can see four faces of Death. Death cradling a sick child and taking him from his devastated mother (Cradle Song)... Death serenading a dying girl (Serenade)... Death enveloping a drunken peasant in a snowstorm (Trepak)... Death hailing victory over those who have fallen on the battlefield (The Field Marshal)...
Musorgsky hated death for taking away all that was beautiful and dear to him; in his correspondence with friends he called it an “executioner”, being “snub-nosed” and an “untalented fool” who “cuts down without discussing whether anyone needs its damned visits.” And yet the content of the new cycle is not connected with the composer’s own personal drama or the social tragedy of contemporary Russian society. Here, arguably Musorgsky’s most romantic work, there is a truth not fully revealed – one can sense some kind of enchantment and fascination with the majesty of death! And this unites him with the famous series of engravings The Dance of Death by Hans Holbein the Younger and with Liszt’s Danse macabre – a paraphrase on the theme Dies irae for piano and orchestra, which was, apropos, one of Musorgsky’s most favourite works.
Vladimir Stasov, who gave the composer and the poet the idea for Danse macabre russe, ensured that the initial idea of the cycle included several other parts as well as the songs we know. Musorgsky performed numerous extracts and even major sections from them for him on several occasions. The originals of these have not, however, survived to the present day.
The first orchestral version of the song cycle (Musorgsky composed the original for piano accompaniment) was written by Alexander Glazunov together with Nikolai Rimsky-Korsakov. In 1962 there emerged a new orchestral score of Songs and Dances of Death – by Dmitry Shostakovich.

In the four movements of this aural, finely woven
fabric one can hear and see miracles...
Boris Asafiev

“The idea of an orchestral piece based on scenes from Schéhérazade came to me in the middle of winter in 1887,” Rimsky-Korsakov wrote in his Chronicle of My Musical Life. In just two months in the summer of 1888 the composer had completed the score of the four-movement suite for full symphony orchestra.
“The programme that guided me when composing Schéhérazade,” Rimsky-Korsakov continues, “were individual scenes – not connected with one another – taken from One Thousand and One Nights, scattered throughout the four movements of the suite: The Sea and Sinbad’s Ship, The Tale of the Kalendar Prince, The Young Prince and the Young Princess and Festival at Baghdad. The Sea. The Ship Breaks against a Cliff Surmounted by a Bronze Horseman.
A great musical storyteller, Rimsky-Korsakov created a work that truly stands alone with its amazingly picturesque nature, the orchestral colours and its almost tangible aural inventiveness. It is not for nothing that the score of Schéhérazade has received incredibly lofty praise from such musical “illustrators” as Debussy and Ravel. At the same time, in Schéhérazade one can make out a deep and philosophical subtext – a hymn to the majesty of nature and the all-conquering power of human love and the glory of the creative spirit... The visible expressiveness and plastique imagery of the music stir the listener’s imagination even without the programme titles.
Iosif Raiskin