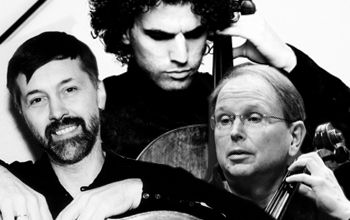 The three cellists are each performing their favourite concerto before together surfing the waves on the ocean of Raskatov’s music: a world premiere! And all of this together with Valery Gergiev and musicians of the Mariinsky Theatre Orchestra...
Close of the V Festival of Contemporary Music New Horizons

What in particular attracts you to the works you will be performing?
Alexander Ivashkin: Nikolai Korndorf’s Concerto capriccioso is a very special piece for me, written by a great composer, an old and dear friend and colleague of mine who later wrote, for me, his monumental Passacaglia (1997) for solo cello, a sort of “digest” of Dante’s La divina commedia. Written in 1986, this concerto waited nearly twenty years for its premiere, when I first performed it in Canada in 2004 where Korndorf lived out his final years. The Russian premiere took place at the Great Hall of the Moscow Conservatoire in 2005.
Ivan Monighetti: When I play this work it seems to be the most magical piece of music I ever performed.
Gavriel Lipkind: It is a great piece. Instead of a standard sonata form, the material is developed in a radical evolutionary way. Starting from a single note, nothing initially exists except a simple human pulse and the tonal world of the open D string. The energy slowly gathers. As with Shostakovich, there is a single stream of consciousness. The first part of the concerto immerses us in the most sacred depths of Individuality. The orchestra, representing a crowd, the masses and society, interrupts the contemplations of the cello with a loud and shrill trumpet. From that moment on a powerful dialogue begins to develop using all of the solo instruments. The music is abstract yet at the same time very illustrative – the score is perfectly organised chaos. Despite its virtuoso qualities, this piece tells us about the simple truths of life in the 20th century. Fantastic rituals, political intrigues, village scenes, madness and resurrection... in Lutosławski’s concerto all of this blends into a unified polyrhythmic micro-tonal narrative.

What makes this concerto so specific?
Alexander Ivashkin: This highly innovative work is inspired by the oriental improvisations used in the Sufi and Maqam cultures. It makes use of motifs of pagan and Christian rites, minimalist technique, elements of rock music and the aesthetics of avant-garde poetry by Velimir Khlebnikov, Daniil Kharms and Alexander Vvedensky.
Ivan Monighetti: It bears a very important message.
Gavriel Lipkind: See the above.

Are you looking forward to the Raskatov piece for three celli, three boys’ voices and orchestra?
Alexander Ivashkin: Yes, I am very much looking forward to hearing this work by Raskatov, especially as he is an old and good friend of mine. He also wrote Kyrie eleison, a piece I premiered and have performed on numerous occasions throughout the world.
Ivan Monighetti: Of course, I would love to hear angels singing!
Gavriel Lipkind: Three celli and three boys’ voices: how could you not love it? Of course!