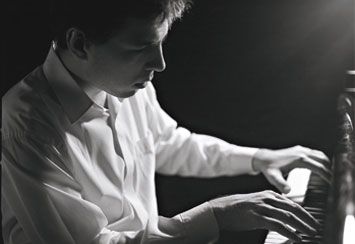 The programme includes:
Alexander Raskatov
Angels Read Your Book for soprano and piano to poetry by Gennady Aigi

Andrei Korobeinikov
Two poems (A Verse, I Love the Silence)

An interview with Andrei Korobeinikov

Why Scriabin +?
Scriabin is perhaps the most cosmogenic composer in the entire history of music. He may stand alongside Beethoven, but the way Scriabin conveys the music of the universe (at times I honestly believe it seems derived from outer space) is more aimed at expressing the mystical essence of our existence. It is enigmatic in itself and gives the listener a very precise and clear sensation of some incredible and pure force that lies beyond the power of our understanding. At the same time, if you fully immerse yourself in this music (and that is the only way to listen to it properly) you will sense the knowledge and energy with which Scriabin instils his music; the fire is incredibly truthful, veracious, definitely not just “fantasy.” Scriabin himself thought and felt he was a Messiah, and I’m sure he really was a person of that rare kind.

Scriabin had no pupils or direct followers of his composition style and his musical world. But the ideas and energies touched on and expressed by him remain topical and alive within modern music...
I will be performing pieces where the general style may be far from Scriabin’s (because it’s silly and impossible to imitate his music), but there are elements, either within the music itself or within the aesthetic or philosophical concept, that build a link between Scriabin’s world and that of present-day composers who reflect on the “world of nowadays.” I find this link not only interesting but also necessary to a certain degree.

If you hadn’t been a musician, what would you have done?
Maybe I would have been an astronaut or astrophysicist – the universe fascinates me. I also studied law, but in Russia law is much more ephemeral than the music of the universe... It resembles a vacuum.

What can audiences expect from this concert?
I know I have big competition that day in St Petersburg as maestro Gergiev and Olga Borodina have a performance!
I think I have one big distinction – no-one can really imagine what it will really be like. So you will just have to come and see for yourselves.

Which, if any, is your favourite football team?
Moscow’s Spartak FC: “Who are we?” “Meat!” – that’s all part of who I am!