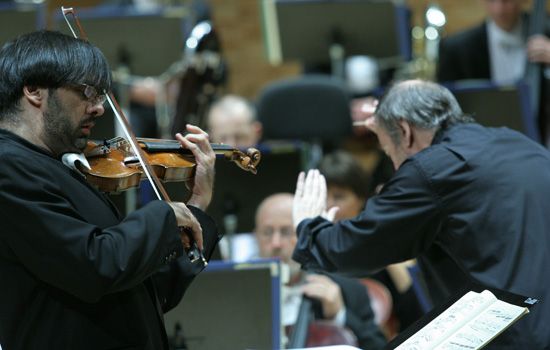 L’Ascension, four symphonic meditations (1932–1933), was one of Olivier Messiaen’s first works for orchestra. The makeup of the instruments is still romantic, without piano and synthesisers, though the timbres are already clearly in Messiaen’s style – like the stained glass windows of a cathedral on a sunny day. The sound of the orchestra in L’Ascension comes as close as possible to that of the organ (in 1934 Messiaen revised the work for solo organ, adding a new third part). At that time, the composer was as yet uninterested in Eastern philosophy, and for him the word “meditation” was not connected with Buddhist practices related to reflection and contemplation. Each section of the work, which is dedicated to the Ascension of Christ, has a full title and epigraph. The first section, which uses only wind instruments that imitate the sound of the organ, is named Majesté du Christ demandant sa gloire à son Père and carries the epigraph Father, the hour is come; glorify Thy Son, that Thy Son also may glorify Thee (Christ’s prayer for his disciples). The second section is Alléluias sereins d'une âme qui désire le ciel and bears the epigraph God… we pray to Thee, allow us to abide with Him in Heaven (Ascension mass). The third section, written in the genre of a scherzo, is entitled Alléluia sur la trompette, alléluia sur la cymbale and has the epigraph All ye nations, clap your hands; shout unto God with a joyful voice (Psalm 46). The final part, performed by a “chorus” of strings, is Prière du Christ montant vers son père with the epigraph from a prayer for the remaining disciples: Father, I have revealed Thy name to men… And now I am no more in the world, but these are in the world, and I come to thee.

Sergei Prokofiev wrote his Second Violin Concerto for the French violinist Robert Soetens, who lived to the age of one hundred years, during eighty-eight of which he performed as a concert musician. In his Autobiography, Prokofiev recalled that “The concerto was composed in very different countries, thus reflecting my own nomadic life as a concert musician: the main part of the first movement was written in Paris, the first theme of the second movement in Voronezh and the instrumentation completed in Baku, the first performance taking place in December 1935 in Madrid.” Together, the composer and the violinist visited a great many countries, among them Portugal, Morocco, Algeria and Tunisia.
Prokofiev’s nomadic life had no effect on the integrity of the musical composition. The concerto was composed in the neoclassical style, then new for Prokofiev, with clearly expressed intentions for simplicity and clarity. The orchestration is transparent – ascetic, even: the first movement opens with the melody of the violin to no accompaniment whatsoever. The romantic second movement is reminiscent of Prokofiev’s magical ballet adagios. The virtuoso finale stands apart for its energy and humour: in the coda, the violin solo is accompanied by... double basses and a bass drum. At the end of this movement, Prokofiev introduced the castanets – in all probability in contemplation of the impending premiere in Madrid.
Anna Bulycheva

Three years after moving abroad (on a performing tour that lasted no more and no less than fifteen years), the thirty-year-old Sergei Prokofiev brought to life a longstanding vision – to write a “very passage-like” piano concerto, his third work in this genre. Having received a “poisonous” review, as the composer himself said, from the American press, the concerto nevertheless soon became one of Prokofiev the composer’s most famous pieces and the jewel in the crown of Prokofiev the pianist’s numerous concert performances. Possibly the reason behind the immense popularity of the Third Piano Concerto (1917–1921), in particular lies in the fact that the work was composed at the height of his creative career and combined “the still fervent ardour of his youthful temperament … with his emergent maturity and wisdom” (Boris Asafiev). The impetuous flow of contrasting themes that the audience hears – energetic and impassioned, sparkling with energy and mischief, lush and tangibly clear – forms a classically strict and proportionate composition of three sections that are ideally structured in terms of form. A supporter of “the new simplicity” in music, Prokofiev succeeded in expounding all of his musical discoveries with such incredible elegance and laconic brevity: there are no prolixities, general spaces or predictable turns in the concerto, and each musical idea is as if marked by the symbol nota bene and makes us listen to the twists and turns of Prokofiev’s inexhaustible imagination with unfailing interest.
Marina Iovleva