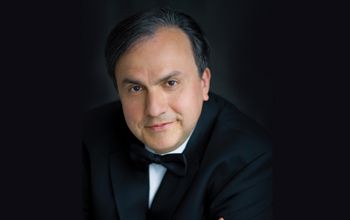 The programme includes:
Johannes Brahms
Piano Concerto No 2 in B Flat Major, Op. 83

In the years when Liszt’s followers were composing one-movement concerti and rejecting everything that seemed to be a survivor of or meaningless tribute to tradition, Brahms remained true to the classical canons. In all of his concerti he retained two expositions – orchestral and solo – in the first section without condensing the form, quite the reverse expanding it. Brahms’ Second Piano Concerto (1881) takes on Wagnerian proportions, its character could be described using Bruckner’s favourite term feierlich (triumphantly, festively), and later the main theme was to resound anew in Mahler’s Second Symphony. The first section opens with a theme in the character of an anthem: Brahms clearly did not believe that human suffering was the only object worthy of being portrayed in art. The scherzo is unique: passionate, restless and with a dance section in the middle part. The slow third section opens and closes with a cello solo. This melody later became the song Immer leiser wird mein Schlummer. The finale begins with a joke in the style of Beethoven – not in the main key. Brahms accompanied it with the remark “graciously” which he had previously used only in his scherzos. The official premiere of the concerto took place in Budapest, the unofficial premiere somewhat earlier in Meiningen when Hans von Bülow had given Brahms the opportunity to test his latest works live. Brahms’ piano technique had by no means become simpler, but it had acquired a sheen it was lacking. Unlike the First, the much more complex Second Concerto proved an instant “hit” and the composer performed it dozens of times on tour, swapping places with von Bülow at the piano and the conductor’s stand.

Barely familiar with his piano sonatas, Robert Schumann saw a symphony composer in Brahms. Composing for orchestra was Schumann’s legacy to his younger colleague. Clara Schumann, who had at one time inspired her brilliant husband to turn to the symphony genre, now inspired Brahms to work in that genre too (interestingly, both composers wrote four symphonies apiece). In Brahms’ First Symphony (1862–1876) there is much that is reminiscent of Beethoven. The music moves “from darkness to light,” here you can sense the desire and readiness “to grab destiny by the throat” and the entire first movement flows in a battle between high and low voices. Following the example of Haydn’s late sonatas and Beethoven’s Third Piano Concerto, the second movement was composed in a tonality very remote from the main one as if it were flowing in some other reality. The third movement is a gracious and feminine scherzo. The finale is one of Brahms’ most intense achievements, one of which he was justifiably proud. The broad theme in major key from the introduction may have suggested to Mahler the idea that a “symphony should be like the world.” The main theme with its many voices resounds like a chorale, in parts resembling Beethoven’s Ode to Joy: after the battle in the first movement, in the finale a long-awaited union occurs. The symphony was published by Simrock, and published so well that Brahms wrote to his publisher of their joint work “It is lying on the piano and is delighting and surprising everyone; I have to stop young composers seeing it, otherwise you would be sent too many symphonies.”
Anna Bulycheva