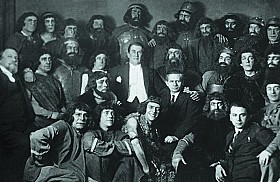 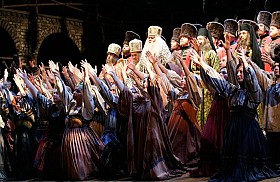 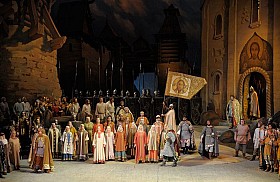 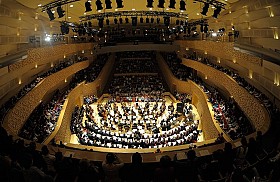 HISTORY OF THE CHORUS

The Mariinsky Chorus is well known both in Russia and abroad. It is interesting not only because of its high degree of professional musicianship, but also for its history, which is rich in events and is closely linked with the development of Russian music.

In the mid 19th century, a period of intense activity by the outstanding opera conductor Eduard Nápravník, the Mariinsky Theatre staged the first productions of acclaimed operas by Borodin, Musorgsky, Rimsky-Korsakov and Tchaikovsky. The large-scale choral scenes in these operas were performed by the Mariinsky Chorus, an integral and dazzling component part of the Opera Company. The successful development of choral performance traditions at the theatre was due to the lofty professional endeavours of such outstanding chorus masters as Karl Kutschera, Ivan Pomazansky, Yevstafy Azeyev and Grigory Kazachenko. The foundations they laid were lovingly maintained by their successors, among them such chorus masters as Vladimir Stepanov, Avenir Mikhailov and Alexander Murin. Andrei Petrenko was the Mariinsky Theatre Chorus Master since 2000 to 2020.

The theatre’s chorus possesses a beautiful and powerful sound as well as an unusually rich sound palette, and during performances the members of the chorus also demonstrate their vivid acting skills. The chorus regularly appears at international festivals and performs in world premieres. Today it is one of the world’s leading choral ensembles. Its repertoire consists of over sixty Russian and European classical operas as well as a huge number of cantata and oratorio works, including music by Pyotr Tchaikovsky, Sergei Rachmaninoff, Sergei Taneyev, Igor Stravinsky, Sergei Prokofiev, Dmitry Shostakovich, Georgy Sviridov, Valery Gavrilin and Sofia Gubaidulina among other composers.

The Mariinsky Chorus regularly performs in programmes of the Moscow Easter Festival and the international festival that commemorates Russia Day. It took part in the first performances of Sofia Gubaidulina’s St John’s Passion and St John Easter, Vladimir Martynov’s Vita Nuova and Alexander Smelkov’s The Brothers Karamazov as well as the Russian premiere of Rodion Shchedrin’s opera The Enchanted Wanderer (2007).

For its recording of Sofia Gubaidulina’s St John’s Passion in 2003 the Mariinsky Chorus under Valery Gergiev received a Grammy nomination in the category “Best Choral Performance”.

The Mariinsky Chorus has taken part in a number of recordings for the Mariinsky label under the baton of Valery Gergiev, among them Shostakovich’s The Nose (2009), Tchaikovsky’s Moscow cantata (2009), Wagner’s Parsifal (2010), Shchedrin’s The Enchanted Wanderer (2010), Shostakovich’s Second and Eleventh Symphonies (2010), Donizetti’s Lucia di Lammermoor (2011) and Stravinsky’s Les Noces and Oedipus Rex (2010). For this last recording the chorus won one of its most prestigious prizes – the coveted ICMA 2011 award “For the Best Work by a Chorus”, beating sixteen other European choruses in this category.