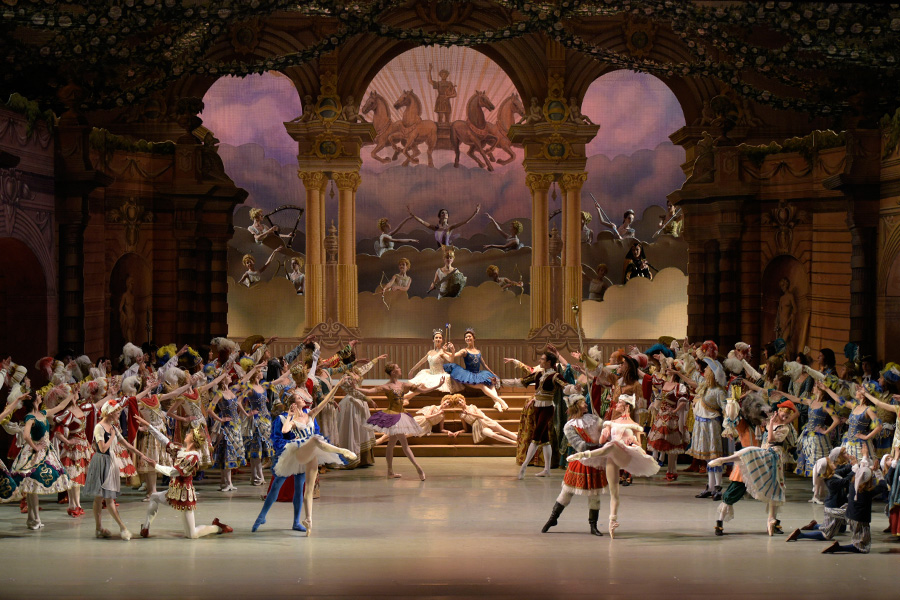 Music by Pyotr Tchaikovsky
Choreography by Marius Petipa (1890)
Libretto by Ivan Vsevolozhsky and Marius Petipa, after tales by Charles Perrault

Prologue
King Florestan and his court are celebrating the christening of his daughter, Princess Aurora. Fairies bring gifts for the young child for whom they will be godparents, among whom the Lilac Fairy is the principle godmother. The celebrations are suddenly interrupted when Catalabutte, the Master of Ceremonies responsible for compiling the guest list, realises that he has forgotten to invite the fairy Carabosse. Carabosse appears with her evil entourage and swears that she will have her revenge. She predicts that one day Aurora will prick her finger and die. The Lilac Fairy, however, intervenes. She promises that Aurora shall not die, but will merely fall into a deep slumber, to be awakened by the kiss of a Prince enchanted by her sleeping beauty…

Act I
A Terrace in the Castle Park
Aurora has just turned twenty and Florestan is delighted that Carabosse´s prophecy has not come to fruition. Some women are found knitting in front of the castle and are immediately condemned to prison, but the Queen intervenes on their behalf and the King pardons them. At the birthday celebrations, four Princes come to seek Aurora´s hand in marriage. Aurora enters and, having charmed them all, dances with each of them. While Aurora is reflecting on the Princes, she notices an old woman marking time to the music with a spindle. She takes the spindle from her and dances with it herself to impress her suitors. But she pricks her hand and, a few moments later, falls senseless. The old woman then reveals herself as Carabosse and, evading capture by the Princes, disappears in a cloud of smoke and flame. The Lilac Fairy appears and, as the Princess is carried indoors, says she has come to keep her word. At a wave of her wand, a deep sleep falls over the whole court and a dense forest grows up around the castle.

Act II
Scene 1: The Forest
Prince Désiré and his courtiers are out hunting. He is tired and sends them off to hunt without him. Once he is left alone, the Lilac Fairy appears in a mother-of-pearl boat and shows him a vision of Aurora whom she says can be his wife. The Prince is enraptured by Aurora´s beauty, but each time he tries to touch her, she evades him. The Prince implores the Lilac Fairy to show him where this vision may be found in reality. Motioning him into the boat, the Lilac Fairy promises to take him there.

Scene 2: Sleeping Beauty´s Castle
Aurora is sleeping on a wide bed under a canopy, surrounded by the slumbering court. Prince Désiré and the Lilac Fairy enter and the Prince rushes to Aurora´s side. He calls to her in vain to wake her and then, in desperation, he kisses her. The spell is broken and Aurora awakes. The rest of the court stirs also, and the castle comes to life. Enchanted by Aurora´s beauty and charm, Désiré asks the King for her hand in marriage.

Act III
Scene 1: The Esplanade of King Florestan´s Castle
The wedding of Prince Désiré and Princess Aurora.
The court assembles for the wedding celebrations. At a sign from the King, the celebrations begin, first with national dances, then with a procession of fairy-tale characters. Aurora and Désiré are congratulated by the Diamond, Sapphire, Gold and Silver Fairies. Finally it is the turn of Désiré and Aurora themselves to dance.

Ivan Vsevolozhsky, the Director of the Imperial Theatres, was the initiator of The Sleeping Beauty production and the landmark encounter between Pyotr Tchaikovsky and Marius Petipa. He wrote the libretto, created the costumes and became the co-author of the miracle born by the genius of two great masters in 1890. In the production, it was as if Vsevolozhsky, a brilliant connoisseur and enthusiast of Louis XIV, opened a window into his favourite period creating a feeling of an exuberant, almost masquerade-like extravaganza: in one scene, like at balls in Versailles, could come together ultramarine, lilac, scarlet and emerald costumes.
The pathos of respect for the French Golden Age (not just Aurora but the entire world woke up under the Sun King) was fundamental to the idea behind The Sleeping Beauty and determined the atmosphere of the ballet extravaganza. But, unfortunately, in the 20th century, the production got a makeover, was adapted to the tastes of different times.
After long decades of oblivion, the image of the production of the times of Petipa returned to the stage of the Mariinsky Theatre in 1999. The 1890 stage design was revived based on the sketches by Vsevolozhsky and the premiere decorative artists, while the choreographer Sergei Vikharev restored the structure of Marius Petipa’s creation drawing on the recordings of the ballet made in the early 20th century – with all the splendour of the spectacle, the ceremonious metering of dance and pantomime, and the atmosphere of celebration. And today the 21st century audience has the opportunity to see in action on stage the luxurious gesamtkunstwerk which in its day inspired Alexandre Benoi to venture Russian Seasons. Olga Makarova