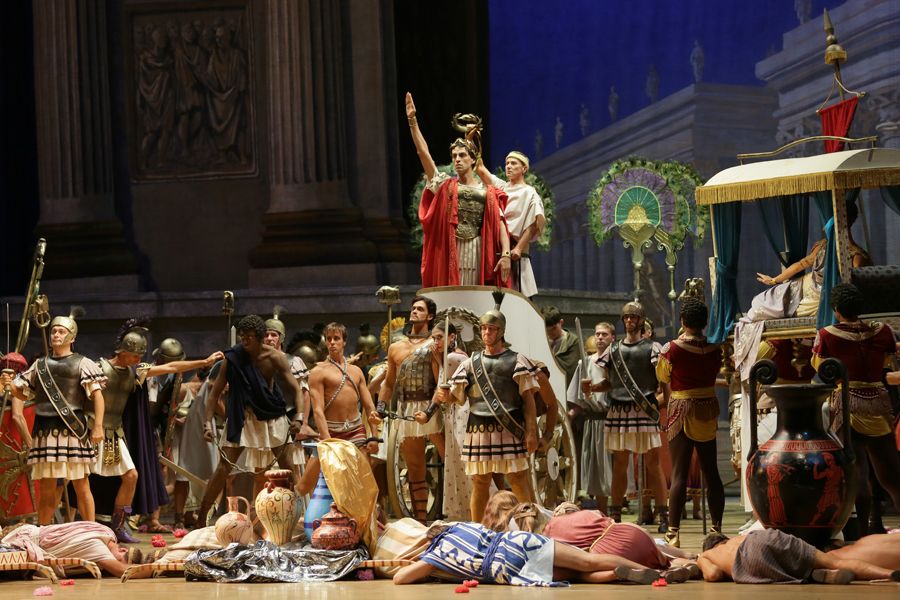 ballet by Leonid Yakobson set to music by Aram Khachaturian

Act I
The triumph of Rome
The Roman general Crassus is returning victorious from a battle in Thracia. The rejoicing crowd welcomes the legionnaires. Captive slaves are placed in Crassus’ golden chariot. Spartacus, his wife Phrygia and Harmodius are among them.
The Roman aristocrats, patricians and senators bow to the general. Crassus meets Aegina the courtesan.

The slave market
Lentulus Batiatus, the owner of a gladiatorial school, comes to the market. Spartacus and Harmodius, chained together, draw his attention. Lentulus Batiatus buys them both. Sad is the hour when Phrygia and Spartacus are separated.
Aegina is brought in on a richly decorated sedan. The courtesan examines the slaves and her gaze falls on Harmodius, but he has already been sold. Aegina buys Phrygia.

The circus
Excited at what is to come, the crowd awaits the start of the show. Crassus and Aegina’s box is in the middle of the amphitheatre. The Gaul, Numidian and African fight in the first battle of the gladiators. The Gaul dies and the injured Numidian begs to be allowed to live, but the crowd demands his life. The corpses are carried off. Retiarius and Mirmillon – the “Fisherman” and the “Fish” begin to fight. Dying, Retiarius curses Rome. Then two detachments of gladiators enter: the Samnites and the Thracians. The frenzied battle comes to the boil. The detachment led by Spartacus is victorious. The crowd clap in delight.

Act II
Saturnalia
Spartacus appears, hiding from the night patrol. Phrygia tells of her live as a slave. Spartacus agrees on a secret meeting with his gladiator friends. Aegina observes this. Wanting to expose their secret, she beckons Harmodius to her.
The people are praising the god Saturn. Crassus is brought out of the palace. One of the slaves carrying the sedan stumbles. a libertine kills him at Crassus’ order. Spartacus calls on his comrades-in-arms to revolt. They swear their loyalty to the battle for freedom.

The Gladiators revolt
The gladiators languish in a gloomy prison. They are fettered in humiliating chains. Better death n the battlefield that in the circus for a crowd that want blood.
The chains are broken. But the guardhouse is already giving the alarm. The gladiators start fighting the guards.
Spartacus opens the gates and leads the rebels out.

ACT III
Spartacus’ camp
Spartacus’ warriors experience victory after victory. Now the Romans are lowering their banners to the leader of the rebel slaves. Aegina is in the rearguard of Spartacus’ forces, among the captive centurions and hetaerae. She looks for Harmodius brings him to the generals’ tent where the hetaerae are dancing.
Spartacus appears unexpectedly. To the dismay of the generals he orders the camp be cleared of the hetaerae immediately. But Aegina remains. Spartacus orders her too to go. Harmodius protests. a quarrel begins. The conflict grows. a group of captive generals and their detachments leave the camp. Attracted by Aegina, Harmodius leaves with them. Spartacus’ faithful comrades-in-arms remain with him.

Crassus’ feast
A feast is underway at Crassus’ villa. Aegina tells Crassus that she has brought Harmodius, who has quarrelled with Spartacus, and she tells of the dissent among the rebel slaves. Crassus gives the order to destroy the camp of the in¬surgents who have left Spartacus. Phrygia sends a slave to Spartacus to warn him, but all is in vain.
At his feast, Crassus orders Harmodius be brought in. The purple curtains are flung open and Harmodius sees the gladiators who betrayed Spartacus, their bodies crucified. Harmodius realises Aegina’s treachery and tries to kill her, but the legionnaires stab the youth.
Crassus and Aegina vanish without trace. Spartacus’ warriors arrive at the villa.

Spartacus’ death
Phrygia is tormented by a premonition of disaster. Before the decisive battle she bids farewell to Spartacus. Surrounded by Crassus’ legions, Spartacus and his warriors perish in the cruel battle, true to their oath to freedom to the end. The retreat is sounded. The Roman warriors depart. At night Phrygia seeks out Spartacus body and mourns the fallen husband.

Leonid Yakobson’s Spartacus is arguably the most stunning and immense ballet production in the history of the Mariinsky Theatre in the 20th century. Loud, too, were the scandals even as the production was being rehearsed, when Yakobson cut and re-stitched the complete score by Aram Khachaturian, who objected to any amendments whatsoever. Differences in opinion between a choreographer and a composer come as no surprise in the theatre world, but for things to go as far as beatings (as they say the case was with Spartacus) and years-long quarrels is something of a rarity.
The production’s fame was tremendous. As work progressed, the Artistic Director of the Kirov Ballet Fyodor Lopukhov, who had invited Yakobson to stage Spartacus, gathered enthusiastic responses from dancers who had rehearsed the work in order to protect the ballet from the commissions which had to approve it, and when the time came for its fate to be decided he was armed with every written praise he could need. A rumour about the gripping plot spread like wild fire and Spartacus became one of the theatre’s most frequently attended productions – it was far from easy to get a ticket to see it. What was it that made balletomanes stand in queues at ticket offices on a shift system in order to ensure they had a seat?
In a classical dance theatre, Yakobson was the first to stage a ballet without pointes and with legs that were not turned out. This alone was enough to shock audiences: at the Kirov Theatre in the 1950s, the use of free plastique for an entire ballet was something beyond insanity (of Michel Fokine’s ballets, at the time only the classical Chopiniana was performed). Audiences were also intrigued by the grandiose spectacle. The production – with the scale of its historic plot, conceived as an Ancient fresco, with its massive crowd scenes, the huge number of characters, the corps de ballet and the extras – bore the secondary title of Scenes of Roman Life. The monumental four-act work brought to life the era, the life, the bloody battles of gladiators and the sensual bliss of patrician feasts. The multifaceted image of Rome was imprinted with an accent on the uprising of the slaves under the leadership of Spartacus and his routing by the warriors of Crassus. Imitating Ancient bas-reliefs, the choreographer embodied key episodes in the development of the plot in “living scenes”, static positions where the characters freeze during symphonic entre’actes between scenes. Inspired by the hautreliefs of the Pergamon Altar (when Spartacus was created this was still in the Hermitage) and referring to vase paintings, Ancient Roman images and sculpture, in dance Yakobson strived to recreate the spirit of the Ancient world. He was interested in the search for an individual dance language, unique to this ballet alone. The unexpected choreographic imagery, brought to life on-stage with the expressiveness of the poses and the “picturesque” precision of the gestures of the dazzling cast (Askold Makarov as Spartacus, Inna Zubkovskaya and Ninel Petrova as Phrygia and Alla Shelest as Aegina), conquered audiences. The adherents of classical dance voiced complaints that the ballet was not staged en pointe, that the plastique reproduction of images on Etruscan vases created the impression that the ballerinas were dancing “half-cocked”... Yakobson insistently demonstrated his right to his chosen method. He was convinced that the Ancient world, staged en pointe and depicted in “turned-out” classical dance, would be artificial. The choreographer held very dear his discoveries in plastique and the productions that did not have an easy stage life – he wrote a great deal about all this, parrying critics, emotionally and justifiably stating his right to the choices he had made.
Spartacus was in the repertoire for decades. First staged in 1956, it was initially revived in 1976 and again in 1985 and 2010. To this day it remains a testament to Leonid Yakobson – an inventive director and a subtle choreographic stylist who was able to stun the audience’s imagination with his monumental vision.
Olga Makarova