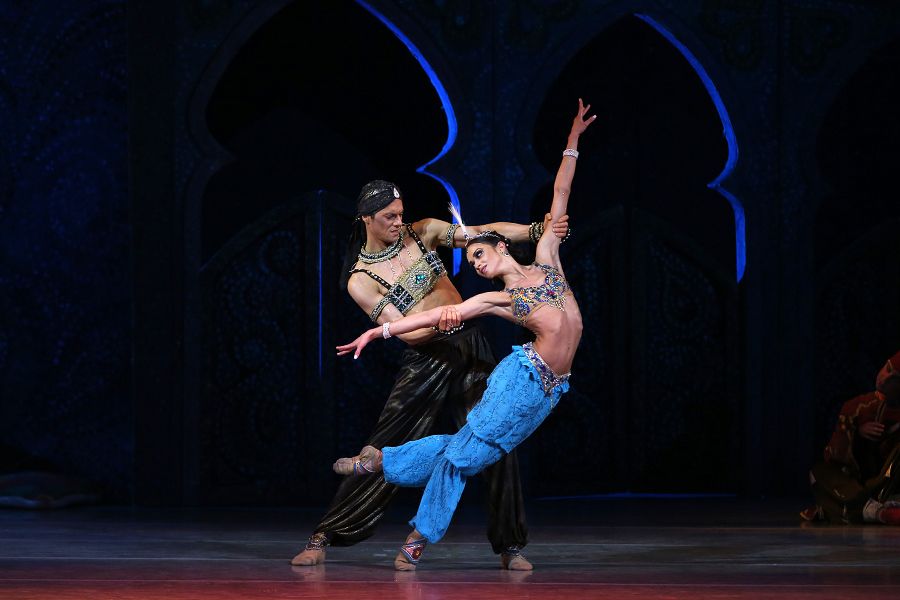 ballet by Michel Fokine set to music by Nikolai Rimsky-Korsakov

In 1910, Shéhérazade was a great success in Paris. The fashionistas of the time, having just shouted "bravo" at Les saisons russes premiere, hurried to put on serouals and turbans à la Eastern style which were created for the production by artist Léon Bakst. Fabric manufacturers launched the production of linens with ornaments in blue and orange colours, while jewelers sold gaudy trinkets, which were reminiscent of the shiny things worn by the artists on stage, with unprecedented success. Sergei Diaghilev was hoping to make a splash with a Paris performance of the ballet written after One Thousand and One Nights with the fabulous music by Rimsky-Korsakov and oriental exotics. Fokine sought to show all actions and feelings through poses and movements in his choreography. Ida Rubinstein drove the public crazy with her regal beauty, Vaslav Nijinsky – with animal-like flexibility of his half-naked body while soaring over the stage. Such passionate orgies as in Shéhérazade had never been seen by the Parisian ballet-goers before. And while modern theatre-goers would unlikely be stunned by the scenes of passionate embraces and bloody massacre at the harem, juicy musical, artistic and choreographic elements of Shéhérazade can still fire the imagination of a sensitive spectator.
Olga Makarova