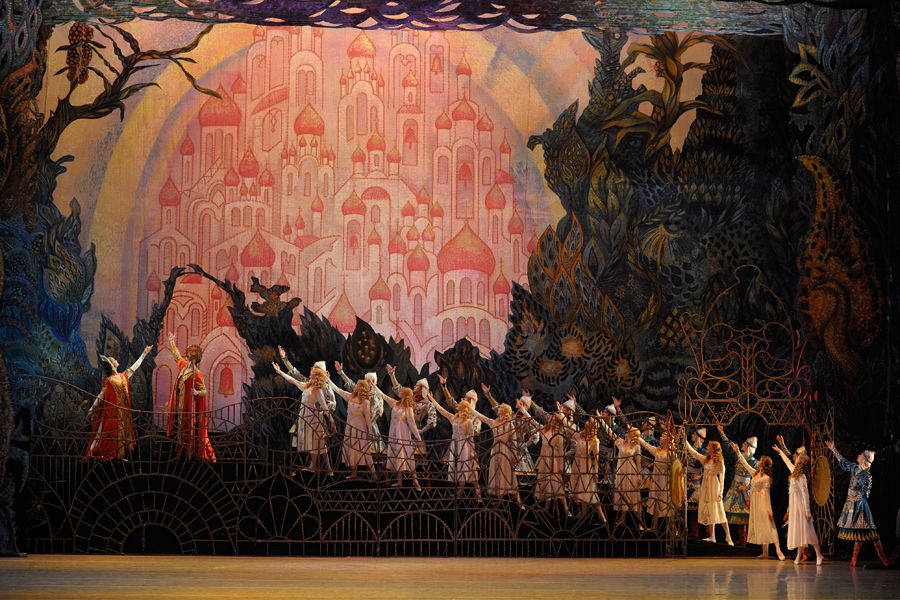 ballet by Michel Fokine set to music by Igor Stravinsky

Amidst the crags, on a mountain-top lies the castle of the wicked ruler Kashchei the Immortal. So that no-one gets near Kashchei or abducts his captive fair maidens, and so that no-one steals the golden fruits from the enchanted garden, the castle is surrounded by a fretted golden railing and the garden by a high stone wall.
The Firebird flies around the garden. Chasing the bird, Ivan Tsarevich slips into the garden over the high stone defences.
In the depths of the garden Ivan sees a veritable barrier of warriors who have been turned to stone. These are young men who have entered this perfidious kingdom in order to free and save their brides whom the evil Kashchei has abducted. All have died and now stand as immovable stones, covered in moss. And yet Ivan Tsarevich forgets these terrors as he has been dazzled by the Firebird. Initially he wishes to shoot her, but then decides to catch her alive. When the Firebird flies to the tree with golden apples and begins to peck at them, the tsarevich catches her. The bird trembles and beats her wings in his arms, begging to be set free. The tsarevich holds tight and does not let her go. But the bird asks so plaintively and groans so much that the kindly Ivan feels sorry for her. He sets the bird free, and in return she gives him one of her fiery feathers. "You will have need of this," the Firebird says before flying away. The tsarevich hides the feather in his bosom and wants to leave; he is creeping over the barrier when the castle doors open and twelve beautiful tsarevnas appear, followed by the most delightful of all – the Tsarevna of Great Beauty. Unbeknown to the wicked Kashchei, in the moonlight they run into the garden to frolic and play with the apples; the maidens do not see the tsarevich as they throw the apples to each other and laugh with glee. The Tsarevna of Great Beauty's apple lands in the shrubbery. She runs after it, but the tsarevich appears from the bushes and swears he will give her back the apple. The maidens are afraid and run away. But the tsarevich is very handsome, as well as courteous and modest. He has made a good impression on the maidens – particularly the Tsarevna of Great Beauty, and they allow him to join their games and round-dancing. They do not notice the dawn approaching.
The sun emerges. Alarmed, the maidens flee into the castle. The tsarevich follows them. But the Tsarevna of Great Beauty stops him, warning that death awaits him if he passes through the golden gates; she closes them and runs away. But the tsarevich has so fallen in love with the Tsarevna of Great Beauty that he resolves to slip in after her; he fears nothing. As soon as he breaks open the gates with his sabre, magical bells ring out, the entire kingdom falls asleep, and coming down the mountain from the castle are all kinds of monsters, Kashchei's servants. They seize the tsarevich. Ivan is strong, and tries to shake off these repulsive beings, but the incalculable power of the evil kingdom clings to him and overpowers him. Kashchei himself appears – old and fearsome. He summons Ivan to interrogate him. The tsarevich subdues himself and doffs his cap, but as soon as he sees the wizard's ugly face he cannot stop himself – he spits. The whole evil kingdom cries out and snarls. They drag the tsarevich to the wall. The tsarevna runs in and begs the tsar to pardon Ivan, but Kashchei is already beginning to turn him to stone. Just as Ivan is dying he remembers the fiery feather. He grabs the feather and waves it, and the Firebird comes to his aid. She dazzles everyone, spins them all around and throws them into a dance. The monsters dance; they cannot resist. Tsar Kashchei himself dances. The Firebird exhausts them all till they drop to the ground and then flutters over them with a lullaby as they lie there. The monstrous creatures roll over on their sides and together with their tsar they fall asleep. The Firebird leads the tsarevich to a hollow in the tree. In the hollow is a casket, in the casket there is an egg and within the egg lies Kashchei's death. The tsarevich takes the egg and squeezes it – Kashchei is contorted with pain; as Ivan tosses the egg from one hand to the other, Kashchei flies in all directions; the egg smashes on the earth and Kashchei crumbles.
The perfidious kingdom vanishes. In its place a Christian city rises and the castle is transformed into a church. The petrified warriors come to life. Each of them finds his bride – the tsarevna for whom they came to the loathsome Kashchei and for whom he accepted a cruel death. Ivan Tsarevich also finds his beloved, the Tsarevna of Great Beauty. He declares her his wife – Tsaritsa of the liberated kingdom.
Michel Fokine

Igor Stravinsky began his career with The Firebird. It was his first commissioned work, his theatrical debut, followed by a huge success. After the ballet was premiered in Paris, this previously unknown aspiring composer was now ranked among the main newsmakers of the new European art. Stravinsky was invited to write a new score for the Ballets Russes by Diaghilev, since Anatoly Lyadov, composer known for his ability to evoke the world of Russian fairy tales, had failed this order on time. Diaghilev who had a knack for discovering new talents had been impressed by young Stravinsky's Scherzo Fantastique for symphony orchestra, which was “burning and sparkling” as choreographer Michel Fokine put it. It was Fokine who came up with a “glowing image” of the Firebird. By the time Stravinsky became involved with the score, the libretto had already been completed. Fokine had a clear vision of the ballet and guided the composer. Colourful musical themes of the Firebird, the round dance of the Princesses with its Russian femininity, the “Infernal Dance of All Kastchei's Subjects” that turns into a riot of rhythm, it all grew out of discussions between the composer, choreographer and designers, Alexander Golovin and Léon Bakst. In 1910, they created an export Russian fairy tale and it conquered Paris. Yet in Russia, Stravinsky’s The Firebird was performed only in 1921 Fedor Lopukhov's avant-garde production. Fokine's version of The Firebird, for which Stravinsky created his score, became a part of the Mariinsky Theatre’s repertoire only in the late 20th century.
Olga Makarova