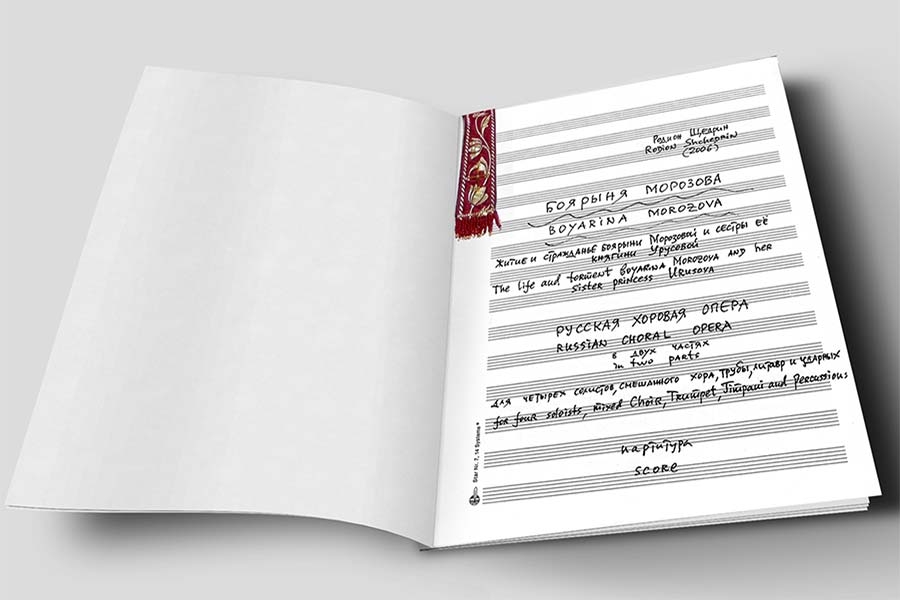 In Rodion Shchedrin’s biography, the genre of opera was long on the peripheries, the composer but rarely turning to it – at intervals of ten to fifteen years. It was only in the 21st century when he produced three operas – The Enchanted Wanderer (2002), Boyarina Morozova (2006) and The Lefthander (2012–2013) – that Shchedrin came to the forefront of contemporary opera composers. This occurred, of course, not just because of the quantity of works but, first and foremost, because of the artistic merits of these opuses. In his operas, Shchedrin turns to “eternal” themes important for Russia: the meaning of human existence, life, its values and worth, the soul and faith, Russia, its people and the authorities, its fortunes and its misfortunes.

Boyarina Morozova (the full title is The Life and Sufferings of Boyarina Morozova and Her Sister Princess Urusova) is a “Russian choral opera in two parts for four soloists, mixed chorus, trumpet, kettledrums and percussion.” The libretto was written by Shchedrin himself after The Life of Boyarina Morozova, Princess Urusova and Maria Danilova, The Hagiography of the Archpriest Avvakum, the letters of Avvakum to his parishioners Morozova and Urusova and his Lament for Three Confessors. Shchedrin considered the concept of this opera for many years, though as he himself admits the key to its embodiment came only when the opera’s choral slant became defined (which, in turn, led to a rejection of the orchestra).

Shchedrin sees the 17th century Hagiography as Russia’s Passions, and thus there is a logical association with the most outstanding examples of that genre – such as Johann Sebastian Bach’s Passions. The similarities lie first and foremost in the use of the chorus as a co-participant in the action (repeating the evil and cruel words of Tsar Alexei Mikhailovich and other persecutors of the heroines not mentioned in the opera) and as a commentator and witness that pities the poor victims. A parallel may be drawn with another famous work – Vasily Surikov’s painting Boyarina Morozova (1887), for many years the only response in Russian art to this tragic story. As in the opera, in Surikov’s painting all the people are co-participants in the event – the curious, those triumphing over the boyarina and those pitying her. But in his depiction of the image of the female protagonist, the famous Old Believer Feodosia Morozova, Shchedrin remains independent – both from the artist’s interpretation and from the portrait drawn in the tale and the works of Avvakum. With Surikov this is depicted as adamantine spirit and fanatical belief. Avvakum’s description of the boyarina is like poetry: “Your fingers are delicate, your eyes blaze with lightning and you attack your enemies like a lion.” The image of Morozova is most multifaceted in the Hagiography: she appears as a saint as well as a normal person, even experiencing fear (“Feodosia was terrified to understand that the torturers were coming...”). Shchedrin himself selects only the main features of her character: courage, resolution in faith and love and tenderness for her sister and son. Since its premiere in October 2006 at the Great Hall of the Moscow Conservatoire the opera Boyarina Morozova has yet to be staged as a production. One possible reason is the distinctly oratorical nature of the work which demands a highly particular and radical directing approach. It is unlikely that Boyarina Morozova can expect an easy future on the stage, but there is no doubt that this work may already be considered one of the finest operas of the early 21st century.
Vladimir Goryachikh

Premiere: 30 October 2006, The Great Hall of the Moscow Conservatoire
Premiere at the Mariinsky Theatre: 22 June 2014

Performance duration 1 hour
The concert has no interval