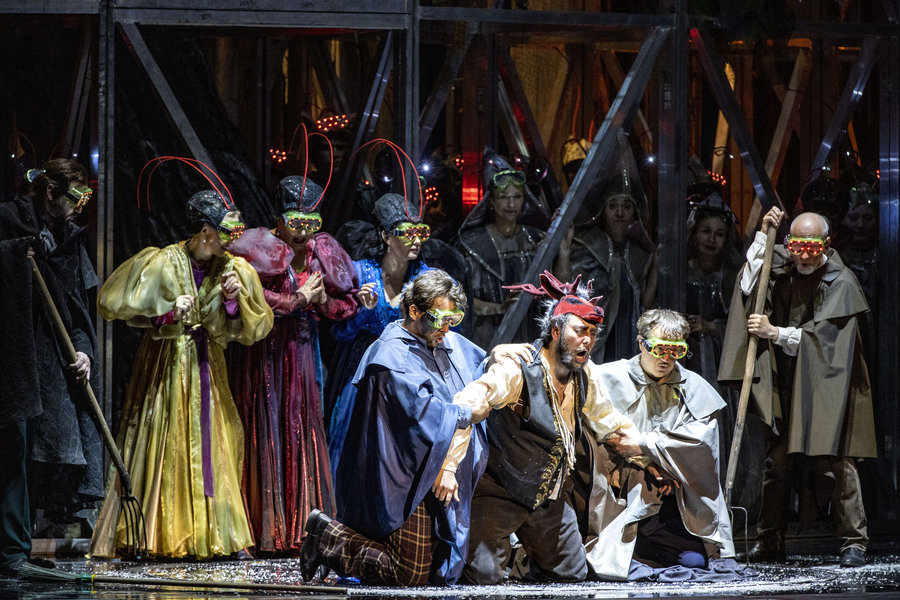 Windsor in the times of King Henry IV

Act I
Scene 1
Dr Caius storms into the Garter Inn: Falstaff’s drinking companions Bardolph and Pistol having robbed him bare the day before. Falstaff sends the hard done-by doctor away. He reproaches his friends with their ‘dirty work’ and explains that robberies require skill and time. Sir John is not very well-off himself: his purse is empty; he cannot pay the bill. However, the attentions of two Windsor ladies, the wives of rich husbands, may help his poor situation. Falstaff has written love letters to them and asks his friends to deliver the messages. Bardolph and Pistol refuse to deliver Falstaff’s letters, believing it to be dishonourable. Falstaff is enraged; he sends his page to deliver the letters. Then Falstaff cynically delivers a monologue on the meaning of honour in the modern world, takes a broom and throws out his drinking companions.

Scene 2
The merry wives of Windsor, friends Alice Ford, Meg Page and their neighbor Mrs Quickly meet in Ford’s garden. Nannetta, the Fords’ daughter, is there too. Reading the letters from Falstaff, who has not even bothered to change the text and has sent each woman an identical letter, they are enraged. The women decide to take revenge on their luckless admirer.
At the other end of the garden, the men are discussing their own revenge plan. Bardolph and Pistol warn Ford of the old rogue’s plans. Dr Caius and young Fenton are there, too. Fenton has joined the company so he could meet with his beloved Nannetta. While the ladies and the gentlemen are discussing their respective plans, the love birds can have a couple of moments to themselves. Ford decides to gain Falstaff’s trust in order to find out what he has in mind.

Act II
Scene 1
Falstaff condescendingly accepts Bardolph and Pistol’s repentance, who have seemingly come to the Garter Inn to confess. But in fact they have come not just to confess, they have brought Mrs Quickly with an answer from Meg Page and Alice Ford. Mrs Quickly tells Falstaff that both women are madly in love with him and Mrs Ford has even appointed a rendezvous.
The minute Mrs Quickly leaves, Bardolph ushers in Ford, disguised as a businessman called Fontana. Ford gives Falstaff a tightly stuffed wallet, persuading him to help seduce Alice. Falstaff assures Fontana of his success in the affair: as it happens, Alice’s husband is absent and he plans to visit her. Ford is furious and jealous. He envisages how he will punish his unfaithful wife. However, he maintains self-control and leaves the hotel with Falstaff, who has decked himself out in fine clothes.

Scene 2
At Ford’s house the merry wives are laughing and preparing for the rendezvous with Falstaff. They bring in the laundry basket, open up the folding screens. Falstaff enters in his finery and begins to make his move on Alice, who is alone. Unexpectedly, Mrs Quickly enters and warns the couple about Meg’s coming. Terrified, Falstaff hides behind the screens. When Meg, feigning terror, tells Alice about her husband’s alleged arrival, Ford actually bursts into the room with a crowd of witnesses. He searches for Falstaff high and low, even checks the laundry basket. With Falstaff nowhere around, the jealous Ford rushes to search the other rooms. The women hide Falstaff in a laundry basket, while Nannetta and Fenton, seizing their moment, hide behind the screens. Soon Ford hears kissing sounds. Enraged, he destroys the screen and sees the confused lovers. The infuriated Ford continues his search. Alice has the servants dump the contents of the laundry basket into the gutter outside. She invites her husband to see Sir John’s current whereabouts.

Act III
Scene 1
Before the Garter Inn, Falstaff tries to resign himself to his humiliation. Old Sir John is feeling lonely and forlorn. His hair is now salt and pepper and his time will come soon. The host brings some hot wine and Falstaff's spirits are instantly lifted. Suddenly Mrs Quickly appears with a letter from Alice. Falstaff wants to throw her out, but she claims that Alice has nothing to do with what has transpired. On the contrary, Alice wants to see him again and appoints a midnight meeting at Herne’s Oak in the Windsor Park. Mrs Quickly explains that Falstaff has to disguise himself as Herne the Hunter, who has hanged himself from the oak. No-one will recognize Falstaff as the place has long been reputed to be haunted by Herne’s spirit. ‘Love loves mystery’, Mrs Quickly explains. The whole Ford family, Meg, Fenton and Caius witness the scene.
Convinced of Falstaff’s simple naivety they plan to dress up as fairies, elves, witches and evil spirits to scare the living daylights out of him. Ford promises Caius to betroth him to his daughter that same night. He will bless the disguised pair, the monk and the queen of fairies. Mrs Quickly accidentally overhears the conversation and decides to disrupt the plan.

Scene 2
At midnight, Fenton searches for Nannetta in the Windsor Park. She hears his voice and hurries to meet him. The meeting is cut short by Alice. She convinces the couple that they need to follow her instructions if they hope for a happy ending. Falstaff appears on the stroke of midnight. He is dressed as Herne the Hunter. He sees Alice and rushes to confess his passionate love for her. A cry for help can be heard in the distance and the coquette feigns terror and escapes. Terrified, Falstaff falls to the ground. He is surrounded by ‘supernatural creatures’. Nanetta delivers a spell. The masked jokesters attack the old knight, pinch him, lash him with nettles, role him on the ground, poke fun at him and insult him until he repents of his sins. Then they all remove their masks and the astounded Falstaff realises that he has been duped.
But this is not the only revelation of the magical evening. Ford’s planned engagement of Nannetta to Caius miscarries, and thanks to Alice’s slyness Nannetta becomes engaged to Fenton, while Caius is engaged to Bardolph dressed as a fairy. Falstaff is glad that he is not the only one who has been made a fool of and declares:

All the world is a joke!
Man is born a jester!
Seriousness merely
Clouds the reason.
We all are fools!
And every man
laughs at the others’ folly.
But he laughs well
Who has the last laugh.


Verdi nurtured the concept of this comic opera for almost forty years. Contemporaries imagined that Verdi did not possess the gift of comedy, the more so as the composer’s only attempt in the genre at the outset of his career had been the now forgotten Un giorno di regno which was a dismal failure.
Before the premiere of Falstaff the composer occasionally spoke and wrote of that “great sentence”, as he himself described it, with echoes of that selfsame mental anguish. And yet, after the successful premiere of Otello in 1887, and being aware of Verdi’s secret dream, his librettist and friend Arrigo Boito at last, decades later, produced a scenario based on Shakespeare’s The Merry Wives of Windsor and comic episodes from the Henry IV chronicles. Verdi decided to take a risk and ended up composing something unusual and unexpected. At the gala premiere of Falstaff in Milan in 1893 the public saw a different Verdi.
Falstaff is a grand musical and theatrical cocktail. It contains elements of Italian situation comedy (opera buffa), French comic opera and the fairy-tale opera, it has the pace and vibrancy of the dynamic finales of Mozart’s Le nozze di Figaro and the warm intimacy typical of Rossini’s style.
The musical fabric of Falstaff ruthlessly combines elements of high genres: early church music, a love madrigal and “serious” instrumental music – just take the mocking “Amen” in the first scene, performed by servants as a canon, or the fugue in the finale – a rare visitor to the operatic stage (it is rumoured that Verdi had heard its somewhat “angular” theme in a child’s singing).
And there are sad notes in Verdi’s Falstaff. In the midst of the merriment you can just catch a barely perceptible trace of melancholy. This sadness appears openly only once, at the start of Act III, for a short time, when it becomes clear that Falstaff is suffering. It is not even so much that he is lonely but that his time has passed. Shakespeare’s play contains this idea too: however much of a scoundrel Falstaff may be, he is noble and in Henry IV he acts accordingly. In The Merry Wives of Windsor he is placed in a new and unfamiliar environment: a new ruling elite and middle-class bourgeois like Ford. Here, too, Falstaff is ridiculed and dragged through the mud. Like a big child he plays with the world but the world no longer has any need of him.
Perhaps this links Verdi himself to his character? Perhaps Falstaff was a farewell to theatre – after all, the elderly Verdi must surely have known that he would not, in all probability, complete any more grandiose operas. And, perhaps, this explains the great number of obscure citations and semi-hints at music of the past, particularly the theatre of the past and, especially, Verdi’s own past.
Daniil Shutko

Running time: 2 hours 40 minutes
The performance has one interval