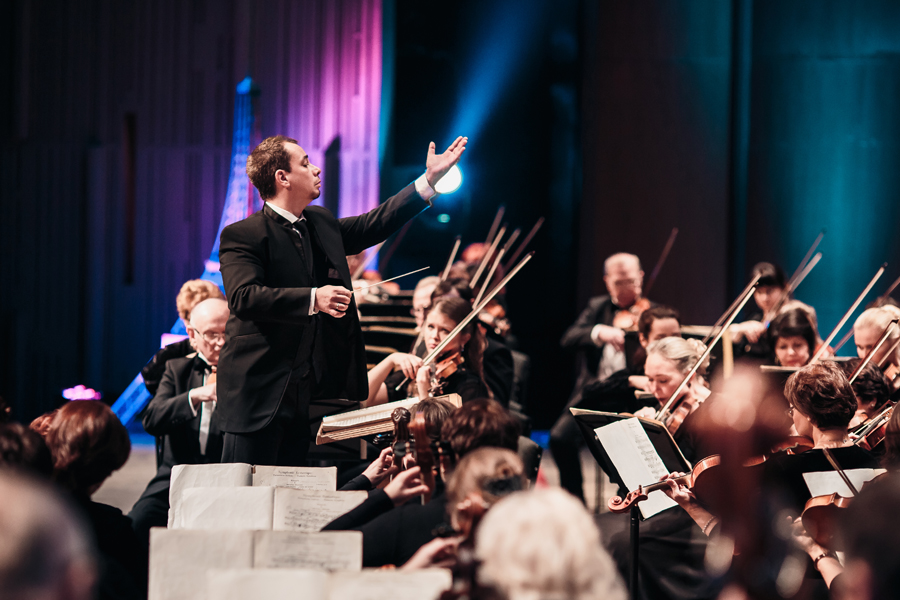 PROGRAMME:
Dmitry Shostakovich
Piano Concerto No. 1 in C minor, Op. 35
Suite from the ballet The Bolt
Symphony No. 5 in D minor, Op. 47

The Siberian State Symphony Orchestra was established at the Krasnoyarsk Regional Philharmonic in 1976. The ensemble’s first season was launched in April 1977, and the first concert was conducted by Vladimir Svoysky at the Krasnoyarsk Pushkin Drama Theatre. From 1978 to 2003 the orchestra was directed by the conductor Ivan Shpiller, the last student of Alexander Gauk. Its expansive and broad-ranging repertoire was based on works from the classical Russian symphony music legacy.

Since 1989 the ensemble has frequently toured throughout Russia and internationally (Argentina, Peru, Uruguay, Chile, the Netherlands, Switzerland, Yugoslavia, Estonia, China and South Korea). In 1993 the orchestra was awarded “Academic” status.

The next stage in the orchestra’s artistic activities was linked to its work with Mark Kadin, who led it from 2004 to 2014. In this period the orchestra expanded its repertoire, presented numerous rarely performed works (including premieres in Krasnoyarsk), frequently collaborated with acclaimed soloists, was involved in education and enlightenment programmes with young people and performed charity concerts. In 2009 it was awarded the status of being a particularly meritorious cultural asset of Krasnoyarsk’s heritage.

Since 2015 the orchestra has been led by Vladimir Lande. Thanks to him, Krasnoyarsk audiences have been introduced to such rarely performed works as Weinberg’s Suite for Orchestra and have heard Schubert’s Ninth Symphony, Berlioz’ Symphonie fantastique, Rimsky-Korsakov’s Schéhérazade and Beethoven’s Egmont overture among other scores. Experimental projects aimed at “growing” the audience have enjoyed great success; these include Extreme Classics, Scents of Spring, Ice Symphony and Cultural Capitals of the World. On the initiative of Vladimir Lande, 2016 saw the launch of the project A Symphony of Siberia, the aim of which has been to invite contemporary composers to collaborate with the Siberian State Symphony Orchestra.

The orchestra collaborates with recording companies including Naxos, Melodiya, Parma and Navona among others. In 2017 a disc featuring Weinberg’s Seventeenth Symphony (Memory) and Suite for Orchestra, recorded by the ensemble under Vladimir Lande for the Naxos label in 2016, was included in the Quarterly Critic’s Choice list of the Preis der deutschen Schallplattenkritik.