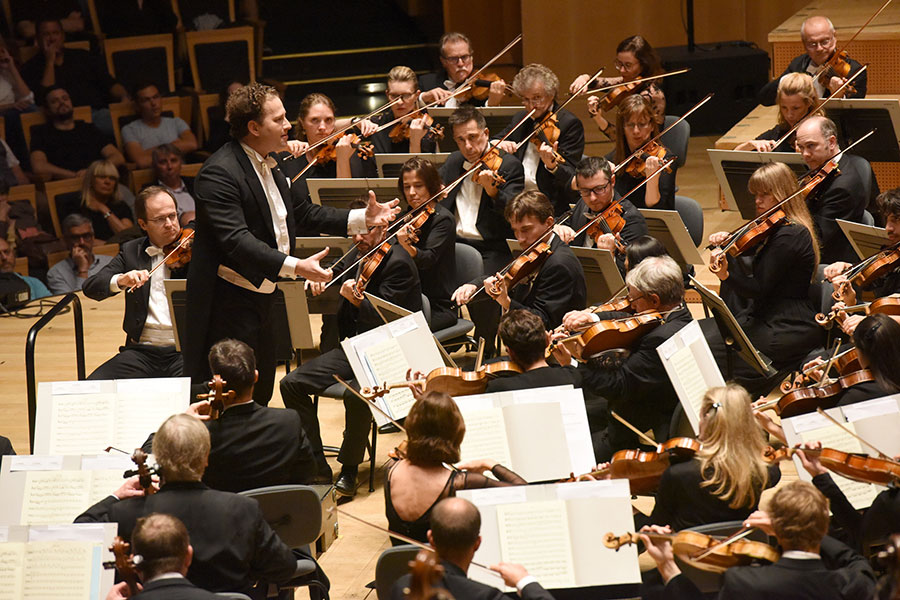 The Orchestre National de Lyon (ONL) has a core of 104 permanent musicians. Nikolaj Szeps-Znaider is Music Director Designate, beginning his tenure in September 2020. Its current Music Director Laureate is American conductor Leonard Slatkin, who was Music Director from September 2011 to June 2017. Successor to the Société des Grands Concerts de Lyon, founded in 1905 by Georges Martin Witkowski, the ONL became a permanent orchestra in 1969 at the instigation of the City of Lyon Council cabinet member for culture, Robert Proton de la Chapelle. Following Louis Frémaux (1969–1971), it has been under the successive musical direction of Serge Baudo (1971–1987), Emmanuel Krivine (1987–2000), David Robertson (2000–2004) and Jun Märkl (2005–2011). The ONL has the privilege of rehearsing and performing in its own dedicated venue, the 2,100-seat Lyon Auditorium.
Admired for its particularly French sound quality, which has led to its renown for performing Ravel, Debussy and Berlioz, the ONL has a vast repertoire, from the 18th century to the modern day. It regularly commissions works from contemporary composers such as Kaija Saariaho, Thierry Escaich and Guillaume Connesson, composer in residence for the 2017–18 season. Its rich repertoire is reflected in an extensive discography, including the complete works of Ravel and Berlioz, currently on Naxos.
The ONL fully supports education and public outreach. In 2017 the Orchestre National de Lyon is launching a musical and orchestral community educational project called Démos in the Métropole de Lyon.
Aside from its concerts in the Auditorium, the ONL also performs in the greatest concert halls across the world (Carnegie Hall in New York, Berliner Philharmonie, Gewandhaus Leipzig, Suntory Hall in Tokyo, National Centre for the Performing Arts in Shanghai…). In 1979 it was the first European symphony orchestra to perform in China.