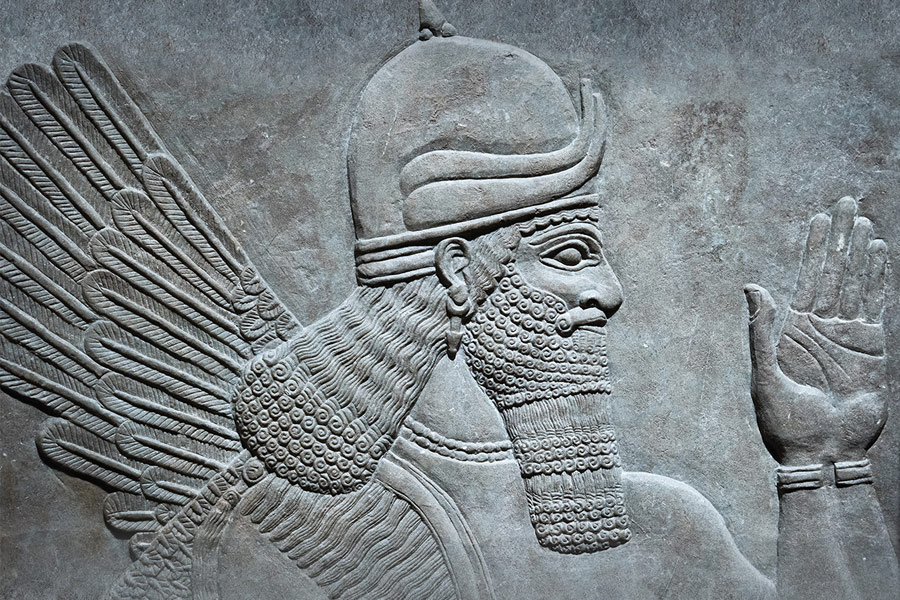 Act I: Jerusalem
The Jews are praying that the Assyrian hordes who have laid siege to Jerusalem will be scattered and that the Throne of David will be freed of the impious. The high priest Zaccaria tells of hopes for their deliverance – the Jews have taken Fenena, Nabucco´s youngest daughter, and she will act as a powerful bargaining weapon in the talks with the King of Babylon.
The commander Ismaele brings news that Nabucco has launched an attack. Zaccaria wishes to entrust Ismaele with guarding Fenena, but it turns out that the young people are in love with each other… Ismaele swears he will free his beloved.
Babylonian warriors burst in, headed by Abigaille, Nabucco´s eldest daughter who is also in love with Ismaele… Abigaille proclaims Nabucco´s glory. Finally the King of Babylon himself enters. Fenena rushes to her father then to Ismaele, but Zaccaria manages to catch her and raises his dagger over her. Nabucco tries to gain time, while Abigaille hopes that now her sister and rival will die. Suddenly Ismaele snatches the dagger from Zaccaria and frees Fenena. Defeated, the Jews are overpowered by the Assyrians; they curse Ismaele.

Act II: The Impious One
Once again Nabucco departs with his warriors for Judea, leaving Fenena on the throne. Meanwhile Abigaille has managed to obtain and destroy a document which states that in fact she is not Nabucco´s daughter but the daughter of slaves. The high priest of Baal informs her that Fenena has freed the captive Jews and that conspirators have already spread news of Nabucco´s death in order to proclaim Abigaille queen.
Zaccaria proclaims a new miracle of the God of Israel – Fenena, daughter of the King of Babylon, has adopted the Jewish faith. Once again the Levites curse Ismaele, but Anna tells them that Fenena, whom he saved, is from now on one of them, and so Ismaele is pardoned. Abdallo tells of the death of Nabucco and implores Fenena to flee, but she has no intention of surrendering the throne to her sister. As Abigaille tries to seize the crown from her Nabucco appears. The Assyrian warriors again swear allegiance to him. Nabucco orders the destruction of the Jews but Fenena tries to save them, declaring that she is one of them.
Nabucco declares himself God. Heaven punishes him by driving him insane. The crown is now in Abigaille´s hands.

Act III: The Prophecy
Abigaille´s triumph. The insane Nabucco enters. Abigaille deceives him into surrendering the ring with the seal in order to ensure the death sentence on the people of Israel is carried out. Nabucco understands that this means the death of Fenena too. In an attempt to save his daughter he reminds Abigaille of her slave roots; in return Abigaille shows him the fragments of the tablet stating her true birth. Nabucco is taken into custody.
Imprisoned by the Babylonians, the Jews recall their lost homeland. Zaccaria foretells the salvation of Israel and the fall of Babylon.

Act IV: The Broken Idol
In his dungeon cell Nabucco hears cries of "Death to Fenena!" In despair he rejects the idols of Babylon and turns to the God of Israel. Together with Nabucco´s loyal warriors, Abdallo frees his king and restores his crown.
The Jews are awaiting execution. Nabucco appears, proclaiming the God of Israel. Coming together, the Jews and Assyrians join him. Abigaille has taken some poison. With her dying words she begs forgiveness of Fenena and turns to Jehovah.

Verdi’s opera Nabucco is based on the Biblical story of King Nebuchadnezzar. In the Bible, this character has a split personality. On the one hand, Nebuchadnezzar is a cruel tyrant, a wicked torturer who sends three Hebrew boys into a fiery furnace. On the other hand, he is a wise ruler, in his own way favouring the captive Hebrew people and selecting as his spiritual interlocutor the prophet Daniel; he has travelled a long spiritual path from extolling material wealth to acknowledging God and making peace with Him. The name of Nebuchadnezzar is connected with the renaissance of Babylon and a renewed attempt to build the Tower of Babel. In the eyes of God, however, the king’s intentions are madness and Nebuchadnezzar is cursed: “King Nebuchadnezzar, to you it is spoken: the kingdom has departed from you! And they shall drive you from men, and your dwelling shall be with the beasts of the field. They shall make you eat grass like oxen; and seven times shall pass over you…”
In Temistocle Solera’s libretto the Old Testament motif of self-aggrandisement, punished by insanity and repentance, is woven together with plotlines that are either totally fabricated or borrowed from other sources. To the principal plotline, which afforded the composer the opportunity to depict the scene of the curse and Nabucco’s subsequent state of madness, the librettist joined the motif of collision between two peoples – the Babylonians and the Hebrews – and he added the theme of rivalry between Nabucco’s two daughters as well as including a traditional love intrigue. All of this was intended for the German composer Otto Nicolai, who in the event rejected the opera.
It was now 1840 – the worst year of Verdi’s life. In the course of twelve months his children had died from inexplicable diseases one after another, followed by his beloved wife Margherita. In the summer of 1840 Verdi was left completely alone and, moreover, bound by a contract, he was – supremely ironically – supposed to complete a comic opera (Un giorno di regno, ossia il finto Stanislao). The failure of the opera was the last straw for Verdi’s self-control. His resultant depression led Verdi to swear he would never write another opera.
The appearance of Nabucco – the first truly Verdian opera – occurred against the composer’s will. Despite his resistance, the composer’s destiny and talent forced him to write music. It could be said that it was with this opera that Verdi first appeared as his own self. In Nabucco we have the first truly Verdian hero – or rather heroine: the envious and perfidious Abigaille, daughter of the King of Babylon. It is of no importance that this is an entirely negative role. The important thing is her inner strength, temperament and passion. This was the first time Verdi created a role for a ‘frenzied soprano’ using contrasts in registers to heighten the character’s dramatic characteristics.
But the main dramatis personae in Nabucco are the chorus. The choral scenes are the true gems of this score. Verdi’s new musical intonation was meant to reflect the emotions of the crowd. This was how work on the opera began – the composer’s glance chanced to fall on a page of the open libretto with the words “Va, pensiero, sull’ali dorate…” The chorus of enslaved Hebrews – praying for salvation – and the Biblical hope they portray are, simultaneously, mournful, anxious and powerful, interspersed with the Psalm of David By the Rivers of Babylon, and together they inspired Verdi to create this glorious masterpiece.
Daniil Shutko


Running time: 2 hours 45 minutes
The concert has one interval