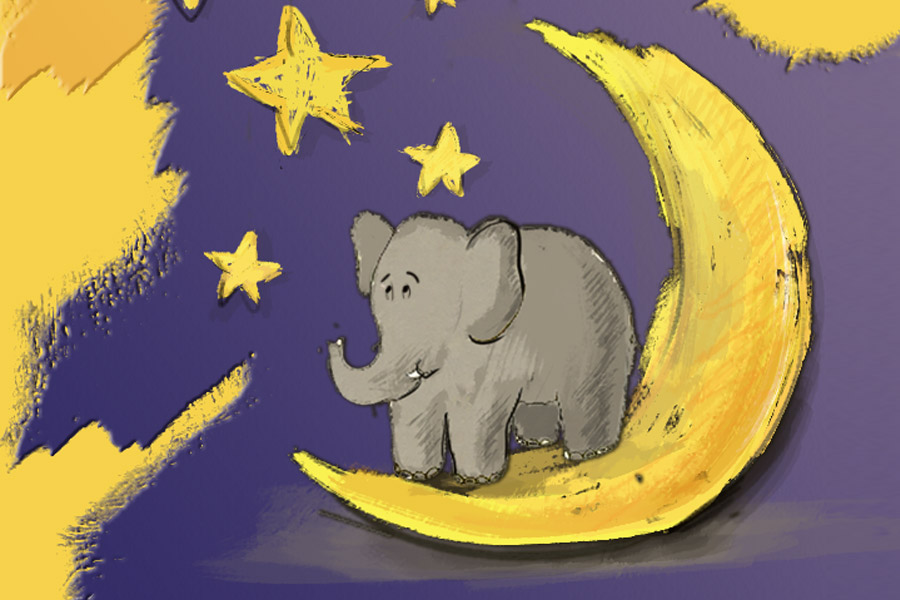 This is a story of Babar, a little elephant who lost his mother. An evil hunter killed her while she and Babar were walking in the forest. The little elephant, mad with fear, ran from the hunter and ran so fast that the hunter could not catch up with him. The hunter long behind him, Babar kept running and suddenly…Whoa! How different everything is! Such large houses, such beautiful streets! And those cars and buses! It was Babar’s first time in a town. But what is he to do? He is all alone. Fortunately, one noble lady who adored little elephants noticed Babar. She was so kind as to invite him to her place. They got on famously: they exercised together, had breakfast together, brushed their teeth together and even read books together! And yet the lady could not fully replace Babar’s mother. However beautiful the town and however interesting the town life, Babar missed his native forest, its dwellers and the stars which light up in the night sky.

Several years have elapsed. Babar, no longer a little elephant, grew up into an adult and wise elephant. Once, on his morning car ride, Babar suddenly meets his friends, elephants Arthur and Céleste. They go back to the forest together, where Babar is unanimously pronounced the new king. Babar marries Céleste and all the forest dwellers happily celebrate both the coronation and the wedding. The king and the queen live happily ever after, but in the evenings, when the stars light up in the night sky over the forest, Babar remembers his mother with sadness and quietly sings her berceuse.

During the summer of 1940, French composer Francis Poulenc stayed with his friends in the village. His 3-year-old niece Sophie was among the guests. When Poulenc was playing the piano, Sophie came up to him and put a pretty children’s book instead of the notes on his piano. The book was Histoire de Babar by Jean de Brunhoff. Inside the book were large colourful pictures and ‘hand-written’ text.

Artist and writer Jean de Brunhoff (who, by the way, was born in Paris in 1899, just like Poulenc himself) once heard his wife Cécile invent a story about a little elephant while putting the children to sleep. The elephant was named Babar, in honour of the famous circus elephant called Babá that performed at travelling fairs in the 19th century. His best act was called An Elephant at Dinner: Babá sat at the table, just like a man would, and had dinner strictly observing the rules of restaurant etiquette. The act was so popular that the name of Babá was heard all over Europe and other circus elephants were then often named after Babá.

Jean de Brunhoff wrote down the story of Babar and drew the pictures himself. The first book was soon followed by others; TV series and cartoons were made after the book. Jean de Brunhoff’s now-grown son Laurent, one of the boys who Cécile invented the elephant for, continued the Babar series. Even today, almost 90 years after the release of the first book, the cheerful elephant Babar remains everyone’s favorite.

Back then, in the summer of 1940, Sophie asked her composer uncle to “play” the story. Poulenc obliged and freely improvised around the narrative situations he read out from the book. He wrote down the best themes and melodies on paper, but finished working on the piece only 5 years later, in 1945. Later on, in 1959, another French composer and Poulenc’s friend Jean Françaix proposed an orchestral version of the piece. The British David Matthews also transcribed it for chamber orchestra.

The narrator tells the story about the unbelievable adventures of Babar, who has experienced terrible pain (his mother’s death), happiness in love (his wedding to Céleste), unexpected wealth (the money of the elephant-adoring old lady), and triumphant success (his being named the new king). His lines are interspersed with orchestral pictures. These music fragments are not long, but are very diverse and colourful. Here is mother elephant singing her tender berceuse to Babar; here is the horn sound of the car Babar received as a gift from his generous foster mother; here are the elephant mothers scolding their misbehaving children, who ran into the town from the forest without asking their permission. The orchestra imitates either the hurried pace of the elephant mothers (note: with their trunks up, so that dust would not settle into them), or the chirping of birds, or the march of camels. The composer never fails to showcase his inventiveness and sense of humour. However, the orchestra does not only reflect the outward appearances. There are touching music fragments which reflect the inner state of the main character, be it playfulness, sadness, horror, excitement, or dreaminess. There are scary moments as well, what with Babar’s mother’s being shot dead by the hunter (when the orchestra imitates the shot) or with the death of the elephant king who ate a poisonous mushroom (his death is portrayed through a series of chords, which quietly, slowly and unavoidably descend into the darkness of the lower register). The orchestra also plays various dancing tunes: an exquisite waltz introduces an elegant Parisian lady who ends up adopting Babar; one more waltz plays during a scene at a bakery, where the elephants are eating cakes (that is a throwback to the original circus elephant Babá); the wedding is also full of dancing, especially when the animals are dancing polka. A wonderful nocturne (a scene with stars in the night sky) is an epilogue concluding the story.
Khristina Strekalovskaya