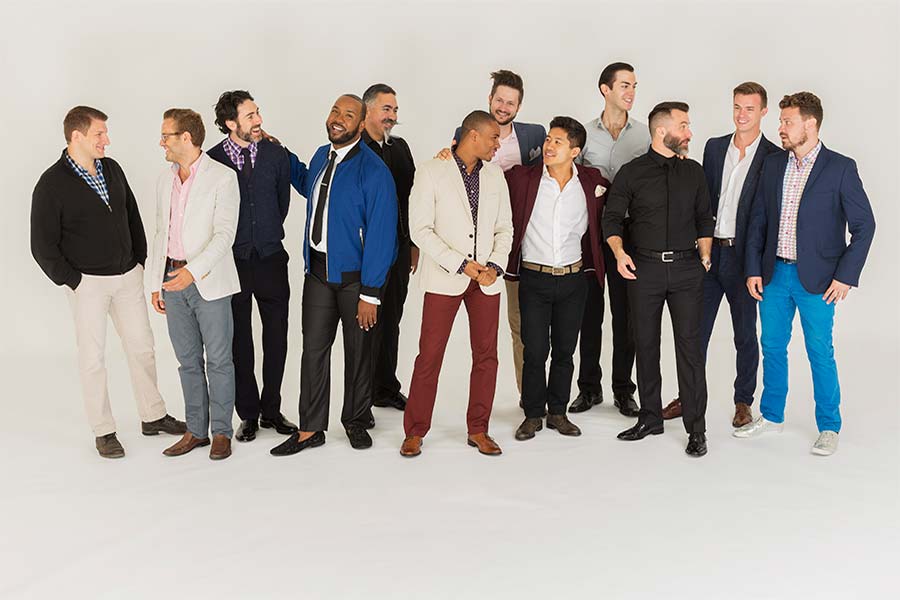 with the program Then and There – Here and Now

Celebrating 40 years of the ensemble

Stephen Sametz
I have had singing

I Want to Die Easy, spiritual (arranged by Alice Parker and Matthew Mazzola)

Called “the world’s reigning male chorus” by the New Yorker, the San Francisco based GRAMMY® award-winning ensemble Chanticleer celebrates its 40th anniversary in the 2018-19 season. During this season Chanticleer will perform 52 concerts in 23 of the United States, 27 in the San Francisco Bay Area, as well as numerous European cities including Dublin, Wexford, Paris, Luxembourg, Budapest, Prague, Hannover, Leipzig and St Petersburg. Praised by the San Francisco Chronicle for its “tonal luxuriance and crisply etched clarity,” Chanticleer is known around the world as “an orchestra of voices” for its seamless blend of twelve male voices ranging from soprano to bass and its original interpretations of vocal literature, from Renaissance to jazz and popular genres, as well as contemporary composition.

Chanticleer’s 2018-19 season is the fourth under the direction of Music Director William Fred Scott. Then and There, Here and Now, celebrating the group’s 40th Anniversary includes music by longtime favorite composers including Palestrina, Victoria, Stucky, Sametz, Bates, and others as well as a new work by Matthew Aucoin, and beloved arrangements by Jennings, McGlynn and others.

Since Chanticleer began releasing recordings in 1981, the group has sold well over a million albums and won two GRAMMY® awards. Chanticleer’s recordings are distributed by Chanticleer Records, Naxos, ArkivMusic, Amazon, and iTunes among others, and are available on Chanticleer’s website: www.chanticleer.org.

In 2014 Chorus America conferred the inaugural Brazeal Wayne Dennard Award on Chanticleer’s Music Director Emeritus Joseph H. Jennings to acknowledge his contribution to the African-American choral tradition during his 25-year (1983-2009) tenure as a singer and music director with Chanticleer. The hundred plus arrangements of African-American gospel, spirituals and jazz made by Jennings for Chanticleer have been given thousands of performances worldwide – live and on broadcast – and have been recorded by Chanticleer for Warner Classics and Chanticleer Records.

Named for the “clear-singing” rooster in Geoffrey Chaucer’s Canterbury Tales, Chanticleer was founded in 1978 by tenor Louis A. Botto, who sang in the Ensemble until 1989 and served as Artistic Director until his death in 1997. Chanticleer became known first for its interpretations of Renaissance music, and was later a pioneer in the revival of the South American baroque, recording several award-winning titles in that repertoire. Chanticleer was named Ensemble of the Year by Musical America in 2008, and inducted in the American Classical Music Hall of Fame the same year. William Fred Scott was named Music Director in 2014. A native of Georgia, Scott is the former Assistant Conductor to Robert Shaw at the Atlanta Symphony, former Artistic Director of the Atlanta Opera, an organist and choir director.