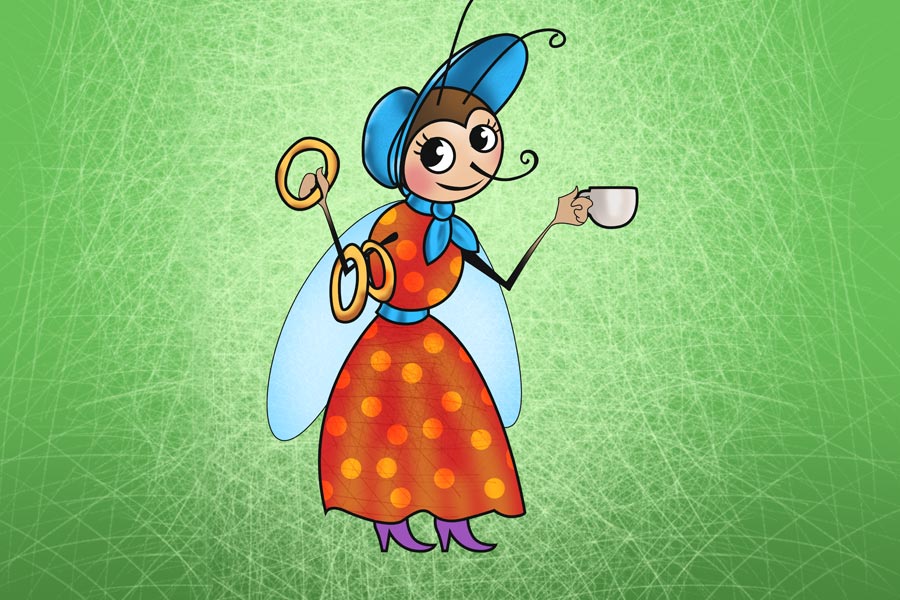 A magic tree is growing in a garden; instead of apples it bears stockings and shoes as fruit. Characters from Chukovsky’s fairy-tales appear: the Fly, the Mosquito, the Spider, the Grasshopper, the Bee, the Butterfly, Cockroaches and Fleas.

The Fly has found some money, purchased a samovar and, for her name day, has invited various other insects for tea. But the cunning old Spider has made plans to kill the birthday girl. She asks for help from her guests, but they have taken fright and hidden. The brave Mosquito comes to the aid of the poor dear, he saves his lady and offers her his hand and his heart. All the insects dance in joy. One special guest at the wedding is the charming Bee, who sings a song about the grandmother Toad and tadpoles.

Sergei Chechotko’s opera Chukokkala was written after motifs from rhyming fairy-tales by Korney Chukovsky, which have been read by several generations of young children.

The intricate title comes from combining two words: the surname of the author and the name of the small Finnish village of Kuokkala where he resided. The word was conceived by the Russian artist Ilya Repin, a neighbour of Chukovsky. Chukokkala is a manuscript almanac which was compiled by Korney Ivanovich Chukovsky over many years. It contains autographs of writers, musicians, artists and other great luminaries of the 20th century who were guests of Chukovsky. Sergei Chechotko’s Chukokkala is a magical land inhabited by characters from famous fairy-tales: the merry and enterprising Fly Tsokotukha, the perfidious villain the Spider and the fearless and noble Mosquito.

“The composition of the opera was based on fairy-tales, though it is aimed at both children and adults,” the composer narrates. “Children absorb it very well, and I would even go so far as to say they form a wonderful audience, one about which you can only dream. Of course, here, in places, the drama is not entirely for children, but somehow they understand it in their own way.”

This year the adventures of Chukovsky’s favourite characters may be seen at the Prokofiev Hall in a production staged by Alla Chepinoga. The work of this stage director (the operas Terem-Teremok, L’Histoire de Babar, le petit éléphant, The Turnip and The Silly Little Mouse and the concert programmes Le Carnaval des animaux, Russian Fairy-Talesv and French Fairy-Tales) have already won over young theatregoers at the Mariinsky Theatre.

“Children love horror stories, and in Korney Chukovsky’s work there are many mysterious and even dangerous characters: Moidodyr, the Crocodile and Barmalei. Such frightening stories can be very useful, because they are a kind of rehearsal tool, they prepare children’s minds for actually coming across and dealing with possible difficulties in life. Young audiences of Chukokkala will meet the wicked Spider who has resolved to kill the Fly. The fearless Mosquito, however, of course comes to her assistance. I hope that in empathising with the hero, who travels a path fraught with danger in order to save the birthday girl who faces disaster, each child in the auditorium will feel involved in the action, and sense that feeling of conquering fear which is so important in the development of a person’s character. The story’s happy end is equally important for young children: the triumph of good over evil and the restoration of justice. And those in the auditorium who witness the joyous denouement will also find themselves invited to the wedding of the Mosquito and the Fly and try to solve the curious and, at times, complex riddles of Korney Chukovsky,” says Alla Chepinoga.
Olga Vokina


Premiere at the Mariinsky Theatre: 16 November 2019