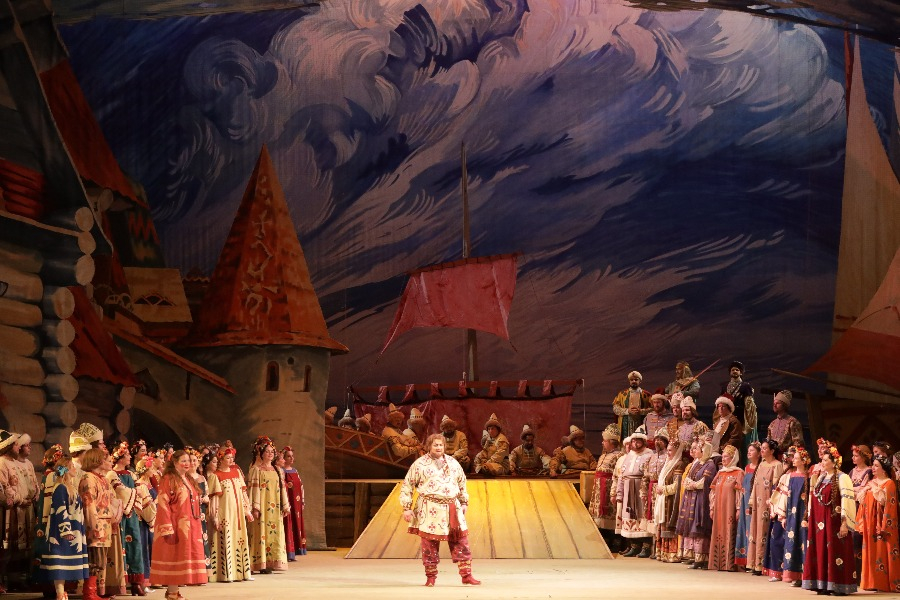 Novgorod and on the open sea, in half-legendary, half-historical times.

Act I
Scene 1.
The merchants of Novgorod are sitting down to a feast, rejoicing in their prosperity. Nezhata, a singer and gusli player from Kiev, sings about the heroic days of his city’s past. The merchants would like one of their own countrymen to sing about their town and the minstrel Sadko, who enters at that moment, is asked to oblige. But his song disturbs them: Novgorod is on a lake, he sings, with no access to the ocean. If only their ships could reach the sea they would bring back fortunes from all over the world. The merchants laugh at him and send him on his way, and the feast continues with singing and dancing.

Scene 2.
On the shore of Lake Ilmen Sadko sings of his sadness and disillusionment: “Oh, yon dark forest”. Sadko’s song is heard by some young maidens. Amongst them is Volkhova, daughter of the Sea King. He sings for them again and they dance. Volkhova tells him that he has won her love. As dawn breaks, they part, but Volkhova tells Sadko that he will catch three golden fish in the lake, that he will make a journey to a foreign land, and that she will faithfully await his return. She returns to the deep and the kingdom of her father. The sun rises.

Scene 3.
Sadkoґs wife Lyubava is lamenting her husbandґs absence. Has he gone to seek adventure far away? It was only yesterday that he assured her of his love. Sadko enters and she rejoices, but is broken-hearted when he soon leaves her again, crying out “Farewell!”

Act II
Scene 4. 12 years have passed.
The port of Novgorod on Lake Ilmen. Ships lie peacefully at anchor and the townspeople crowd around the rich foreign merchants who have arrived from every land known to man. Soothsayers ply their trade, Nezhata sings to the accompaniment of his gusli, buffoons sing and dance, and a pilgrim’s chant can be heard. Sadko appears and is greeted with laughter, which increases when he tells them that he has learned a secret: there are golden fish in the lake. He bets his head against the wealth of all assembled at the port that he can prove the truth of his words. A net is set and the song of Volkhova, the Sea Princess, is heard. Sure enough, when the net is pulled in it contains three golden fish. Sadko invites all the adventurous men of the port to join him on his forthcoming journey and they go off to make their preparations.
Nezhata sings of the nightingale which became a great merchant. Sadko returns and announces that he will restore to the merchants their wealth, but he intends to keep their ships. He asks three merchants, a Viking, a Venetian and an Indian, to sing of their native lands so that he may decide which he should visit. The Viking sings first: his country’s shores are rugged, the sea rough, and his countrymen fierce warriors. This slow, pleasant aria is one of the most famous in the Russian bass repertoire. Next comes the Indian merchant. His music and his story are of a much more exotic cast. India is a land of gems and mystery, he sings the stuff of which dreams are made. The last of the merchants is the Venetian, a baritone, who sings a gondolier’s song or barcarole. Sadko decides that Venice is for him and sets sail.

Act III
Scene 5.
Sadko is returning home, his ships laden with treasure. But they are becalmed, and Sadko decides that this is because in all the twelve years they have been away, they have never once made a sacrifice to the Sea King. The sailors pour treasure over the side into the water, but still there is no wind. At Sadko’s command, the sailors next throw logs overboard: Sadko’s sinks and he descends a ladder to the water’s edge, stepping onto a plank which has been thrown into the water. A breeze picks up immediately and the ship sails away, leaving Sadko abandoned. A mist settles.

Scene 6.
When the mist clears we find ourselves at the bottom of the sea, at the court of the Sea King. The king and queen are seated on their thrones while Volkhova, their daughter, sits spinning seaweed. Sadko sings for the king and queen and is promised Volkhova’s hand in marriage. The wedding guests arrive – every denizen of the deep seems to have been invited and the marriage is celebrated in a fitting manner. There are dances and Sadko sings again, arousing such enthusiasm that the listeners join in the dance. As their movements become faster and faster, the waves lash into a fury and ships sink down into the deep. An apparition then warns them that the reign of the Sea King is at an end and seagulls draw Sadko and Volkhova away in a shell.

Scene 7.
Morning. Sadko is asleep on the shore of Lake Ilmen, watched over by Princess Volkhova, who sings a lullaby. She bids a last farewell to the still-sleeping minstrel and then vanishes in the mist, turning into the great River Volkhov, which flows from Lake Ilmen to the sea. Lyubava is distractedly searching for her husband. When she sees him asleep on the shore of the lake she is filled with delight. Sadko awakes. He thinks he has been asleep since he last parted with her, that his voyage was only a dream. But the sight of his fleet sailing up the new river from the sea tells him that it was all real, and that he is now the richest man in Novgorod. He is welcomed by the citizens of the town, among them the three merchants who sang for him before he set out on his long journey.

“In the rich mansions of the fraternity in Novgorod. Trading merchants of Novgorod are enjoying a lively feast. All are seated at oak tables covered with patterned table cloths and laden with food and drink. Servants bring the guests wine and fire-water. Seated at a special table is Nezhata, a young gusli-player from Kiev-City. In a corner, on a tiled stove, are seated Sopel and several swashbuckling jesters. Among the guests are two regulars: Foma Nazarych and Luka Zinovich.” It is a grand feast for the fraternity, dressed in their clothes embroidered with myriad patterns and the tiled stove richly decorated. Even Rimsky-Korsakov’s own comments in his score for the opera Sadko were written in the “Old Russian style”, heavy with archaic lexis and expressions. The composer, much in love with Russia-of-old, found sources of inspiration in northern tales and legends – about the rich gusli-player and merchant Sadko, about the dashing troublemaker Vasily Buslayev and about the mighty bogatyr Volkh Vseslavich. The sonorous timbre of Rimsky-Korsakov’s guslis – following in the footsteps of Glinka – is depicted by a combination of the piano and the harp. The rhythms of this epic in verse are conveyed by complex measures – right up to and including eleventh in the chorus “The day will be beautiful in half a day’s time” (ten syllables in Russian, chanted in unison by male voices; eleven beats to one bar), which engendered the popular myth about choristers tormented by Rimsky-Korsakov’s “impossible” rhythms. In the opera there is even a “direct inclusion” of the Russian epos, recorded texts and melodies taken from living bearers of the tradition – a first in the history of the genre of opera.

And yet in addition to the epic, the opera Sadko has another side – that of the fairytale. The composer himself indicated this in a remark that determined the time-setting: “semi-fairytale and semi-historical”. As a composer and fairytale narrator, Rimsky-Korsakov knew no equal; his “magical” chords, gammas and orchestral colours sparkle and shimmer, like silver-scaled and golden-finned fish in the depths of the blue-green waters of Lake Ilmen. The protagonist is part of both worlds and associated with each of them – as the husband of two women: one real, one fairytale, one of the earth and one of the water. The love triangle in Sadko exists beyond the confines of the laws of geometry: its peaks lie on varying planes, and so the character’s bigamy escapes the laws of morality. A semi-fairytale and semi-history, Sadko nevertheless is not bereft of yet another element so important for 19th-century musical theatre – that of lyricism. In this extravagant and highly decorative score it does not appear so very much, though it is more gripping because of that – particularly when the cold sea maiden Volkhova sings her lullaby warmed by human passion “A dream walked along the shore”.

At the Mariinsky Theatre Sadko is performed using the production by Alexei Stepanyuk – featuring sets revived from sketches by Konstantin Korovin. Rimsky-Korsakov’s aesthetics were incredibly close to those of the great Russian designer. Writing of his work, the theatre decorator noted: “I wanted the eyes of the audience to have as much aesthetic pleasure as the soul’s ears received from the music. With unexpected forms and a fountain of colours I wanted to excite people’s eyes from the stage, and I saw that I was giving them something of joy and interest.” The Mariinsky Theatre invites its audiences to experience this joy. Khristina Batyushina


World premiere: 26 December 1897, Mamontov’s Opera on the stage of the Solodovnikov Theatre, Moscow
Premiere at the Mariinsky Theatre: 26 January 1901
Premiere of this production: 5 March 1993

Age category 6+
00:00
Update Required To play the media you will need to either update your browser to a recent version or update your Flash plugin.

Scene I, “If I had a chest of gold…”
Vladimir Galuzin as Sadko, the Mariinsky Orchestra, conductor: Valery Gergiev.
Recorded in October 1993