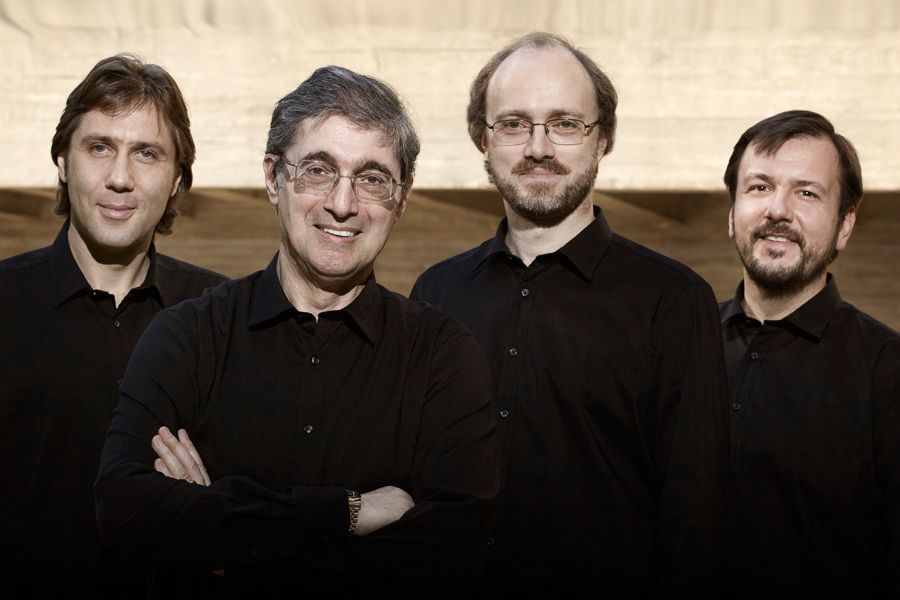 Alexander Borodin
String Quartet No. 1 in A major

The history of the Borodin Quartet dates back to 1945 when, in the chamber music class of Professor Mikhail Terian at the Moscow Conservatoire, a string quartet emerged comprising Rostislav Dubinsky (first violin), Vladimir Rabei (second violin), Yuri Nikolaevsky (viola) and Mstislav Rostropovich (cello), the latter soon to be succeeded by Valentin Berlinsky. In 1946 the quartet, then still a student ensemble, became affiliated with the Moscow Philharmonic. Soon Vladimir Rabei and Yuri Nikolaevsky were succeeded by Nina Barshai and Rudolf Barshai.

From its very first years, the quartet stunned audiences with the sheer variety of its repertoire. Alongside classical quartets the musicians essentially immediately began to include works by contemporary Soviet composers in their programmes. In just five seasons they performed roughly one hundred such pieces of music. Composers whose works the quartet’s musicians performed included Sergei Prokofiev, Nikolai Myaskovsky, Dmitry Kabalevsky, Mieczysław Weinberg, Boris Tchaikovsky, Herman Galynin, Yuri Levitin, Nikolai Peiko, Vissarion Shebalin, Edison Denisov and Alfred Schnittke among others. The quartet was the ensemble chosen to premiere many works, which were also dedicated to the orchestra.

In 1955, following a dazzling performance of works by Alexander Porfiryevich Borodin, the ensemble was named in his honour – the Borodin Quartet. The ensemble’s second decade (1955–1965) proved to be a time of impetuous creative growth for the musicians. By this time the second violinist was now Yaroslav Alexandrov and the violist Dmitry Shebalin, son of the composer Vissarion Yakovlevich Shebalin. The new ensemble (Rostislav Dubinsky, Yaroslav Alexandrov, Dmitry Shebalin and Valentin Berlinsky) carried on for over twenty years until the mid 1970s.

In 1950 the quartet began to collaborate with Sviatoslav Richter, and this collaboration was to last more than forty years. In 1975 the quartet’s “first violinist” Rostislav Dubinsky left the USSR. It was at roughly at the same time that violinist Yaroslav Alexandrov was compelled to make his exit from the quartet due to ill health. Young musician Mikhail Kopelman, then already the leader of the Moscow Philharmonic, was appointed the orchestra’s first violinist. Second violinist Yaroslav Alexandrov was succeeded by Andrei Abramenkov who for many years had played in the Moscow Chamber Orchestra. The new musicians of the “Borodinians” re-recorded Borodin’s quartets and this recording was hailed in Great Britain as “Best Recording of the Year.”

Of special note in the history of the ensemble is its collaboration with Dmitry Shostakovich which lasted more than thirty years. The “Borodinians” performed his quartets from the very outset of their careers to the composer’s dying days, always remaining in close contact with him. Shostakovich’s last public appearance as a pianist saw a performance of his own Piano Quintet together with the musicians of the Borodin Quartet. A 1986 recording of Shostakovich’s quartets by the Borodin Quartet marking eighty years since the composer’s birth has been re-released by international recording giants EMI and BMG. Recently the quartet signed a contract with Decca for a new recording of all of Shostakovich’s quartets. In March 2015 the first disc in the series was released. In June 2015 the quartet was awarded the Shostakovich Prize in Gohrisch (Germany).

The early 1990s once again saw a gradual revival and rejuvenation of the ensemble. In 1996 Ruben Aharonian was appointed first violinist in the quartet and Dmitry Shebalin was succeeded by Igor Naidin as violist. In 2007 Vladimir Balshin replaced Valentin Berlinsky and, in 2011, Andrei Abramenkov was succeeded by Sergei Lomovsky.

One of the quartet’s most significant achievements was a recording of all of Beethoven’s quartets on Great Britain’s Chandos label (2005), released to commemorate the ensemble’s sixtieth anniversary.