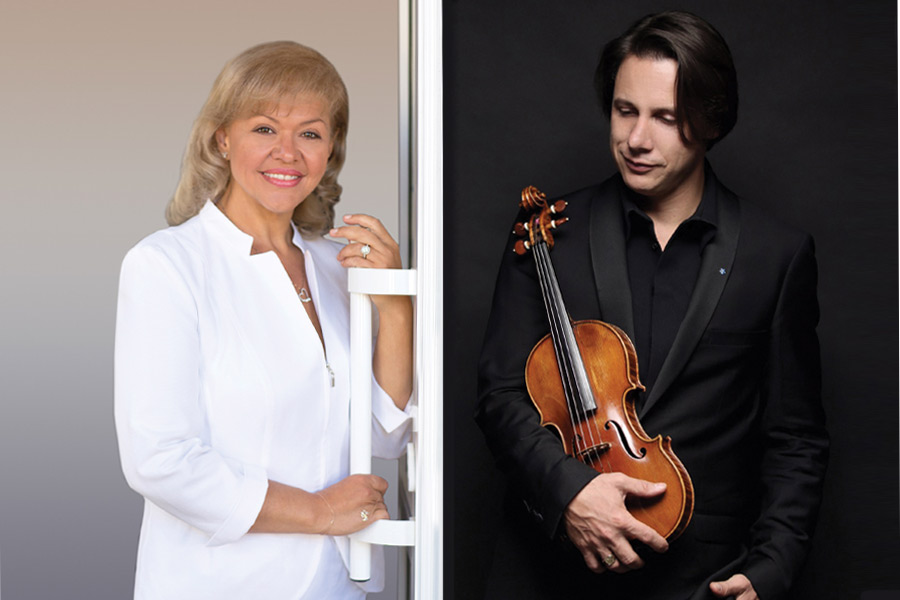 Svetlana Berezhnaya and Pyotr Nikiforoff have successfully toured the cities of Switzerland, Russia, South Korea, Japan, the Netherlands, Germany, Austria, France, and Italy. They give more than a hundred performances a year. The duo regularly collaborates with the radio broadcasting corporation RSI (Switzerland) and Radio Orfey. In 2016, the ensemble released the CD Vienna. The Dream Classics, double album Dancing in the Clouds, and a collection of three CDs Mozartiana. In 2017, the duo premiered its programme Rubies in Kislovodsk, Gdansk, and Lugano.

Svetlana Berezhnaya (organ, piano, harpsichord) graduated from the Gnessin Russian Academy of Music and the N.G. Zhiganov Kazan State Conservatoire, trained as an organist at the Brabant Konservatorium (The Netherlands). In 1992, she was a diploma-recipient at the Northern Palmyra international festival, in 1996 she took First Prize at the All-Russian Organ Competition, and in 2000 she was awarded the title of Honoured Artist of Russia. Berezhnaya has performed at prestigious concert halls and famous cathedrals throughout the world, among them the Great and Small Halls of the Moscow Conservatoire, the Tchaikovsky Concert Hall, the Concert Hall of the Mariinsky Theatre, the Great Hall of the St Petersburg Shostakovich Philharmonic as well as cathedrals in Moscow, Paris, Vienna, Brussels, San Antonio, New York, Freiburg, The Hague and Graz. In 2008, Quartzmusic released Svetlana Berezhnaya’s solo CD, Serene. The year 2013 saw the release of a recording made at Notre Dame de Paris during a concert marking the cathedral’s eight hundred and fiftieth anniversary, while in 2015 came a CD featuring Berezhnaya together with the Menestrelli early music ensemble Marking 350 Years of Johann Sebastian Bach. Berezhnaya’s discography also includes 16 albums, recorded on the Pyotr Kondrashin Classical Records label. She is the author of such books as The Tale of a Sandglass or I Keep Playing… (2010), How to Make Peace with Your Own Happiness… (2012), Love Can Inflict Good (2015), and a collection of poems The History of Love from Christmas to Christmas (2016).

Violinist and conductor Pyotr Nikiforoff studied at the Gnessin State Musical College in Moscow. He graduated from the Conservatorio della Svizzera Italiana di Lugano (violin, class of professor Carlo Chiarappa) and received the title of professor. He went on to study further as a conductor under Piero Bellugi in Florence (2000), Alain Lombard in Lugano (2003–2005), Jorma Panula in Amsterdam (2010), Diego Fasolis in Lugano (2013–2015), and Alexander Polishchuk in Saint Petersburg (2015–2016). Since 2015, Nikiforoff has performed with the Sochi Symphony Orchestra, the Academic Symphony Orchestra of the Samara State Philharmonic, and the Symphony Orchestra of the Kabardino-Balkaria State Philharmonic. In 2016, Nikiforoff has been the Principal Guest Conductor with the North Caucasian Safonov State Philharmonic. In 2016, he recorded seven CDs featuring the works of Mozart, Honegger, Mahler, Scriabin, Shostakovich, Bach, Poulenc, and Mendelssohn in collaboration with the Safonov Academic Symphony Orchestra. Since 2017, Nikiforoff has been a conductor with the Saint Petersburg House of Music. His engagements for the current season include a tour with the Safonov Academic Symphony Orchestra in Japan, South Korea, Austria, and Italy. Nikiforoff is a prize-winner of international competitions.