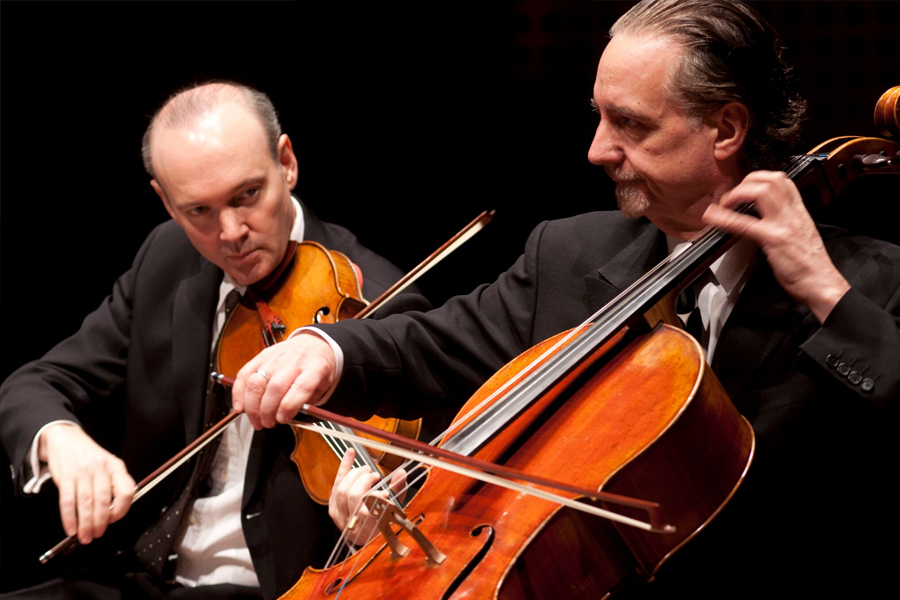 PROGRAMME:
Igor Stravinsky
Italian Suite from the ballet Pulcinella for violin and piano

Engagement made possible by the generous support of Susan Carmel Lehrman

The Chamber Music Society of Lincoln Center (CMS) is known for the extraordinary quality of its performances, its inspired programming, and for setting the benchmark for chamber music worldwide. Whether at its home in Alice Tully Hall at Lincoln Center in New York, on leading stages throughout North America, or at prestigious venues in Europe and Asia, CMS brings together the very best international artists from an ever-expanding roster of more than 150 musicians per season. Many of these superior performances are live streamed on the CMS website, broadcast on radio and television, or made available on CD and DVD.
At the heart of its mission, CMS’ education programs bring chamber music to people from a wide range of backgrounds, ages, and levels of musical knowledge. CMS also fosters and supports the careers of young artists through the CMS Two program, which provides ongoing performance opportunities to highly gifted young instrumentalists and ensembles. As CMS approaches its 50th anniversary season in 2020, its commitment to artistic excellence and to serving the art of chamber music is stronger than ever.
During the festival the CMS musicians will perform three concerts. Their programme includes music by Russian and American composers of the 20th century as well as that by Antonín Dvořák whose life was closely related to the USA.

David Finckel (сello)
Co-Artistic Director of the Chamber Music Society, cellist David Finckel is a recipient of Musical America’s Musician of the Year award, one of the highest music industry honors in the US. He leads a multifaceted career as a concert performer, recording artist, educator, administrator, and cultural entrepreneur that places him in the ranks of today’s most influential classical musicians. He appears extensively with CMS, as recitalist with pianist Wu Han, and in piano trios with violinist Philip Setzer. Along with Wu Han, he is the founder and Artistic Director of Music@Menlo, Silicon Valley’s acclaimed chamber music festival and institute; co-founder and Artistic Director of Chamber Music Today in Korea; and co-founder and Artistic Director of the Chamber Music Workshop at the Aspen Music Festival and School. Under the auspices of CMS, David Finckel and Wu Han also lead the LG Chamber Music School. David Finckel is the co-creator of ArtistLed, classical music’s first musician-directed and Internet-based recording company, whose 19-album catalogue has won widespread critical praise. The latest release features the Dvořák Cello Concerto and a work written for him by Augusta Read Thomas. Piano Quartets, a 2015 Deutsche Grammophon release recorded live at Alice Tully Hall, features David Finckel, Wu Han, violinist Daniel Hope, and violist Paul Neubauer. David Finckel served as cellist of the nine-time Grammy Award-winning Emerson String Quartet for 34 seasons. The first American student of Rostropovich, David Finckel is on the faculty of the Juilliard School and Stony Brook University.

Wu Han (piano)
Co-Artistic Director of the Chamber Music Society, pianist Wu Han is among the most esteemed and influential classical musicians in the world today. She is a recipient of Musical America’s Musician of the Year award, one of the highest music industry honors in the US, and has risen to international prominence through her wide-ranging achievements as a concert performer, recording artist, educator, arts administrator, and cultural entrepreneur. Wu Han appears extensively with CMS; as recitalist with cellist David Finckel; and in piano trios with violinist Philip Setzer. Along with David Finckel, she is the founder and Artistic Director of Music@Menlo, Silicon Valley’s acclaimed chamber music festival and institute; co-founder and Artistic Director of Chamber Music Today in Korea; and co-founder and Artistic Director of the Chamber Music Workshop at the Aspen Music Festival and School. Under the auspices of CMS, David Finckel and Wu Han also lead the LG Chamber Music School in South Korea. Wu Han is the co-creator of ArtistLed, classical music’s first musician-directed and Internet-based recording company, whose 19-album catalogue has won widespread critical praise. Recent recording releases include Wu Han Live and Piano Quartets, a Deutsche Grammophon release recorded live at Alice Tully Hall with cellist David Finckel, violinist Daniel Hope, and violist Paul Neubauer. Wu Han’s most recent concerto performances include appearances with the Aspen Chamber Orchestra, the Atlanta Symphony, and the Philadelphia Orchestra.

Paul Neubauer (viola)
Violist Paul Neubauer's exceptional musicality and effortless playing led the New York Times to call him “a master musician.” He is the newly appointed artistic director of the Mostly Music series in New Jersey. In September he was featured in a Live from Lincoln Center broadcast with CMS. This season he also performs with his trio with soprano Susanna Phillips and pianist Anne-Marie McDermott, and as soloist with orchestras. His recording of the Aaron Kernis viola concerto with the Royal Northern Sinfonia, a work he premiered with the St Paul Chamber, Los Angeles Chamber, and Idyllwild Arts orchestras and the Chautauqua Symphony, will be released on Signum Records. Appointed principal violist of the New York Philharmonic at age 21, he has appeared as soloist with over 100 orchestras including the New York, Los Angeles, and Helsinki philharmonics; National, St Louis, Detroit, Dallas, San Francisco, and Bournemouth symphonies; and Santa Cecilia, English Chamber, and Beethovenhalle orchestras. He has premiered viola concertos by Bartók (revised version), Friedman, Glière, Jacob, Kernis, Lazarof, Müller-Siemens, Ott, Penderecki, Picker, Suter, and Tower and has been featured on CBS' Sunday Morning, A Prairie Home Companion, and in Strad, Strings, and People magazines. A two-time Grammy nominee, he has recorded on numerous labels including Decca, Deutsche Grammophon, RCA Red Seal, and Sony Classical, and in 2016 he released a solo album of music recorded at Music@Menlo. Paul Neubauer is on the faculty of the Juilliard School and Mannes College.

Alexander Sitkovetsky (violin)
Violinist Alexander Sitkovetsky was praised by Gramophone magazine for “his confident, entirely natural musicianship.” He has performed with the Netherlands Philharmonic, the Philharmonia, Royal Philharmonic, Tokyo Symphony, Brussels Philharmonic, the European Union Chamber Orchestra, Academy of St Martin in the Fields, St Petersburg Symphony, Moscow Symphony, Welsh National Opera, and the BBC Concert Orchestra. In the 2014–2015 season he made his debut with the Yomiuri Nippon Symphony Orchestra in Tokyo and with the BBC Scottish Symphony Orchestra in Glasgow, as well as with the Sinfonietta Riga, Poznan Philharmonic, and the Orquesta Filarmónica de Bolivia. He was guest soloist in two nationwide tours of the UK with the Brussels Philharmonic and the St Petersburg Symphony. He toured Australia as guest director with the Australian Chamber Orchestra Collective. He also performed a six-date series of sold-out concerts with the Royal Philharmonic Orchestra at the Royal Albert Hall. Recent performances include his debut with the London Philharmonic Orchestra, the Munich Chamber Orchestra, and the Norwegian Chamber Orchestra as well as a UK tour with the Tonkünstler Orchestra Vienna. His new recording for CPO of Andrzej Panufnik's Violin Concerto has been critically acclaimed and won the 2015 ICMA Special Achievement Award. A former member of Chamber Music Society Two, he was born in Moscow into a family with an established musical tradition and studied at the Menuhin School.

Arnaud Sussmann (violin)
Winner of a 2009 Avery Fisher Career Grant, Arnaud Sussmann has distinguished himself with his unique sound, bravura, and profound musicianship. Minnesota’s Pioneer Press writes, “Sussmann has an old-school sound reminiscent of what you'll hear on vintage recordings by Jascha Heifetz or Fritz Kreisler, a rare combination of sweet and smooth that can hypnotize a listener.” A thrilling young musician capturing the attention of classical critics and audiences around the world, he has appeared on tour in Israel and in concert at Lincoln Center’s Alice Tully Hall, the Dresden Music Festival in Germany, and the Phillips Collection in Washington, DC. He has been presented in recital in Omaha on the Tuesday Musical Club series, New Orleans by the Friends of Music, Tel Aviv at the Museum of Art, and at the Louvre Museum in Paris. He has also given concerts at the OK Mozart, Moritzburg, Caramoor, Music@Menlo, La Jolla SummerFest, Mainly Mozart, Seattle Chamber Music, Bridgehampton, and the Moab Music festivals. Arnaud Sussmann has performed with many of today’s leading artists including Itzhak Perlman, Menahem Pressler, Gary Hoffman, Shmuel Ashkenasi, Wu Han, David Finckel, Jan Vogler, and members of the Emerson String Quartet. A former member of Chamber Music Society Two, he regularly appears with CMS in New York and on tour, including performances at London’s Wigmore Hall.

Orion Weiss (piano)
One of the most sought-after soloists in his generation of young American musicians, the pianist Orion Weiss has performed with the major American orchestras, including the Chicago Symphony, Boston Symphony, Los Angeles Philharmonic, and New York Philharmonic. His deeply felt and exceptionally crafted performances go far beyond his technical mastery and have won him worldwide acclaim. His 2015–2016 season saw him performing with the Iceland Symphony, among others, and in collaborative projects including those with the Pacifica Quartet and with Cho-Liang Lin and the New Orford String Quartet in a performance of the Chausson Concerto. The 2014–2015 season featured his third performance with the Chicago Symphony as well as a North American tour with the world-famous Salzburg Marionette Theater in a performance of Debussy’s La Boîte à Joujoux. In 2015 his recording of Christopher Rouse’s Seeing was released, and in 2012 he released a recital album of Dvořák, Prokofiev, and Bartók. That same year he spearheaded a recording project of the complete Gershwin works for piano and orchestra with his longtime collaborators the Buffalo Philharmonic and JoAnn Falletta. Named the Classical Recording Foundation’s Young Artist of the Year in 2010, Orion Weiss made his debut with the Boston Symphony Orchestra at Tanglewood in 2011 as a last-minute replacement for Leon Fleisher. In 2004, he graduated from The Juilliard School, where he studied with Emanuel Ax.