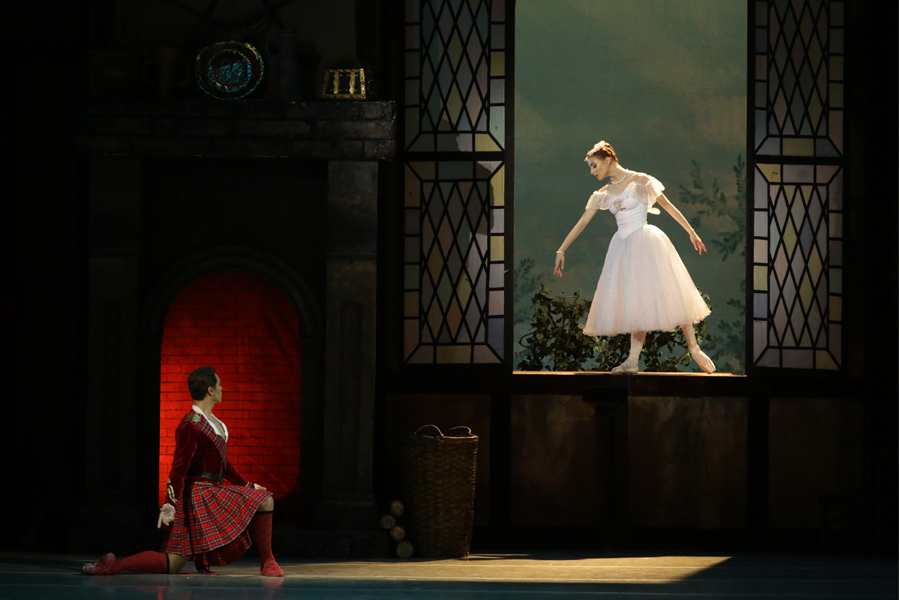 Act I
On the eve of his wedding, James, a young Scotsman, sees a vision of an enchanting, winged Sylph. She is an ethereal spirit of the air who has fallen in love with him. James is captivated by the beautiful Sylph but, as he tries to touch her, she disappears into thin air. A party of guests and friends arrive with Effie, James’ bride-to-be. James is distracted, still haunted by the memory of the Sylph.
Lost in thought, he gazes at the spot where she vanished. In his mind he can still see her and reaches out as though she is still there. It is, however, Old Madge, the village sorceress, whose hideous figure steps out of the shadows instead of the beautiful Sylph. Her revolting appearance and ravaged face cast a shadow over the celebrations. James’ initial fear turns to anger and Effie tries to calm him. Old Madge starts to tell Effie’s fortune. She predicts that Effie will marry not James, but his friend Gurn, a Scottish peasant, who is also in love with her. James loses his temper and sends Old Madge away. The party resumes and, in the general dancing and merrymaking, everyone soon forgets the unpleasant scene. At the height of the party, the Sylph reappears. She beckons to James and they vanish together. Effie is heartbroken.

Act II
Outside a cave in the forest, Old Madge is busy casting evil spells. She traces a magic circle on the ground and places a cauldron in it, which begins to boil. Old Madge begins conjuring things up from the huge cauldron. Other witches hurry to join her and together they conjure up a magic scarf, which is incredibly beautiful but deadly poisonous. The witches depart.
James and the Sylph arrive, very much in love. She shows James her magic kingdom and then flies away. James is left all alone and Old Madge reappears. She asks if he needs any help, and produces the magic scarf. She explains that if he puts the scarf around the Sylph’s shoulders, she will never be able to fly again and will be his forever on earth. James seizes the scarf and goes in search of the Sylph. However, when he finds her and places the scarf on her shoulders, he is horrified to see that it causes her great pain. In front of his stricken gaze, her wings fall to the ground and then in agony she sinks lifeless at his feet. Mourning Sylphs appear and carry their dead friend away, over the treetops and out of sight. The sound of bagpipes and the joyful ringing of bells break the silence in the forest. A bridal procession is glimpsed through the trees: it is a triumphant Gurn leading Effie to the church.


A manifesto of romanticism in ballet, La Sylphide was created in 1832 by the choreographer Filippo Taglioni for his daughter Marie Taglioni, and it was to become one of the most important productions in her life, opening the doors to fame and making her name legendary. It was in this ballet that she first appeared en pointe not to amaze the audience but for the sake of an artistic ideal: barely touching the stage on tiptoe, she created the image of a maiden of the air, calling us away from the earth, from the prose of everyday life. The light and refined Taglioni, literally defying gravity, embodied the world of reverie with her dance. The ethereal quality of her dance was underscored by her costume: the floating gauze tunic created the impression of weightlessness, and the white colour of the open skirts indicated freedom from worldly passions. The dance of the Sylph’s heavenly friends who inhabit the fantastical world around her was totally divested of everyday items. At the same time, the dance characteristics of the people from the real world – Scots peasants dressed in striking national costume – were constructed along the lines of folk dance. The choreographer contrasted the alluring and beautiful world of dreams, so praised by the dance of the sylphs, with the gloomy grotesque of the scene of the coven of evil: around a boiling cauldron there are dancing witches, vampires, goat-footed dwarves, gnomes and genies. From this cauldron the witch Madge extracts a fateful scarf – it has been summoned to break the dream of the romantic hero striving towards a beautiful vision. According to the laws of romanticism, the ideal is unattainable: as soon as the hero, wishing to stop for a moment and catch the elusive, throws the scarf around the Sylph’s shoulders she is dead. Inspired by the success of the first La Sylphide, many choreographers have created their own versions of this romantic ballet. Taglioni’s younger contemporary, the Danish choreographer August Bournonville, staged his own version of La Sylphide in his native land, which included variations on the plot and repeated individual scenes from Taglioni’s masterpiece but which was created using a different score – by Herman von Løvenskiold (whereas Taglioni’s Sylph was danced to music by Jean Schneitzhöeffer). The Danish retained this version, and it was this that provided the basis for the production of La Sylphide at the Mariinsky Theatre. Olga Makarova

Running time: 1 hour 40 minutes
The performance has one interval