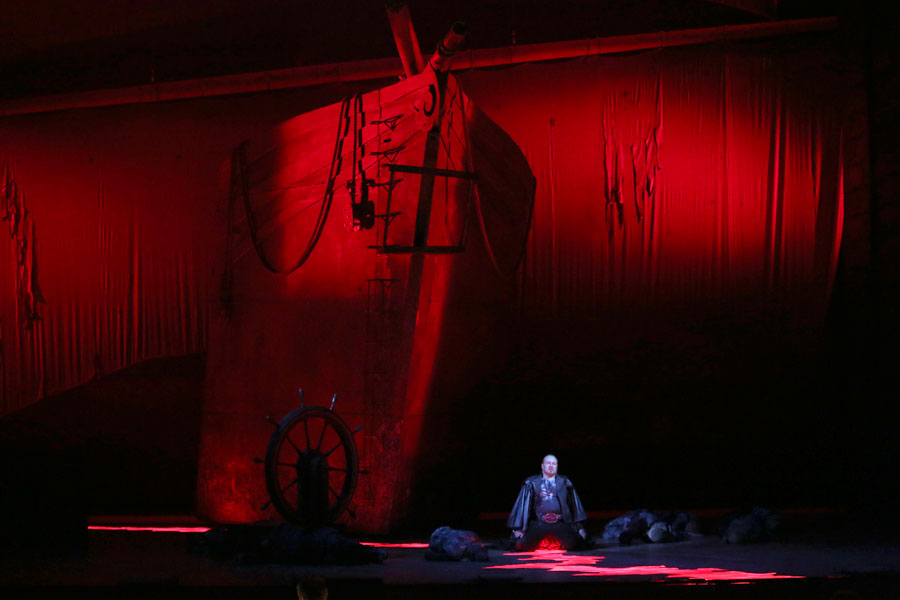 Act I
Driven by a violent storm to take shelter, Daland anchors his ship in the bay of Sandwike, some miles from his home port. Leaving his Steersman on watch, Daland and his crew go to rest. The Steersman, to keep himself awake, sings a ballad. But eventually he falls asleep. A strange ship appears. Its captain, the legendary Flying Dutchman, sings of the curse upon him. Once he swore he would try to round a cape even if it took until eternity; the devil took him at his word: his rate is now to sail unceasingly until the Day of Judgment unless he can find a woman "faithful unto death". Every seven years he may come ashore to search for one, and the time has now come again.
Daland returns to the deck, sees the strange ship and rouses the Steersman. They hail it but are met with silence. Daland meets the Dutchman, who tells him of his wanderings and asks for Daland´s friendship and hospitality. In return he can offer untold riches. When the Dutchman discovers Daland has a daughter he asks to marry her. Daland is delighted. The Dutchman wonders whether this woman will be his saviour. A southerly wind has sprung up and Daland´s crew prepare to set sail, the Dutchman promising to follow.

Act II
Senta´s friends are singing as they spin. Senta takes no part in the work, preferring to gaze at a picture of the Flying Dutchman. Mary reproaches her for idleness and the women mock her for her obsession with the Dutchman, particularly when she has a lover, Erik. Senta asks Mary to sing the ballad of the Dutchman; she refuses, so Senta sings it herself.
The women are moved by the story. Senta declares that she will be the woman to bring salvation to the doomed Dutchman. Everyone is horrified, including Erik, who overheard her. He tells them Daland´s ship is returning. Mary says the picture will be thrown out when Daland comes home.
The women leave to prepare for the sailors´ arrival.
Erik begs Senta to be faithful to him but she is anxious to go and meet her father. Erik wishes she would forget the picture and the ballad. Senta is unmoved by his self-pity; the Dutchman´s sorrow cuts through her. Erik dreamt of a strange ship: Senta´s father and a stranger approached and Erik recognized the stranger as the Dutchman; Senta embraced him and sailed away with him. Senta is now convinced that the Dutchman is seeking her and it is her fate to save him. Erik leaves in despair.
Daland arrives with the Dutchman. He is puzzled that his daughter has not greeted him in the usual way. She is transfixed by the visitor. Daland asks her to offer him hospitality and urges her to marry him. He leaves the two alone, commending their respective virtues.
The Dutchman and Senta are entranced, each contemplating the fulfilment of their dreams. Senta, overwhelmed by his suffering, saying she will be his salvation.
The Dutchman warns her of the sacrifices she must make if she is to be one to him for ever. But she says she will be true until death.
Daland returns. He is overjoyed that there is now an engagement to celebrate.

Act III
The sailors are having a party. The women arrive with food and drink and take some to the stranger´s ship. But there is no response to their calls. The sailors continue their festivities. Suddenly the Dutchman´s crew come to life. The Norwegians flee in terror. Senta appears with Erik, who is broken-hearted and reproachful. He pleads with her to remember her promises to him. The Dutchman is listening, and believes Senta unfaithful to him. He will return to the sea, never return to land, and forego his salvation. Senta begs him to stay but Erik wants her to let the Dutchman go. He tells her he will not let her fall victim to his curse, as have countless women in the раst: all have sworn fidelity to him and broken their oaths; eternal damnation is their reward.
Senta will be saved for she has not sworn fidelity to him before God. She maintains she has always known both his identity and destiny. Erik calls for help. The Dutchman reveals his identity, boards his ship end leaves. In есstasy Senta calls out to him and throws herself in to the sea The ship founders.
The Dutchman is set free.

Running time: 2 hours 30 minutes
The performance without an interval