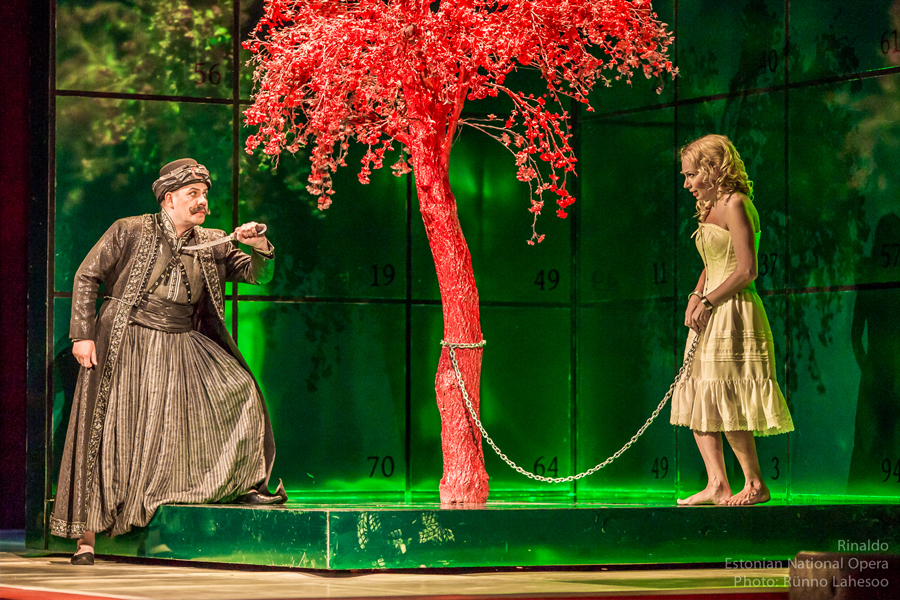 Act I
Jerusalem, which is under the rule of the Saracen King Argante, is besieged by the Crussader army led by Goffredo of Bouillon. Almerina, Goffredo's daughter, and the daring knight Rinaldo are engaged to be married. Argante awaits assistance from the Queen of Damascus, the sorceress Armida, and she abducts Almerina in order to distract Rinaldo from involvement in the siege of Jerusalem.

Act II
Goffredo and Rinaldo set out to find Almerina, with whom Argante is in love. Armida is captivated by Rinaldo, buth the knight spurns her. Goffredo and the knight Eustazio attempt to gain access to the queen's enchanted castle, the entrance to which is guarded by fire-breathing dragons.

Act III
Armida, who has tried in vain to tempt Rinaldo, is now intent on killing Almerina. Rinaldo saves his beloved's life. Goffredo and Eustazio arrive and with the assistance of a good magician lay waste to Armida's garden. There ensues a decisive battle between Goffredo's forces and the army of Argante who is aided by Armida's spells. Goffredo is victorious – nothing will interfere with Almerina and Rinaldo's marriage, and Argante and Armida who have been taken prisoner are graciously released and embrace Christianity.

When I first saw Rinaldo, nothing had prepared me for the delight which I felt while watching this masterpiece. It was Handel’s first opera written for London, not only that, it was the first opera in the Italian language to be written for the London stage. The premiere of Rinaldo, loosely based on Tasso’s epic poem Gerusalemme liberate (Jerusalem delivered), took place at the Queen’s Theatre in the Haymarket in early 1711 and was a huge hit. Gorgeous arias, a fabulous, extravagant plot, dramatic characters, all that one could wish for, were present. Conquest, magic, deception, thwarted love, betrayal, sex, violence, abduction, a heroic quest, battles; it seemed as if Handel had thrown every single theatrical device in the book at it.
Rinaldo went on to be the most performed of Handel’s operas during his lifetime. The opera was so successful that it was given in a fairly extensively revised version in 1731, however we are basing our performing edition on the original 1711 score. And what of the music? Even for Handel this opera has a large number of “hit” arias that leaves one gasping. And then there is of course the incomparable “Lascia ch’io pianga” sung by Almirena in the middle of Act 2. One of Handel’s most beautiful and celebrated arias. A treat indeed!
William Relton