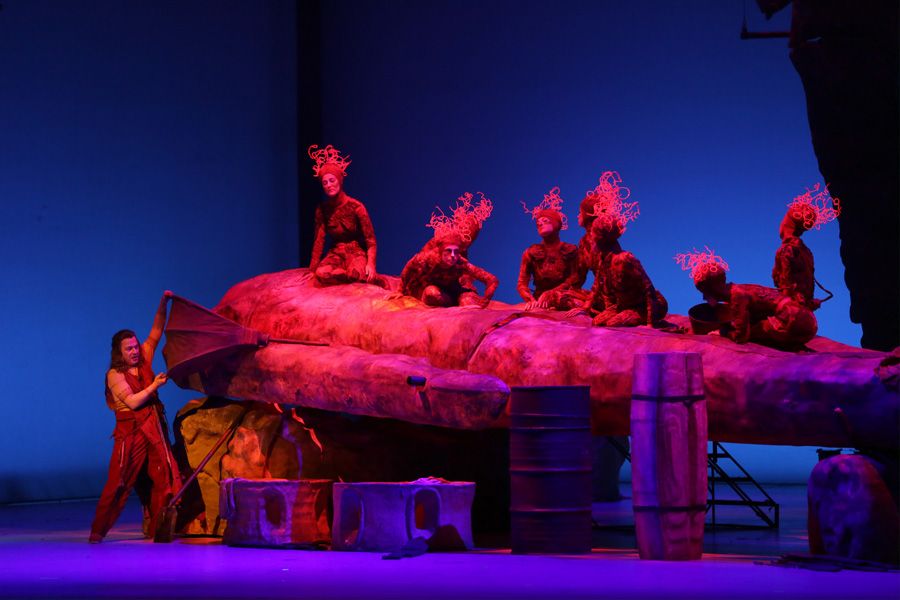 opera by Richard Wagner, third part of the tetralogy Der Ring des Nibelungen
Performed in German (the performance will have synchronised English and Russian supertitles)
In memory of Richard Trimborn

Act I
Until recently, the universe shook from the fighting between the gods, giants and Nibelungs in the struggle for the Rhine’s fateful legacy. Now that the storms and disquiet have passed, the earth has become still; everything is peaceful, awaiting the coming of great new events…The dwarf Nibelung gnome Mime, a blacksmith, lives in a cave deep in a dense forest with Siegfried, his pupil. The blacksmith is unable to make sword that does not break into pieces as soon as Siegfried tries it out. Mime calls Siegfried his son, but Siegfried does not believe him, and hates his cowardly, ever-complaining teacher. Reluctantly, Mime tells Siegfried the secret of his birth: one day he found a woman in the woods, exhausted – it was Sieglinde. She herself died giving birth to her son. Before her death, Sieglinde named her son and bequeathed him the splintered fragments of the sword Nothung, which belonged to her murdered husband. To this day, Mime has kept the remains of the sword. Siegfried insists that the Nibelung weld Nothung whole for him immediately. But Mime knows that such a task is beyond him.
A Wanderer appears – it is Wotan himself. He asks Mime for shelter, but is driven out. The Wanderer proposes a wager: whoever can answer three questions wins; the other will forfeit his head. Mime thinks up difficult questions – about Nibelungs, giants and the gods. The Wanderer is able to answer these questions with ease before posing his own three questions. He asks about the race to which Wotan brought woe.
“The race of the Wälsungs,” answers Mime. “Sieglinde and Siegmund, Wotan’s children, loved one another. They had a son, Siegfried – the strongest of the strong.” The second question comes: “Siegfried was raised by a dwarf in order to gain treasure. What sword can complete this feat?” “Nothung,” replies Mime, “Wotan himself plunged that sword into a tree trunk. Siegfried alone can draw it out, but Wotan has smashed his sword.” Wotan asks his last question: “Who will be the one to weld the sword together again?” Mime does not know what to reply. Wotan then answers the question himself: only he who knows no fear can forge the sword. The Wanderer disappears with these words.
Struck with terror, Mime recollects that he has forgotten to teach Siegfried fear, so Mime’s life belongs to the youth. The Nibelung attempts to inculcate fear in Siegfried and tells him that as his mother lay dying, she asked Mime not to send her son forth into the world until he has known the meaning of fear. Siegfried agrees to discover this new emotion. But none of Mime’s stories make the slightest impression on him. Mime promises to take Siegfried to the dragon’s cave. But Siegfried needs the sword and he repairs Nothung himself from the broken shards. Mime then decides to kill Siegfried after his battle with the dragon and seize the treasure.

Act II
That night, in a thicket in the forest by the entrance to the cave, Alberich meets the Wanderer. The hoard of gold and the Ring that will give unlimited power over the world lie inside the cave. Wotan, the supreme god, had cheated Alberich of the treasure and gave it to the giants in exchange for their building the impregnable fortress of Valhalla. Fafner, one of the giants, killed his brother, transformed himself into a dragon and now guards the treasure in the cave. The Nibelung is powerless before the dragon and Wotan must observe the agreements they made. If Alberich ever has the Ring again, he will destroy Valhalla and make the world bend at his knee. “Mime himself has the same dream,” Wotan warns Alberich. The worried Alberich foretells the death of the gods.
Mime brings Siegfried to the dragon’s cave – here the hero will discover the meaning of fear. Tired by the long journey, Siegfried lies down to sleep. He dreams of his father and mother. The forest stirs, the birds begin to sing, and Siegfried calls back to them with his silver horn. Woken by the noise, the dragon creeps out of cave. Siegfried is not afraid of the monster and slays it. Before he dies, Fafner warns his victor: whoever put him up to this deed wishes to kill him. A drop of the dragon’s hot blood falls on Siegfried’s arm. He automatically licks the blood and is instantly able to comprehend what the birds are saying. They tell him secret power of the Ring and the helmet hidden in the cave. Of all the treasures that lie there, Siegfried must take only these two things. Siegfried hides in the cave.
Mime and Alberich appear. They are arguing over who now owns the treasure. The perfidious Mime intends to dispose of Siegfried, but now Siegfried can read the secret thoughts of men and he kills Mime. Alberich hides in the thicket.
The Woodbird tells Siegfried that the beautiful Brünnhilde lies asleep on a high mountain surrounded by flames. Only he who knows no fear will be able to pass through the fire. Brünnhilde will be Siegfried’s and the Woodbird will show him the way to her.

Act III
One stormy, thunderous night, Wotan calls Erda, Goddess of Fate, from the depths of the earth in order to know what the future holds. When she bore Wotan’s child Brünnhilde, however, she lost her prophetic gift: Mother Earth’s material wisdom passed to her daughter. However, Brünnhilde is unable to answer Wotan either, since he renounced his daughter when she opposed his will. And now the supreme god must freely surrender his rule over the world: a young hero is coming, fearless and free from the power of the gods. With the Ring of the Nibelung, the value of which he does not know, he will free the earth from the curse of the gold.
Day breaks. The storm has passed. Siegfried appears in the distance. Wotan tries to prevent the young hero from passing, blocking his path with his spear – the very spear that once shattered Nothung. This time, however, it is the spear which shatters into pieces. Wotan disappears.
The fiery wall parts before Siegfried and, at the top of crag, he sees a sleeping warrior clad in his armour. Siegfried removes the helmet and rips apart the armour with his sword – a beautiful girl lies before him. He is seized by an unknown feeling – could it be fear? He kisses her. The spell is broken and Brünnhilde awakes to new life and worldly love.