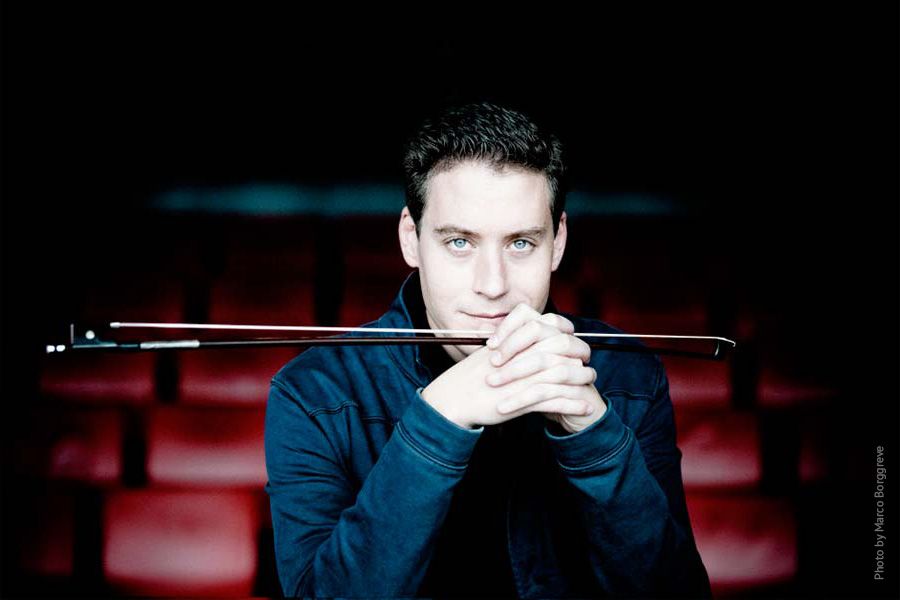 Ludwig van Beethoven completed his Violin Sonata Op. 30 No 3 in the summer of 1802 in Heiligenstadt, and it was published one year later with a dedication to Emperor Alexander I of Russia. Beethoven subsequently composed his Piano Sonata No 16 (Op. 31, No 1), also in G Major. They have much in common, particularly in the first movements: the dynamism, the abundance of passages, the stormy development and the incessant sequence of musical events. In the second movement the relationship between the instruments changes.
In the energetic passages of the first movement they frequently come together, whereas here they alternately accompany one another, and often the violin tactfully has to cede its “pole position”. It was not by chance that the cover of the first edition of the sonatas, Op. 30, published by the Vienna Bureau of Arts and Industry, read “Sonatas for Piano Accompanied by Violin”. The finale is written in Beethoven’s beloved genre of contredanse. It is one of Beethoven’s most simple and energetic rondos – without any composition “gimmicks” albeit with humoristic details. While the pianist’s right hand competes with the violin in terms of speed, the left hand returns to a measured “drum bass” on just one note. Many pianists disguise this “primitive” element of the finale, though Beethoven actually wanted this to be emphasised, particularly on the final page of the score.

The Violin Sonata in D Major is an arrangement by the composer himself of his own Flute and Piano Sonata, Op. 94. It was begun by Prokofiev in Alma-Ata in 1942 and completed one year later in Perm at the same time he was working on the ballet Cinderella. Prokofiev composed a very light and dreamy work for the flute, with endlessly upward-striving passages. The scherzo is reminiscent of a fast and impetuously whirlwind-like waltz, while in the third movement there are unexpected blues notes.
The sonata had a surprisingly happy destiny; in December 1943 it was premiered in Moscow by flautist Nikolai Kharkovsky and pianist Sviatoslav Richter, and in June 1944 David Oistrakh and Lev Oborin performed a version for two violins and piano (Op. 94 bis). Prior to that, Prokofiev and Oistrakh had converted the flute part into one for the violin, introducing a more free change of registers, dual notes and chords. The sonata was named the Second despite the fact that Prokofiev was then still working on the First Violin Sonata, which is completely different in terms of its character.
Anna Bulycheva

Johannes Brahms’ Sonata for Violin and Piano No 1 in G Major (Op. 78) was written while under the impression of the death of Felix Schumann, son of the composer Robert Schumann to whose family Brahms had been bound by the bonds of friendship for many years. The Sonata’s autobiographical tendency is highlighted by the induction of themes from Brahms’ songs, written to words by Felix Schumann and Klaus Groth – a poet whose verse best suited the composer’s view of the world. The essence of the idea of the work is the collision of young life and death. The content of the songs defines the work’s “programme”: Brahms quotes motifs from the cycle Songs of Youth; the theme of Rain Song, linked with recollections of a forever-gone childhood of the drops of rain lashing provocatively at the window – in the song Echo these drops are likened to tears… The “tearful” symbolism harmonises with the movement of a funeral procession in the first section, contrasted with the state of enlightened peace in the second. The theme of the second section also appears in the conclusion of the unusual – for a sonata in major key – finale, which brings reconciliation. Nadezhda Kulygina

The concert rhapsody Tzigane was written for the Hungarian violinist Jelly D’Aranyi, whom the composer had heard playing in London in 1922. At the concert he attended, Ravel heard D’Aranyi perform a violin sonata by Bartók. Later the composer wrote to Bartók: “you have inspired me to compose a small piece that is fiendish in its complexity, summoning me to the Hungary of my dreams. As it is to be a piece for violin, why should I not call it Tzigane?” Initially, the rhapsody was composed for violin and piano, though in July 1924 Ravel produced an arrangement for violin and symphony orchestra. The music of the rhapsody is intense in intonations of gypsy and Hungarian folklore. Knowing Ravel’s love for stylisations, one might conclude that this is a parody of the “gypsy” music by Liszt and Joachim (interestingly, D’Aranyi was the great niece of the renowned Hungarian violinist). The piece has two movements – a slow introduction which opens with a lengthy cadenza of the violin and the fast virtuoso passage which is abundant in double notes, pizzicato and glissando.
Yekaterina Yusupova