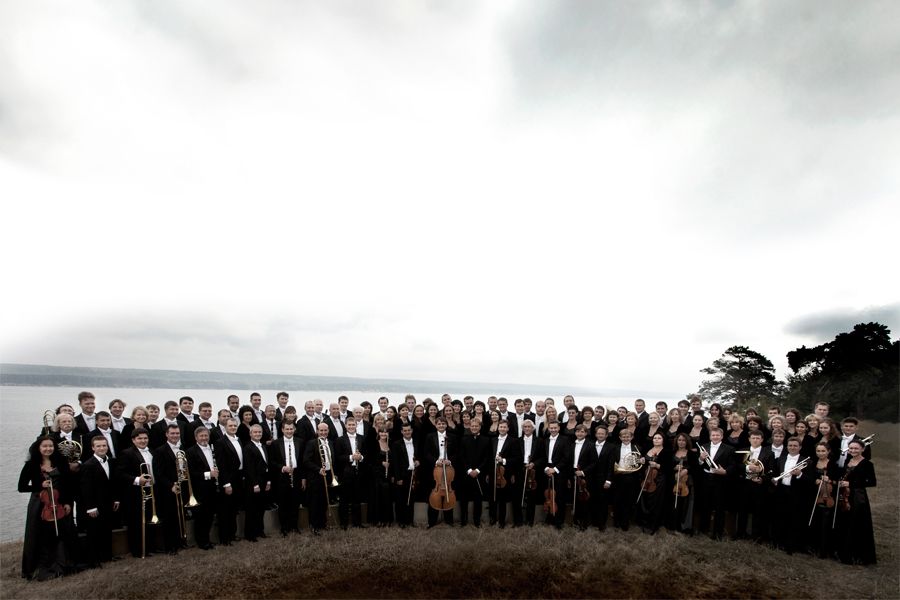 The State Symphony Orchestra of the Republic of Tatarstan

Mahler’s First Symphony was written between 1884-88. It is noteworthy that not long before this Mahler had written his vocal cycle Lieder eines fahrenden Gesellen. It is autobiographical – Mahler was, as we know, a “travelling” musician in whom people immediately recognised not an apprentice but a master. His First Symphony is equally autobiographical, and in it Mahler broke the themes of the vocal cycle. It would be pointless to think that the name Titan, which Mahler gave it at the first performance, reflects its programme content. The composer used the title of his favourite book by Jean Paul purely to share with the romantic writer his enthusiastic pantheism, his love of nature and, at the same time, his inherent and scathing irony and his torturous search for his own “self”.
The first movement, grandiose in terms of scale, “draws the dawn awakening of nature, emerging from silence, from the early morning frozen sounds: birdsong, the fanfares of a hunting horn, calls that blend together in an indistinct, growing rumble…” (Inna Barsova). The second movement – a Scherzo – is a full-blooded life-affirming version of a folk dance, muscular and rough in the outer sections and gracious in the middle. The third movement – Funeral March in the Manner of Callot – is a grotesque musical interpretation of the famous engraving Die Beerdigung des Jägers by the artist Moritz von Schwindt. The funeral procession of animals burying the hunter is a token of the hypocrisy lies and poorly disguised sanctimony that reign in life.
The finale forms the dramatic heart of the symphony. The titanic struggle concludes with a magnificent confirmation of the theme of nature from the first movement. This is both a symbol of the integrity of mankind, renewed and revived together with nature, and a brilliant detail of the composition that relates the architectural perfection of the composition of the symphony as a whole.
Iosif Raiskin

The idea of founding a symphony orchestra in Tatarstan came from Nazib Zhiganov, Chairman of the Union of Composers of Tatarstan and rector of the Kazan State Conservatoire. On his initiative, the conductor Natan Rakhlin was invited to Kazan to form an orchestra.
On 10 April 1967 at the Tatar Opera and Ballet Theatre the Symphony Orchestra of the State Tukai Philharmonic of the Tatar Autonomous Soviet Socialist Republic gave its first performance under the baton of Natan Rakhlin. The first thirteen years proved to be some of the most exciting in the orchestra’s history: the ensemble undertook successful tours to Moscow as well as other major towns and cities in the USSR, while in Tatarstan its popularity knew no limits.
Starting in 1979, after Natan Rakhlin’s death Renat Salavatov, Sergei Kalagin, Ravil Martynov and Imant Kotsinsh all worked with the orchestra. In 1985 Fuat Mansurov was invited to take the post of the orchestra’s Artistic Director and Principal Conductor, and went on to work with the orchestra for twenty-five years. In 2010, following Fuat Mansurov’s death, Alexander Sladkovsky became the orchestra’s new Artistic Director and Principal Conductor. With his appointment the ensemble embarked on a new stage of its history.
International music festivals organised by the State Symphony Orchestra of the Republic of Tatarstan – Rakhlin Seasons, White Lilac, Kazan Autumn, Concordia, Denis Matsuev and Friends and Creative Discovery – are all vivid events in the nation’s cultural life. The orchestra runs the project The Property of the Republic for talented pupils at music schools and students of the conservatoire, the educational project Music Lessons with an Orchestra for Kazan school pupils and the project Healing through Music for severely ill children. The ensemble has been a winner of the competition Philanthropist of the Year (2011 and 2013), founded by the President of Tatarstan.
The State Symphony Orchestra of the Republic of Tatarstan is one of the finest ensembles in Russia. The ensemble has appeared in concerts to great acclaim in Moscow, Perm, Orenburg, Irkutsk, Sochi and Tyumen and at the  Crescendo, Stars on Baikal, Denis Matsuev’s Orenburg Seasons, The Cherry Orchard and Hibla Gerzmava Invites festivals among others. In April 2014 the orchestra took part in a concert at UNESCO headquarters in Paris at a ceremony where Denis Matsuev was made a Goodwill Ambassador. In 2015 the orchestra performed at the Concert Hall of the Mariinsky Theatre.
In 2012 the orchestra recorded an anthology of music by Tatar composers and the album Brightening up on the Sony Music and RCA Red Seal labels. Since 2013 the State Symphony Orchestra of the Republic of Tatarstan has been an artist of Sony Music Entertainment Russia. The orchestra’s concerts have been recorded and broadcast by the TV companies Mezzo and Medici.tv.
Over the years the orchestra has collaborated with countless internationally acclaimed performers, among them Galina Vishnevskaya, Irina Arkhipova, Olga Borodina, Lyubov Kazarnovskaya, Hibla Gerzmava, Sumi Jo, Simone Kermes, Albina Shagimuratova, Tatiana Serjan, Anna Bonitatibus, Dinara Alieva, Plácido Domingo, Roberto Alagna, Zurab Sotkilava, Dmitri Hvorostovsky, Vasily Gerello, Ildar Abdrazakov, Vladimir Spivakov, Viktor Tretyakov, Igor Oistrakh, Vadim Repin, Sergei Krylov, Gidon Kremer, Alena Baeva, Yuri Bashmet, Mstislav Rostropovich, Daniil Shafran, David Geringas, Sergei Roldugin, Mikhail Pletnev, Nikolai Petrov, Vladimir Krainev, Vladimir Viardo, Lazar Berman, Denis Matsuev, Boris Berezovsky Barry Douglas, Nikolai Lugansky, Alexander Toradze, Ekaterina Mechetina, Ramzi Yassa, Ksenia Bashmet, Igor Butman, Sergei Nakariakov and Alexei Ogrintchouk.
The ensemble has also collaborated with the Yurlov Russian State Academic Choir, the State Russian Sveshnikov Chorus, the Masters of Choral Singing chorus directed by Lev Kontorovich, the Chorus of the St Petersburg State Capella and the Vladimir Minin Moscow Chamber Chorus.