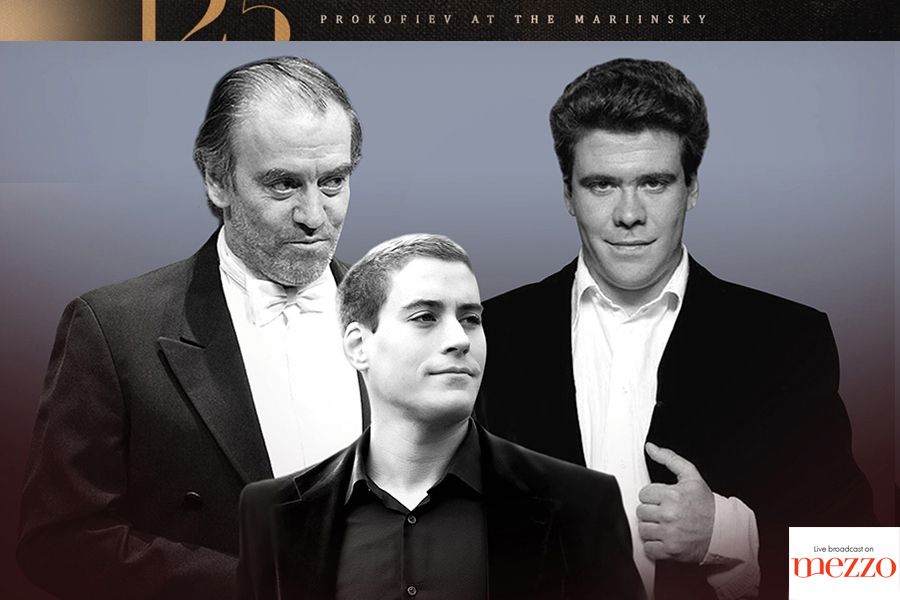 Live broadcast on mezzo.tv
Marking 125 years since the birth of Sergei Prokofiev

Cantata for the 20th Anniversary of the October Revolution, Op. 74

Sergei Prokofiev’s Third Symphony is connected with his opera The Fiery Angel after the eponymous novel by Valery Bryusov. The opera was completed in 1927 and was never performed on the stage during the composer’s lifetime. In 1928 Prokofiev reworked the music of the opera, transforming it into a symphony. Such cases had already occurred with Prokofiev’s music, though previously he composed suites based on theatre music without making any significant changes. Here, however, the themes of the opera were to be developed in a fully symphonic manner.
The gloomy mysticism that reigns throughout the opera casts its shadow on the symphony too. The work opens with a frenzied and challenging theme that later comes back in the culminations of the third and fourth movements. The principal and secondary themes of the first movement are linked with images of the spirit-possessed Renata and Sir Ruprecht. The chorale of the strings at the start of the second movement refers to the final act of the opera in which Renata seeks peace and retreats to a convent. The music of the scherzo has an infernal quality; the tremendously evil sound is created by timbre effects of the string section which is divided into thirteen voices. The grandiose finale combines a whirlwind-like movement of sound massifs with rhythms of a funeral procession and the mystical “sound of silence” in the middle movement.

The Cantata for the 20th Anniversary of the October Revolution was Sergei Prokofiev’s first experience of a “commission composition” following his return to the USSR from abroad. The concept for the cantata apparently came to the composer some years earlier and changed somewhat during the working process. Prokofiev’s initial idea was a cantata about Lenin using the dictator’s speeches. The final version was also to include extracts from works by Marx and speeches by Stalin.
The task commissioned by All-Union Radio – to compose a cantata marking the anniversary of the Revolution – was resolved by Prokofiev innovatively and with wit, without changing his style as a composer and creating, as Levon Hakobian said, “the most outstanding of musical works <...> in the glory of communist ideology”. But the fate of this music was to prove difficult: neither was it performed on the anniversary date nor during the composer’s lifetime at all. The cantata was too complex for common perception and did not fit in with the canons of the art of socialist realism, and moreover the idea of composing music on themes of Marxism-Leninism in the late 1930s seemed inappropriate. The first performance of the cantata only took place in 1966 (moreover the three movements linked to texts by Stalin were edited), and it was only in 1984 that it was performed in full.
The cantata has a huge cast (narrator, two choruses, symphony orchestra with expanded wind and percussion sections, brass band and accordion orchestra). The vast ten-part composition opens with an orchestral introduction with the epigraph from The Communist Manifesto (“A spectre is haunting Europe – the spectre of communism.”). The consequent choral fragments (Philosophers and Marching in Close Ranks), interspersed with instrumental episodes, lead to the cycle’s finale – the sixth and seventh movements (Revolution and Victory) which are the longest and involve all performers. The three final movements were included in the cantata at the final stages of the work: these are The Pledge to the text of Stalin’s speech next to Lenin’s coffin, the instrumental Symphony symbolising animated socialist construction (in this movement there is a curious feature of orchestration with the inclusion of an ensemble of accordions) and the apotheosis-finale The Constitution – extracts from Stalin’s speech on the occasion of the passing of the 1936 Soviet constitution.
Vladimir Khavrov

Sergei Prokofiev wrote his Second Violin Concerto for the French violinist Robert Soetens, who lived to the age of one hundred years, during eighty-eight of which he performed as a concert musician. In his Autobiography, Prokofiev recalled that “The concerto was composed in very different countries, thus reflecting my own nomadic life as a concert musician: the main part of the first movement was written in Paris, the first theme of the second movement in Voronezh and the instrumentation completed in Baku, the first performance taking place in December 1935 in Madrid.” Together, the composer and the violinist visited a great many countries, among them Portugal, Morocco, Algeria and Tunisia. Prokofiev’s nomadic life had no effect on the integrity of the musical composition. The concerto was composed in the neoclassical style, then new for Prokofiev, with clearly expressed intentions for simplicity and clarity. The orchestration is transparent – ascetic, even: the first movement opens with the melody of the violin to no accompaniment whatsoever. The romantic second movement is reminiscent of Prokofiev’s magical ballet adagios. The virtuoso finale stands apart for its energy and humour: in the coda, the violin solo is accompanied by… double basses and a bass drum. At the end of this movement, Prokofiev introduced the castanets – in all probability in contemplation of the impending premiere in Madrid.
Anna Bulycheva

Piano Concerto No 2 was one of Sergei Prokofiev’s favourite works. The composer first performed it at the end of the summer season in 1913 in Pavlovsk (when it was conducted by Alexander Aslanov). The premiere was accompanied by a “glorious” scandal: Prokofiev was labelled as both a cubist and a futurist. And he immediately composed a “cubist-futurist” and incredibly complex piano concerto as his calling card: he performed it in London for Diaghilev when they first met, and he selected it for his official debut abroad in Rome in 1915. When Prokofiev emigrated, the score remained in Russia (and has never been found to this day). In 1923 the composer revived it and soon had the concerto published. Today it is hard to understand what could have scared away audiences in the bewitching first section. Could it be the massive cadenza of the soloist that slowly approaches its culmination, so complex that it is written over three lines (as if for three hands)? The second section, a scherzo, is one of the finest pieces in the “perpetuum mobile” genre. The piano part does not have one single pause! The start of the third section, an intermezzo, deserves the title of “futurist,” although the soloist performs a refined and fantastical theme. And the stormy, unbridled start of the finale is wisely balanced by the gentle middle section in the character of a nursery rhyme.
Anna Bulycheva