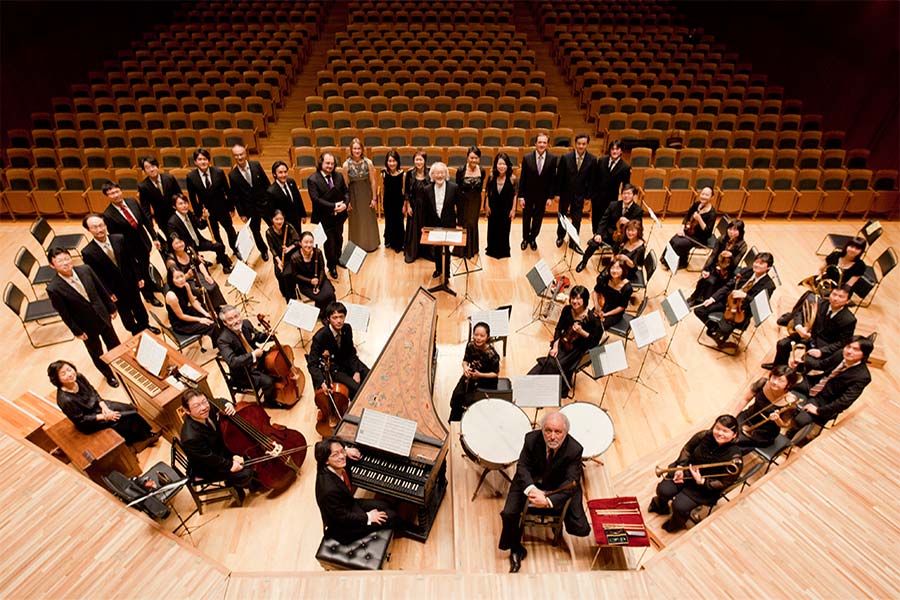 In memory of Yoko Nagae Ceschina


Countess Ceschina died in January 2015. She was not just a friend and partner of the Mariinsky Theatre – she was a true admirer of Russian culture. Thanks to her inestimable support, countless numbers of music lovers throughout the world including in Japan and the USA were able to discover and fall in love with the works of Russian composers. As a professional harpist herself, she thought of the Mariinsky Orchestra as her “home” ensemble – as part of her family. Some of the merit for the acoustically perfect Concert Hall of the Mariinsky Theatre belongs to Countess Yoko Nagae Ceschina. Numerous audio and video production projects of the Mariinsky recording label were also made possible thanks to her generous support.

The Bach Collegium Japan is an ensemble consisting of performers of original instruments and a choir formed in 1990 by Masaaki Suzuki, an internationally renowned and highly-respected Bach performer, organist, harpsichordist, conductor and musicologist.
The Bach Collegium Japan performs frequently in Japan and overseas with the aim of presenting ideal interpretations of baroque music focussing on the religious works of Johann Sebastian Bach. In 1995 the ensemble embarked on a project aimed at recording Bach’s complete church cantatas in chronological order. This project was eventually completed in February 2013 and has met with lavish praise in Japan and overseas as an internationally outstanding and exceptional achievement of the first order.
In 2010, Suzuki and his ensemble were awarded both a Preis der Deutschen Schallplattenkritik and a Diapason d’Or de l’Année for their recording of Bach’s motets, which was also honoured in 2011 with a BBC Music Magazine award.
The Bach Collegium Japan and Masaaki Suzuki were awarded the 45th Suntory Music Prize and Echo Klassik music prize in 2014. This was also the year when they performed for the first time as far afield as New Zealand and Mexico.
Recent engagements include concerts at Amsterdam’s Concertgebouw, Brussels’ Palais des Beaux-Arts, Paris’ Salle Pleyel and the Matthäus-Passion at the Thomaskirche in Leipzig where Suzuki was presented with the 2012 Leipzig Bach Prize, as well as performances at the Festival Oude Muziek Utrecht and the Bremen Musikfest.

Since founding the Bach Collegium Japan in 1990, Masaaki Suzuki has established himself as a leading authority on the works of Bach. He has remained their Music Director ever since, taking them regularly to major venues and festivals in Europe and the USA.
In addition to working with renowned period ensembles, such as the Collegium Vocale Gent and the Philharmonia Baroque, he has been invited to conduct modern instrument orchestras with repertoire as diverse as Britten, Fauré, Haydn, Mahler, Mendelssohn, Mozart and Stravinsky.
Recent engagements include debut appearances with the Deutsches Symphonie Orchester Berlin, the Melbourne Symphony, the Rotterdam Philharmonic, the St. Paul Chamber Orchestra, the New York Philharmonic and the Radio-Sinfonieorchester Stuttgart as well as return visits to The Netherlands Radio Chamber Philharmonic Orchestra, the Orchestre de Chambre de Paris and the Verbier Festival.
Suzuki’s extensive discography on the BIS label features Bach’s complete works for harpsichord and his interpretations of Bach’s major choral works and sacred cantatas with the Bach Collegium Japan.
Masaaki Suzuki combines his conducting career with his work as an organist and harpsichordist. Born in Kobe, he graduated from the Tokyo University of Fine Arts and Music with a degree in composition and organ performance and went on to study harpsichord and organ at the Sweelinck Conservatorium in Amsterdam under Ton Koopman and Piet Kee. Founder and head of the early music department at the Tokyo University of the Arts, he is currently Visiting Professor of Choral Conducting at the Yale School of Music and the Yale Institute of Sacred Music and the conductor of the Yale Schola Cantorum.
His awards include the Order for Services to the Federal Republic of Germany (2001), the Preis der Deutschen Schallplattenkritik, the Diapason d’Or prize for his recording of Bach’s motets (2010), the BBC Music Magazine award and the Prize of the Bremen Musikfest (2011) in addition to the Johann Sebastian Bach Medal of the city of Leipzig (2012).