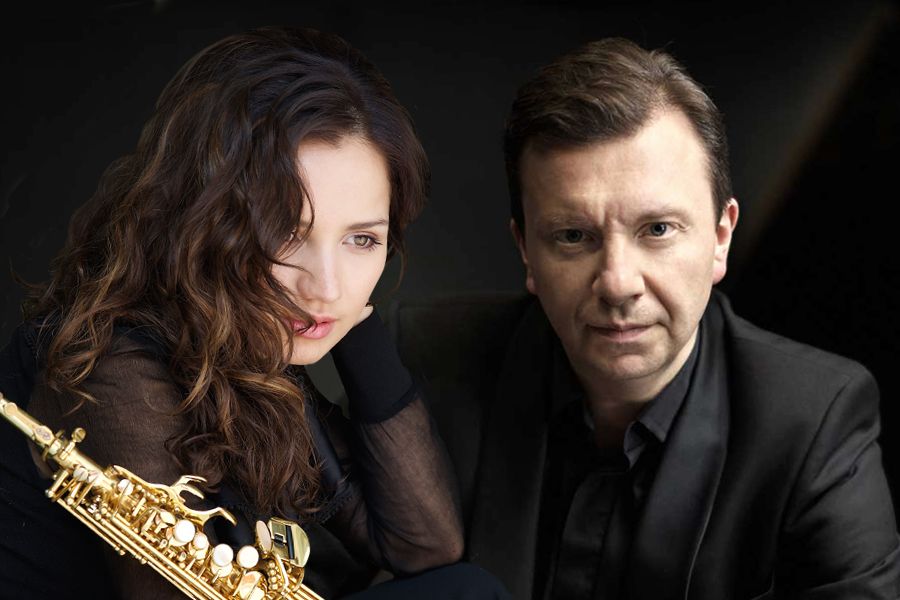 Luciano Berio (1925 – 2003) was an Italian composer who came up with many innovative concepts in contemporary music. Working with the human voice and its capabilities – hitherto unused by composers – as well as the discovery of polystylistics which influenced the endeavours of many composers in the 1970s – all of this ensured Berio a place among the leading composers of the latter half of the last century. In many of his works he rediscovered the expressive capabilities of various instruments. One result of his experiments in this field was the immense cycle of virtuoso solo études Sequenzas, which was composed taking into account almost every instrument in the orchestra. Berio composed this cycle starting in the late 50s and worked on it until his death.
Anna Bulycheva

César Franck’s Violin Sonata forms part of the triad of chamber ensembles produced by the composer in the last decade of his life along with a piano quintet and string quartet. All three works are acclaimed as dazzling examples of French chamber music.
Franck dedicated the score as a wedding present to its first performer Eugène Ysaÿe, a famous Belgian violinist. Franck’s sonata was not just one of Ysaÿe’s favourite works, performed until the end of his career, but also entered the repertoires of numerous celebrated violinists.
The four-part form of the cycle, which begins with a measured slow movement, brings to mind the structure of Bach’s sonatas. Turning to recitative (in the third movement) and polyphonic forms (the main theme of the finale is a canon) also makes us think of the principles of the Baroque era, though – of course – this sonata belongs to the late-Romantic style, by no means least because of the rich chromatic harmonies. The first musical idea of the sonata is in the colourful Major-key ninth chord, the sound of which Franck literally is in love with, not hastening to settle it in a steady assonance – he creates a link with Debussy’s yet-to-be-written searches in harmony.
In the sonata we have a vivid example of the principle of “cyclical themes” by which the cycle is linked by one motif that appears in every movement. Franck also made use of this principle in his symphony music. Here this element is provided by the intonation of the rising tercet that appears at the very start of the first part of the piano and then with the violin. The violin, which stands apart throughout the sonata, was later transposed for various instruments including the flute.
The arrangement for cello produced by French cellist Jules Delsart was approved by Franck himself. The natural sound of the sonata when performed on the cello allows us to see it as an equal partner to the original.
Vladimir Khavrov

In the last year of his life Camille Saint-Saëns continued to compose actively. In addition to vocal and piano works he wrote three sonatas for wind instruments – the oboe, clarinet and bassoon. “I am using my last breath of energy in order to expand the repertoires of these instruments which are often sadly ignored,” the composer wrote to one of his friends.
Work on the sonatas began in Algeria in early 1921 and was completed in April in Paris. The Sonata for Oboe and Piano Op. 166 is the first and shortest of the three. The work is dedicated to the composer’s friend Louis Bas, who was the first performer.
The sonata has three movements, but the sequence of the tempi is not classical. Instead of fast outer sections and a slow middle one, Saint-Saëns uses a gradual growth of the movement’s speed. The sonata opens with a refined pastorale Andantino, the recitative Ad libitum leading to the second movement Allegretto, written in the rhythm of a gig. The energy of the final Molto allegro is reminiscent of the composer’s early works.
The sonata can also be performed in an arrangement for saxophone and piano.

Erwin Schulhoff was a Jewish-Czech composer. His creative life is a unique stylistic odyssey; having started with romanticism, he felt the influence of expressionism, Dadaism and, towards the end of his life, socialist realism. Pro-communist sympathies played a fateful role in the composer’s life: on the second day of the war between Germany and the USSR he was arrested and died soon after in a concentration camp.
Hot-Sonate was composed in 1930 when he was engaged with jazz. The sonata was first performed during a Berlin Radio programme on 10 April 1930. Schulhoff performed the piano and the saxophonist of the London ensemble Savoy Orpheans Billy Barton played the sax.
The sonata became one of the most popular works by Schulhoff and was published the same year by Schott. The work is intense in rhythms, harmonies and jazz intonations, yet it does not make reference to specific genres. Schulhoff did not annotate tempi to the movements, limiting himself to the metronome.
Yekaterina Yusupova

Astor Piazzolla’s suite Cuatro estaciones porteñas, also known as The Four Seasons of Buenos Aires, emerged due to a happy combination of circumstances. First to appear was Verano porteño (Buenos Aires Summer) in 1965 for a performance based on Alberto Muñoz’ play Golden Hair. From 1969–1970 Piazzolla gradually added Otoño (Autumn), Primavera (Spring) and the famous Invierno (Winter). In the southern hemisphere the four seasons are reversed: winters are hot and the summers rather cool. Spring and autumn are expressed without great vividness, and in any case the seasons in Argentina are not so very different from each other as the twelve months of the year are in St Petersburg – and in the music of Tchaikovsky. And yet in Russia Piazzolla’s Cuatro estaciones porteñas have proved incredibly popular. These tangos – at times melancholic and at times aggressive – are full of romance. They have a hero, powerful emotions and a sense of free improvisation – everything as in the gypsy tradition. Moreover, Piazzolla’s works have a healthy “reserve of strength” and a complex technique of composition, a blend of classicism and jazz. Piazzolla wrote these tangos for his own quintet, though they are played by highly diverse ensembles – but typically the leading instruments are the strings.
In their day, the “new tango” style was regarded in the composer’s homeland with hostility. Today the tango and the bandoneon (a kind of concertina with which Piazzolla travelled the entire world) have become symbols of Argentina, leaving the Gauchos, ponchos and pampas grass in the shade.
Anna Bulycheva