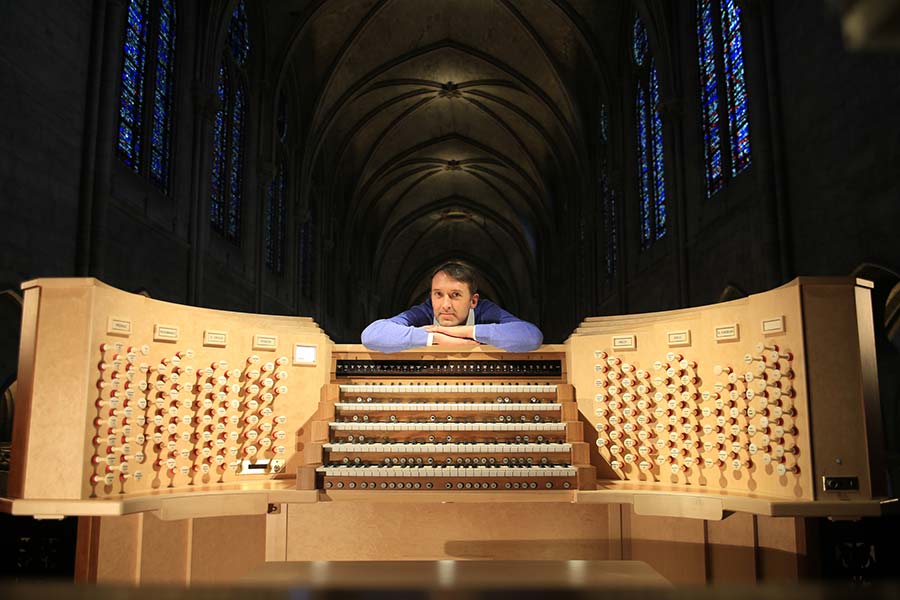 The style of Bach’s organ preludes and fugues was particularly refined during his Weimar period when he was Court organist there (1708–1717).
The Fantasia and Fugue in G Minor from the monumental BWV 542 cycle were probably composed separately. And yet they magnificently complement one another – the chromatic tension of the Fantasia is released in the refined and dance-like Fugue.
The Fantasia is a dazzling example of the baroque style, in which organists can improvise with as much freedom as their imaginations allow, as well as the rules of harmony and counterpoint. The Fugue is one of Bach’s most complex pieces of organ music. The composer was able to perform it during his visit to Hamburg in 1720 at an audition for the post of the organist at the Hauptkirche Sankt Jacobi. The Hamburg composer and music critic Johann Mattheson (1681–1764) later noted that the theme of the Fugue bore a resemblance to the Dutch folk song Ik ben gegroet van.

In May 1896 Brahms celebrated his sixty-third birthday. The same month saw the death of Clara Schumann – his close friend for many years. Brahms pulled himself together and set off for the Austrian resort of Bad Ischl, where he settled next to the glitterati of the Viennese hoi polloi. There he was diagnosed with liver cancer; in February Brahms suffered a stroke and on 3 April 1897 he died.
The twelve choral preludes for organ, including Herzlich tut mich erfreuen, O Gott, du frommer Gott and O Welt, ich muß dich lassen, were conceived and composed immediately following Clara’s death. Brahms performed the preludes for friends, but did not intend them to be heard by wider audiences. The series was published as late as 1902 as Op. 122.
German composers of the 16th-17th centuries were actively engaged in the genre of choral preludes, particularly Dieterich Buxtehude, Johann Pachelbel, Georg Böhm and Johann Sebastian Bach. Bach’s Orgelbüchlein – a cycle of forty-six preludes composed in Weimar – served as a model for Brahms. For his chorales Brahms selected words connected with the theme of death and produced two different versions of the chorale O Welt, ich muß dich lassen. The second of these (which completes the cycle) bears a resemblance to the concluding movement of Ein Deutsches Requiem.

The key to understanding Messiaen’s work lies in his own words: “I wanted to produce divine worship in the concert hall; to take the essence of liturgy, intended for believers, and to extract it from the church and bring it into other buildings not initially meant for such music but which ultimately accepted it with joy.” This description could equally well be ascribed to the organ cycle Sept Visions brèves de la vie des ressuscités. The cycle was composed in 1939. Messiaen prefaced the sixth meditation Joie et clarté with a quotation from the Gospel according to St Matthew: “Then shall the righteous shine forth as the sun in the kingdom of their Father” (13:43). The ecstatic joy of the righteous is depicted in the jazz-style music. It is known that Messiaen was not an admirer of jazz and spurned its influence on his own music, and so the syncopes and refined harmonies of this movement could actually have another source – oriental (in particular Indian) music, to which the composer had an attachment throughout his life.

The organist and composer Thierry Escaich was born in 1965. He studied at the Conservatoire de Paris, and in 1997 became the staff organist of the Église Saint-Étienne-du-Mont in Paris, replacing Maurice Duruflé. As a composer, Escaich made himself known in 1989 when he won the Franco-American Prize of the Florence Blummenthal Foundation. Escaich’s piano and organ improvisations laid the foundations for the music for Frank Borzage’s film Seventh Heaven, commissioned by the Louvre in 1999. To date, Thierry Escaich has composed over one hundred works.
The five verses from the sequence Victimae paschali laudes were written in 1991 following a commission from the French Ministry of Culture for the French Organ Forum and they represent variations on a mediaeval theme.
The sequence is a virtuoso sequence – a virtuoso canticle performed at mass before a reading from the Gospel. Following a decree of the Tridentine Cathedral (1545–1563) almost every sequence was expelled from church worship. Only four remained, among them the Easter Victimae paschali laudes. The text, and possibly the melody also, of the sequence were written by Wipo of Burgundy (11th century).

Maurice Duruflé’s Suite No 5 was written in 1933. Like many of the composer’s other opuses it presents unusually high demands from the audience. The suite is dedicated to the composer’s teacher and friend Paul Dukas. In the first movement (Prelude), Duruflé forces the organist to draw the gloomiest and darkest colours from the instrument. In the music of this movement there is something in common with Dukas’ Piano Sonata, which was composed in th same tonality. The second movement is a gracious sicilienne. The final toccata stands apart for its virtuoso nature, it’s a veritable whirlwind that mixes together everything in its path. The composer did not like the toccata, and he even refused to include it in the first recording of the suite, though today it is one of the most popular pieces in the repertoires of many organists.