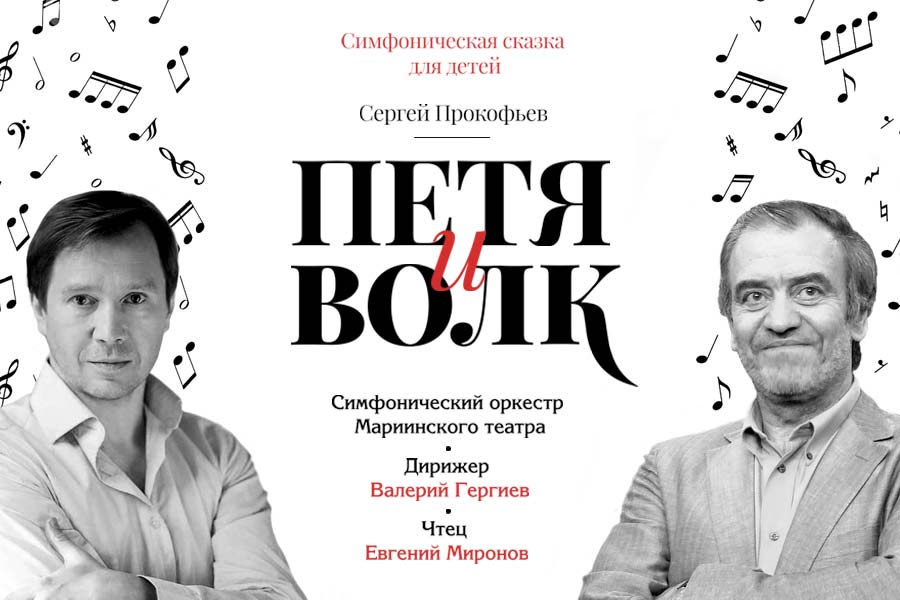 Peter and the Wolf

Marking 125 years since the birth of Sergei Prokofiev

PROGRAMME:
Sergei Prokofiev
Peter and the Wolf, symphonic tale for narrator and orchestra

Prokofiev’s interest in the orchestral compositions of the Viennese classics – first and foremost Haydn – emerged when he was a student at the St Petersburg Conservatoire in the conducting class of Nikolai Cherepnin. Prokofiev wrote that “It seemed to me that if Haydn had lived to the present day he would have retained his style of composition and accepted some of the new things that are going on. I wanted to compose just such a symphony – a symphony in the classical style.” This idea came to fruition several years later.
The orchestral format chosen by Prokofiev for the symphony matches that of the Viennese classics – a dual formation of winds (without aspectual instruments and trombones), kettle drums and string section. The sequence of the movements, their form and their drama also generally follow the model typical of a classical Viennese symphony. Only the traditional minuet or scherzo (the 3rd movement) is replaced with a gavotte – a genre which later came to be Prokofiev’s “calling card”. The musical language, however, without any doubt whatsoever makes this symphony belong to 20th century music. The unexpected and vivid modulations and shifts into remote tonalities, the use of instruments in extreme virtuoso form and the ironic interpretation of the musical material are all features of Prokofiev’s style which by that time had become fully developed. Prokofiev’s Classical Symphony is not a direct stylisation influenced by Haydn but rather an experience of rethinking, a look back from the 20th century at his legacy. This approach heralded the movement in music that came to be known as neo-classicism.
Vladimir Khavrov


In 1936, soon after his return to the USSR following many years spent abroad, Sergei Prokofiev met Natalia Sats who directed the Central Children’s Theatre in Moscow. The composer and his family frequently visited that theatre. Natalia Sats, a young stage director, proposed that Prokofiev compose a work for her young theatre-goers. Prokofiev found the idea interesting and in a short space of time conceived the famous story about Peter and the Wolf.
The tale Peter and the Wolf has the subheading “Symphony”. Each of the characters has a specific timbre and leitmotif. The protagonist – Peter – is represented by bowed string instruments, primarily the violin. His leitmotif is reminiscent of a pioneer march: after all, Peter is a pioneer. The Bird is, of course, represented in the flute passages in a high register. The oboe “quacks” as the Duck. The velvety timbre of the clarinet depicts the graceful Cat. The Grandfather is accompanied by the bassoon. The fearsome Wolf has a leitmotif in minor key performed by three French horns. The Hunters appear accompanied by the timpani, and their shots are depicted by the bass drum. In the final procession the wind instruments can be heard. In this manner, when listening to the tale, children receive an engaging and humour-filled lesson in instrumentation.
The plot of the tale, which is related to the children by a narrator, is accessible to even the very youngest audiences. Like a true fairy-tale hero, Peter understands the language of animals. Moreover, he is a real pioneer, meaning “set a good example for all children”: a good comrade is bold, resourceful, fair and kind. Early in the morning Peter enters a glade and observes the Bird and the Duck arguing, and he saves them from the danger of the prowling Cat. The Grandfather appears; he grumbles and leads his grandson away: the Wolf is lurking nearby. The Wolf is actually really there and the Duck ends up in his stomach. The keen-witted Peter, with the help of the Bird, catches the Wolf by the tail using a rope slung through the branches of a tree. As usual in tales about heroes, help from the forest custodians – the Hunters – comes when it’s all but a done deed. It remains but to tie up the Wolf. The finale is optimistic and the victors show mercy to the defeated villain (Peter does not allow the Wolf to be killed – the beast is taken to the zoo) and even the Duck is still alive: it’s quacking can be heard from within the Wolf’s stomach.
The first performance of the tale was something of a disappointment: the matinee philharmonic concert passed unnoticed. But later, when the role of the narrator began to be performed by Natalia Sats herself, the tale invariably enjoyed great success. Natalia Sats began by telling the children about the instruments, she displayed them, she presented the characters and the leitmotifs and then she read the text of the tale: “... I’ll go off to one side and your ‘well-known Aunt Natasha’ will become a performer of the tale, I’ll speak quietly, as if anticipating the first sounds of Prokofiev’s music – the most important thing now is the music.” Much later, in 1970, a radio performance of Peter and the Wolf featuring Natalia Sats and the State Symphony Orchestra of the USSR under the baton of Yevgeny Svetlanov was recorded; this “classical recording” remains well-known to this very day. There are also many other recordings of Peter and the Wolf: the work remains one of the most popular anywhere in the world. The tale is “taught” in schools in Russia and abroad, there have been several cartoon films based on it, sequels have been conceived and it has been parodied, amended and reworked in highly varied styles.
At the Mariinsky Theatre Prokofiev’s tale will be narrated for the first time by Yevgeny Mironov, People’s Artist of Russia and recipient of State Prizes of the Russian Federation.
Khristina Strekalovskaya