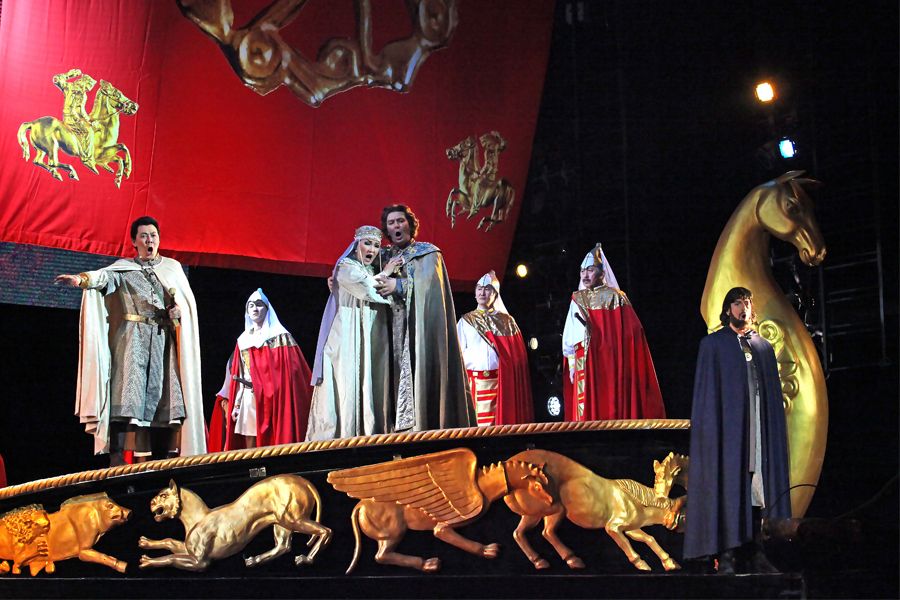 Music by Alexander Borodin
Libretto by the composer after motifs of The Lay of Igor's Host
version by Professor Yevgeny Levashev, Doctor of Art History

Prologue
1185. Prince Igor Seversky leading a Russian military detachment departs from Putivyl on a march against the nomadic Polovtsians. As they depart, the sun grows dim. All visualise the darkening of the sun as a fateful omen. The Prince's wife Yaroslavna begs her husband to remain. But desertion begins among the ranks. Two of the warriors – Skula and Yeroshka – hasten to Vladimir Galitsky. The boyars and the people are confused. Only Igor is confident and inflexible. And his inexhorable will is triumphant.

Act I
Scene 1
Much time has passed since the departure of the troops, but there is no news as to Prince Igor's destiny. Yaroslavna and her friends come to the shore of the river and, according to ancient custom, throw wreathes into the water as symbols of love and fidelity.

Scene 2
A wild feast is underway in the chambers of Prince Vladimir Galitsky. The men are delighted with the "achievements" of their master and urge their sovereign to be not a prince of his native Galich (from whence he was ignominiously ousted) but of Putivyl. Those in charge include the jesters Skula and Yeroshka. The girls who have come beg at least to allow their friend to go home, previously abducted and disgraced by Galitsky. He rudely sends them off.

Scene 3
Yaroslavna reprimands her brother for his dishonourble behaviour. Yet Galitsky has no thoughts of apologising whatsoever. He intends to send Yaroslavna to a convent and himself occupy the throne vacated by Igor. The misfortunes continue and grow. The boyars arrive bearing bad news: the troops have been defeated and Igor and his son have been taken captive. Vladimir Galitsky's servants begin a revolt. The powerful sounds of bell-ringing summon all the residents to the main square: the Polovtsians are already at the city walls. The city must be defended immediatel.

Scene 4
The Polovtsian camp at night.
Prince Igor is a captive. In his dreams he sees Yaroslavna. She appears in his dream-like consciousness in several images, and in each of them calls on the forces of nature to help her husband. As if every Russian woman in her image on a field of death is lookng into the face of dead warriors, Igor awakes. The Christened Polovtsian Ovlur proposes he escape. The Prince initially refuses. Then he begins to have doubts. For Prince Igor this is a sleepless night. But neither does the Polovtsians' camp sleep...

Act II
Scene 5
The same night. For Igor time has stood still, as if he has been a captive for a hundred years already.
But Konchakovna, the daughter of a Polovtsian Khan, impatiently awaits a meeting with Vladimir Igorevich. The young people passionately love one another. Khan Konchak appears, empathising with the Prince and wishing to have him as an ally. But here Igor is resolute. And yet the next scene – when a new group of male and female Russian prissoners are brought in – shocks him and forces him to think.

Scene 6
Vladimir Igorevich, Ovlur and two captive warriors convince the Prince to make use of the easiest moment for flight. The River Don will soon flood and provide a barrier of water to the Polovtsian hordes. Igor finally agrees and immediately sets out with Ovlur. Those left behind call on the River Don to help. The voices of the whole Russian people take up their incantation.

Scene 7
Following the storm a flood follows. This rising sun depicts a a limitless expanse of water.

Scene 8
Left in the Polovtsian camp, Vladimir and Konchakovna resolve not to hide their feelings before Konchak: they will either marry or accept death together. Konchak orders the wedding be prepared. The wedding procession ends with Polovtsian songs, games and dances.

Scene 9
A devastated Russia. Not recognised by anyone, Igor returns to his native city. Skula and Yeroshka sing a song for Vladimir Galitsky who has at last fallen asleep, sarcastically laughing at Prince Igor. And suddenly they recognise him. They understand that they face execution as deserters and traitors. And yet they find a solution. They arrange for the bells to be rung to assemble the people and be the first to tellthe people the joyful news. But the people, fatigued with incessant unhappiness, fail to appear for a long time. It is only then that some procession begins to approach – perhaps a crowd with their children, who have lost everything in flames, perhaps a prayerful crowd moving towards the ruins of the church. Thus Igor and Yaroslavna finally come together.

Epilogue
The procession is over. Now the most important of what has occurred must be faithfully reflected in the annalistic story – The Tale of Igor's Campaign. And the specific details should be left to the annals of history.