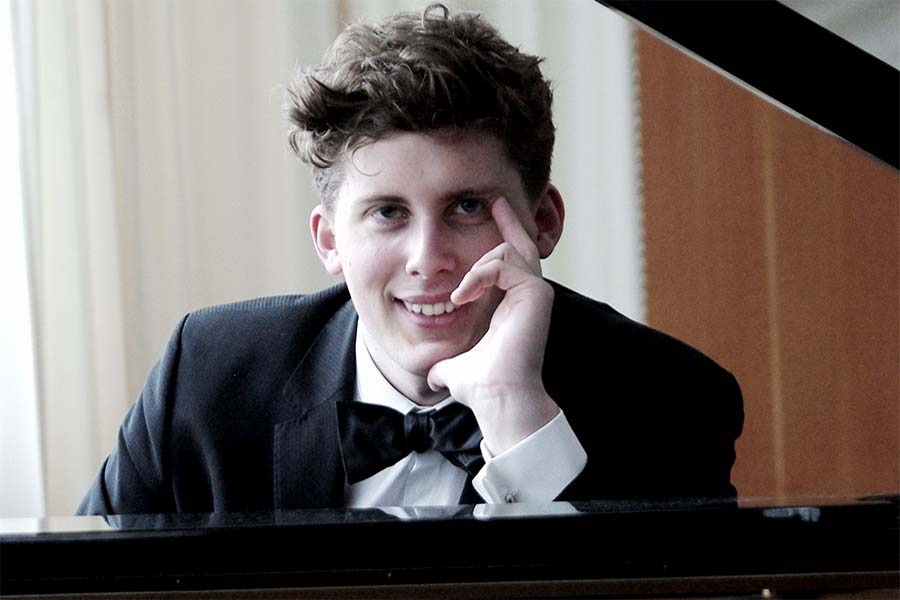 PROGRAMME:
Ludwig van Beethoven
Piano Sonata No. 2 in A major, Op. 2 No. 2

Improvisations on a theme by Carl Nielsen

Born in 1990, Oscar Micaelsson recently completed his master’s degree as a pianist at the Royal Danish Academy of Music in Copenhagen. He has been a student of Professor Niklas Sivelöv and Søren Rastogi at the conservatoire. In Copenhagen, his mentor is Deborah Wood. Over the past two years he has been back and forth from Paris, receiving private tuition from Professor Jay Gottlieb and Dr Naji Hakim. In addition to playing classical and contemporary piano music, Oscar Micaelsson is also active in the fields of jazz and improvisation, as well as being an organist and composer. He has written several texts and lectures including “Aspects of Jazz, Contemporary Music and the Classical Tradition”. As a composer he has written many works for orchestra, several concerti, a symphony and various works for piano, chorus and chamber music. Oscar Micaelsson has ten years of teaching experience.

The Royal Academy’s celebrations of Liszt in 2011 saw Oscar Micaelsson make his mark as a dashing recital soloist, and in 2012 he performed the fabled John Cage concerto at the annual Academy Festival of New Music.

He has performed concerts and recitals in several countries including Sweden, Iceland, Denmark and Germany. In 2012 he performed at the Tivoli Summer Festival, Copenhagen, and again in 2013 at the Beethoven Festival. Oscar Micaelsson has been invited to several prominent contemporary music festivals in Denmark. Numerous piano scores have also been dedicated to him.

In 2011 in Finland Oscar Micaelsson appeared at the Young Nordic Music Festival and at the PULSAR festival of contemporary music (Copenhagen), in the years 2009-2012 performing duo piano, chamber music and solo works. At the 2012 festival Micaelsson performed as the soloist in John Cage’s Piano Concerto for Prepared Piano and Chamber Orchestra with the Pulsar Sinfonietta under conductor Jean Thorel. That same year, he was invited to perform at the final concert of the Wundergrund Festival 2012 by SNYK DK, the organisation for contemporary and experimental music in Copenhagen. He later performed in September at the contemporary music festival Sonic 2.0, of which he is also an artistic director and organiser.

In June 2013 Oscar performed Gunnar Berg’s piano concerto Frise for piano and chamber orchestra at the Konzerthaus in Vienna’s 100 Jahre Österreichischer Komponistenbund festival with the European Contemporary Composers’ Orchestra. In 2014-2015 Oscar Micaelsson was part of a recently established contemporary ensemble, Ekkozone. They have performed and recorded works by Steve Reich and other composers at venues including the Roskilde Music Festival for Rock and Alternative Music, Jazzhouse in Copenhagen and the Tivoli Concert Hall. A CD with music by Steve Reich will be released in 2016.

Two years in a row (2014 and 2015) saw Oscar Micaelsson collaborating with the Copenhagen Opera Festival (a municipal opera cultural project).

In 2014 he was awarded the prestigious Leonie Sonning Grant for young upcoming artists. For the current 2015-2016 season Oscar Micaelsson has been made Artist of the Year as an artist-in-residence in the region of southern Sweden. He currently resides in Copenhagen, Denmark.