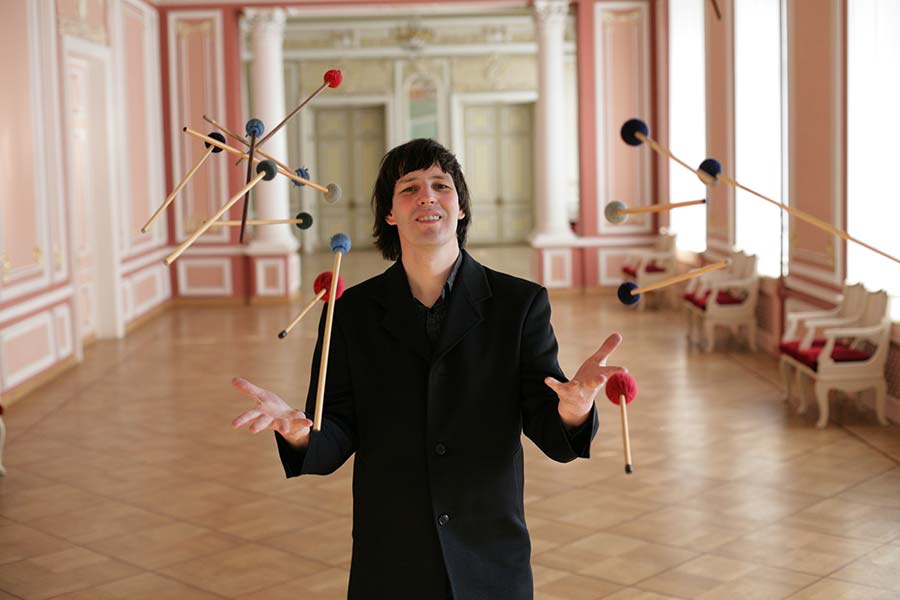 The Chizhik Jazz Quartet was founded by Alexei Chizhik. The ensemble’s first concert took place in 2006 as part of the St Petersburg Philharmonic’s subscription The Classics Meet Jazz. The quartet performs jazz versions of classical music (Mozart, Tchaikovsky, Bizet and Bach) as well as original works by Alexei Chizhik. The ensemble has produced five discs.
Alexei Chizhik is the only vibraphone player in Russia who uses five sticks simultaneously. He was born in Leningrad and in 1997 graduated from the St Petersburg State Rimsky-Korsakov Conservatoire. Has worked in several symphony orchestras. Appears as both a jazz and classical musician. Has collaborated with Plácido Domingo, Mstislav Rostropovich, Wynton Marsalis and Mariss Jansons. Has given recitals at the St Petersburg Philharmonic, the St Petersburg Cappella, Smolny Cathedral, the British Council, the Jazz Philharmonic and the jazz club JFC.
Since 1994 he has been actively involved in various international projects. Has toured to Great Britain, Japan, the USA, Finland, The Netherlands, Germany and Turkey. In 2005 he appeared with Larry Porter at the Petrozavodsk jazz festival JazzQ and with Andrea Marcelli at the City Jazz Festival in Moscow. Organiser of the St Petersburg Philharmonic’s subscription The Classics Meet Jazz. For many years he has given concerts in the Summer Garden.
Oleg Belov is a pianist, composer and producer. Graduated from the St Petersburg State Rimsky-Korsakov Conservatoire as a pianist. For six years he taught the improvisation class at the conservatoire. Collaborates with the TV programme Evening Urgant. Member of the Quartet in the Name of Music. Composes music for theatre productions and films. Has worked with Marc Almond, Igor Vdovin, Zemfira, Andrei Samsonov, DJ Fenix and other acclaimed musicians.
Pyotr Mikheyev appears in various jazz and classical music projects. These include Nichey Quartet, the Lera Gehner Band, The Karamazovs, the Yulia Khudyakova Quartet, the Zydeco Project and Doo Bop Sound. Percussionist with the group Pilotage.
Viktor Savich has performed with the groups Fun2Mass, Da (Double Penetration), the Vlad Zhukov Band and Upsweep. Has appeared with Bogdan Titomir and together with the Amy Pieterse Ensemble. Also appears as DJ Savich.