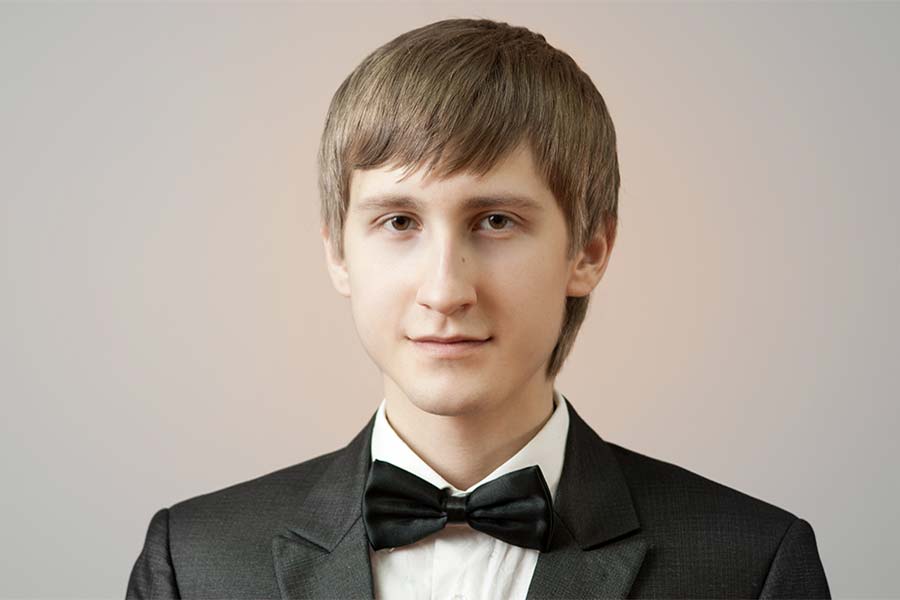 Sergei Rachmaninoff
Variations on a Theme by Corelli

The style of Joseph Haydn’s keyboard sonatas underwent a marked evolutionary process. If his first attempts at the genre were called divertissements (i.e. they were quite simply intended to divert) and were meant to be performed on the harpsichord, then the later ones, including the Sonata No 48 in C Major, were meant for the piano. The sonata has two movements; instead of an allegro typical of the sonata form, it opens with a slow movement, the form of which is structured on a variation of the initial two-bar motif. The lofty first movement contrasts with the light and carefree second movement – a rondo.

Robert Schumann’s three piano sonatas were written at almost the same time in the mid 1830s – the time he was developing a deep love for Clara Wieck, who later became the composer’s wife. In the Second Sonata the romantic surge is set within a traditional four-movement framework. The music of the sonata is dominated by perturbed “Florestan-like” moods, which is reflected in the type of the movement: Schumann wrote that the tempo of the first movement should be “as fast as possible”, and towards the end of the movement added the remark “even faster”. The role of the lyrical and melancholic intermezzo is played by the second movement, for which Schumann used a theme from his own youthful work Frühling. The third movement – a miniature scherzo with sharp syncopated rhythms – prepares us for the impetuous finale in the spirit of a “perpetuum mobile”. The original version of this movement proved to be on too great a scale and technically too complex. Some years later Schumann composed a different finale for the sonata, while the original Presto was published as a separate work.

Franz Liszt, in addition to original works for piano, produced numerous transcriptions of piano, orchestral and vocal music by other composers including lieder by Franz Schubert. In Barcarole the romantic image of sailing on a gondola in Venice at night is conveyed by the rocking water-like imagery of the movement in the piano part.

The cycle Transcendental Études is one of the most demanding of Liszt’s original works. It is a veritable self-portrait of Liszt as a virtuoso performer. Following the romantic tradition, Liszt gave the études titles connected with scenes of nature or fantastic legends. The programme for the étude Wilde Jagd comes from a Germanic-Scandinavian mythological plot about ghostly horsemen flying through the sky at night. In different versions of the myth the leader of the cavalcade is named after the legendary King Arthur, One God, or even the famous pirate Francis Drake.

Pyotr Tchaikovsky’s Eighteen Pieces, Op. 72 was written at the same time as the Sixth Symphony. The cycle is varied in content – the nostalgic moods with which Elegiac Song is imbued sit side by side with the drawing-room and dance-like mazurka (Un poco di Chopin) and the scherzo-like waltz in the unusual 5/8 measure. The cycle concludes with the humorous Dance Scene with the secondary title Invitation to a Trepak (a joking reference to Weber’s Aufforderung zum Tanz.

Sergei Rachmaninoff’s Variations on a Theme of Corelli were written after his emigration; it was to be his last work for solo piano. The cycle is based on the theme of a folia, an early Spanish dance which was used in one of 17th century Italian composer Arcangelo Corelli’s violin sonatas and which bears a resemblance to the sarabande. The twenty variations form a dialogue between styles and eras; the theme takes on features of a minuet, jazz improvisations and the romantic nocturne. The finale of the cycle is unusual – the two final variations are followed by the dramatic culmination, and then comes a quiet and peaceful coda.

Danse macabre is a genre that has been known in European culture since the Middle Ages. It has been tackled by many artists and writers as well as composers including Franz Liszt, Modest Musorgsky and Sergei Rachmaninoff. Camille Saint-Saëns’ symphonic poem was composed after the verse by Henri Cazalis. By quite literally following the text of the poem, Saint-Saëns gives the plot an ironic rather than a mystical interpretation: using orchestral means he depicts a clock striking twelve, mournful violin being played by Death, the clip-clop of skeletons’ bones and the crow of the cockerel. Soon after the premiere, Liszt produced a transcription of the piece for piano, and in the 20th century Vladimir Horowitz produced a new version of his own.
Vladimir Khavrov