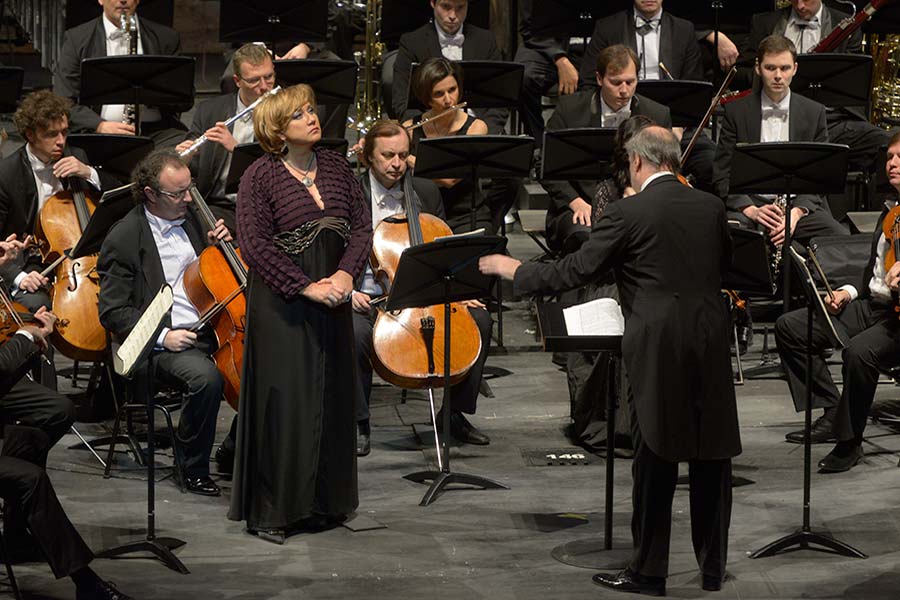 The Merry Science
Gustav Mahler’s Third Symphony
“For me, composing a symphony means using all available methods of musical technique to create a world. ”
“I am convinced that if God had been demanded to create a programme for the ‘world’ he founded he, too, would have been unable to do so.”
Gustav Mahler (from recollections and letters)

The composer who dared at such open “competition” with God was also a great conductor; his name is connected with an entire era of the history of conducting. At the conductor’s stand Gustav Mahler served Mozart and Beethoven, Wagner and Bruckner, Verdi and Tchaikovsky with sacrificial adoration... Mahler the conductor truly created masterpieces of the classics and their contemporaries – as if he were their co-composer, their co-creator.
There is the well-known aphorism of Friedrich Schelling: “Architecture is music in space, as if frozen in time, stone-like music.” Mahler “translated” this into his own language as a conductor: “Music is architecture within the realms of time, it is mobile and fluid architecture.” And, in accordance with this concept, he created his grandiose temples of symphonies and operas in the presence of an audience of thousands. He didn’t instil the contours of others’ works with slavish student-like strokes, he created in the style of the great “architects”. And this progress of construction in musical form, meaning its development over time, was an endlessly important final aim for Mahler – the perfect form of the crystal through which the audience’s subconscious hears the work echo.
It was with this that Mahler made his most important contribution to the aesthetics and artistic practice of conducting. Mahler was not the first conductor to interpret musical performances; the foundation of the art of the conductor had been laid by von Weber and Berlioz, Wagner and Liszt, Richter and von Bülow. But Mahler was the first to have a deep awareness of the Wagnerian dread of the crystalline form and he subsequently transformed the process as a conductor and as a composer. When Mahler conducted performances of his own symphonies he happily appeared as the “architect” and the “builder” of an architectural project in the concert hall. After Mahler’s death this was spoken of by major theoreticians – Ernst Kurt in his monograph about Bruckner (1925) and Boris Asafiev in his thus-entitled book Musical Form as a Process (1930).

Wagner’s name is most often related to that of Mahler in connection with Mahler-the-conductor’s performances of exemplary productions of Wagnerian operas – Lohengrin, Tristan und Isolde and the tetralogy Der Ring des Nibelungen. But of no less importance are the decisive deductions made by Mahler-the-composer from Wagner’s judgement about his emergent symphony and the instrumental music as a whole. One should recall these categorical expressions of the young Wagner about his Ninth Symphony: “In Beethoven’s last symphony the music goes beyond its own boundaries and becomes universal art. This symphony is a human gospel of the art of the future. Following it, there is no possible movement forwards...” (Das Kunstwerk der Zukunft, 1849). Also in 1849 Wagner concluded another fundamental article entitled Art and Revolution. On the title page, using the familiar expression, he states that “Where words leave off, music begins”, and he produces the highly significant comment: “Beethoven, The Ninth Symphony proves the reverse: ‘Where the music leaves off, the words begin.” And here are some lines from a letter from Mahler to Arthur Seidel dated 17 February  1897: “Thinking about the greater musical canvas I always get to the moment when I have to sing the  Word as a carrier of my musical idea. The same as it probably war with Beethoven and his Ninth Symphony...”
Natalie Bauer-Lechner (an Austrian violist and friend of Mahler when studying at the Vienna Konservatorium) recalls the composer’s statements in her own memoirs: “The idea of having a human voice in my Second Symphony so that people understood it was truly an ‘egg of Columbus’. It is a great pity I don’t yet have the same in the First! In the third I am no longer ashamed…” From a letter to Friedrich Lehr dated 29 August 1895 Mahler writes: “My new symphony will last about an hour and a half: everything in it is in the grand symphony style...” and it goes on to convey the symphony’s programme, borrowing the title of The Merry Science from Friedrich Nietzsche.
I. Pan Awakes, Summer Marches in
II. What the Flowers in the Meadow Tell Me
III. What the Animals in the Forest Tell Me
IV. What Night Tells Me (solo contralto)
V. What the Dawn Tells Me (female chorus and solo contralto)
VI. What Love Tells Me
VII. Heaven (solo soprano; humorous part)

The final version of the Third Symphony has six movements; the proposed seventh movement was not included, instead forming the finale of the Fourth Symphony. Later Mahler would remove the programme of the opus, though his letters to colleagues and friends are full of notes that reveal the composer’s idea.
“Summer brought me the Third – possibly this is the most mature work of any that I have written so far... My work is a musical poem that encompasses all the stages of development in a gradual growth. It begins with lifeless nature and rises to God’s holy love... to the fragile flesh of the human heart that strives to overcome the flesh and raise itself to God... My symphony should be one that the world has never heard before! In it nature is given a voice...”
In the gargantuan first movement (in the form of a rondo sonata) there are images of “nature, as if breaking ice that encroaches the shores” and symbolising the almost rebellious masses (Ivan Sollertinsky). In the heroic march step of Richard Strauss it was not by chance that First of May Columns were engaged.
The second movement is a graceful minuet. “... It was the most carefree thing that I have ever written, so unbaked, so uncooked as only flowers can be” (Mahler, memoirs of Natalie Bauer-Lechner). Again we have a rondo: the serene refrain (actually a minuet) is shaded by a sequence of capricious and faster dances in the central episodes.

The third movement is a scherzo in a complex three-part format. The melodic image framed by the scherzo is an instrumental version of the song Change of the Guard in Summer from Fourteen Songs to lyrics from Des Knaben Wunderhorn. In the central part, in the naïve sound of the post-horn, Russian audiences will undoubtedly hear the motif of the Aragonese Jota familiar from Mikhail Glinka’s Spanish Overture.
The unexpected impetuous coda adds a dramatic note to the flowing movement of the scherzo.
The fourth movement, notated by the composer as Misterioso, is, first and foremost, addressed to mankind. For the first time we have the voice – the contralto solo. “And the first word of the symphony is spoken here” – “O, Mensch! A man who is defenceless before universal and midnight nature ... alone before the bottomless world, before all the grief of the Earth (Inna Barsova). The fourth movement was written in strophic form, dictated by Friedrich Nietzsche’s philosophical poem Also Sprach Zarathustra:
O man, take care!
What does the deep midnight declare?
“I was asleep –
From a deep dream I woke and swear: –
The world is deep,
Deeper than day had been aware.
Deep is its woe –
Joy – deeper yet than agony:
Woe implores: Go! But all joy wants eternity –
Wants deep, wants deep eternity.

The fifth movement opens with morning divine service heralding the dawn of the new day. Everything is imbued with sunlight. To the accompaniment of the boy’s chorus imitating bell-ringing (“ding-dong-ding-dong”) and the orchestra, which is dominated by the winds supported by the bells, the harp and the triangle, the female chorus sings the naïvely childish song about the heavenly joy of Des Knaben Wunderhorn – “Es sungen drei Engel”. The tale of the transgressions and suffering of Peter in the contralto solo and chorus dialogue is adorned with gloomy tones, and the reverential amazement at the power and mercy of God is conveyed in the choral episodes, reminiscent of liturgical music.
Three angels sang a sweet song
In Heaven of joyful bliss.
They loudly rejoiced that
Peter freed them from sin!
And when Jesus conducted the Last Supper
With His twelve apostles he asked:
“Why are you here? When I
Look at you, you cry for me.
How can I not cry, good Lord?
I have broken the Ten Commandments,
I wander, groaning loudly:
Forgive me, Lord!
“If you have broken Ten Commandments
Fall on your knees and pray to God
Love God forever
And you shall achieve heavenly peace”
Heavenly joy is a blessed city.
Heavenly joy to which there is no end.
Presented to Peter from Jesus,
Through Christ all come to bliss.”

The highlight of the symphony, the slow finale in D Major, is a triumphant instrumental hymn praising God, a hymn of all-consuming Love (God Is Love). The lengthy approach to the spirit beyond the clouds is consummated by a monumental apotheosis – one of the most beautiful and most majestic pages in world symphony music. The dazzling brass and the powerful full-sounding string chorus confirm the credo announced in the preceding fifth movement: “Through Christ all approach perfect bliss.”
Iosif Raiskin