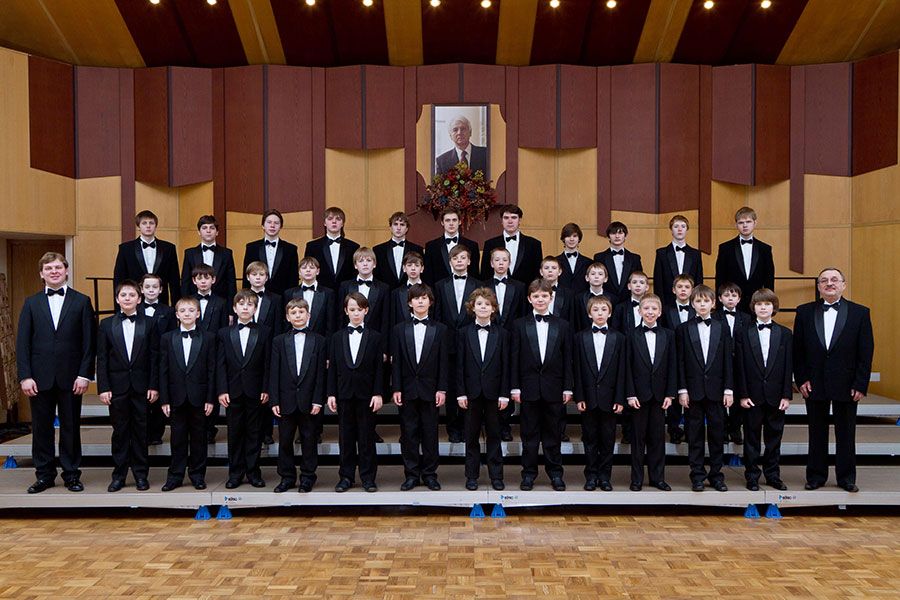 The Boys’ Chorus is an eternally youthful and yet the oldest of all the Academy’s concert ensembles. It was founded in 1944 – during World War II – when the great Russian musician and educator Alexander Vasilievich Sveshnikov formed the Moscow Choral School to train boys who would go on to create the legendary ensemble. With time, the sound of the chorus has become a symbol of lofty and noble art.
The history of the Boys’ Chorus is rich in names and events. In the course of sixty-nine years, the choral school has trained some six hundred professional musicians who have made and continue to make a serious contribution to the development of music in Russia. These include such conductors as Alexander Yurlov, Vladimir Minin, Boris Kulikov, Yevgeny Tytyanko, Igor Rayevsky, Leonid Nikolaev and Eduard Serov, such composers as Rodion Shchedrin, Alexander Flyarkovsky, Rostislav Boiko, Vladislav Agafonnikov, Valery Kikta and Eduard Artemiev and the singers Vsevolod Grivnov, Dmitry Korchak and Vasily Ladyuk to name but a few.
Inspired by the angelic sound of the children’s voices, Prokofiev and Shostakovich wrote music for the chorus, which has been conducted at concerts by such acclaimed maestri as Nikolai Golovanov, Yevgeny Mravinsky, Samuil Samosud and Kirill Kondrashin and accompanied by such brilliant singers as Zara Dolukhanova, Ivan Petrov, Irina Arkhipova and Ivan Kozlovsky...
Following a soaring flight over the chorus’ first two decades there came a certain lull which was followed by an artistic renaissance in the 1970s when the ensemble was headed by Viktor Popov, a pupil of Alexander Sveshnikov. Starting in the mid-1980s the Boys’ Chorus undertook annual foreign tours with diverse concert programmes (Russian Christmas in Germany, Belgium, The Netherlands and France; Missa Russika in Germany; Christmas Returns in the USA; Ave Maria in Europe, Japan, Taiwan and Hong Kong among others). The chorus’ performances are invariably much-feted successes, something that is reflected in the international press.
With the establishment in 1991 of the Academy of Choral Art, the Boys’ Chorus became part of the Academy’s united chorus while remaining an independent creative ensemble. Currently the Boys and Young Men’s Chorus of the Choral School continues to work intensively in Russia and abroad. They are frequently joined by such acclaimed conductors as Valery Gergiev, Vladimir Fedoseyev, Vladimir Spivakov and Mikhail Pletnev among others. The Boys’ Chorus also frequently performs solo concert programmes.
Today the Boys and Young Men’s Chorus forms the basis of the Academy’s performance base – its future. Performances by the young musicians augment the artistic traditions and glory of the Russian vocal school. The Boys’ Chorus is directed by senior lecturer Alexei Popov, a prize-winner at international and All-Russian Competitions. The ensemble’s chorus masters are Alexander Shishonkov (Honoured Artist of Russia), Andrei Gerasimenko and Denis Khramov.