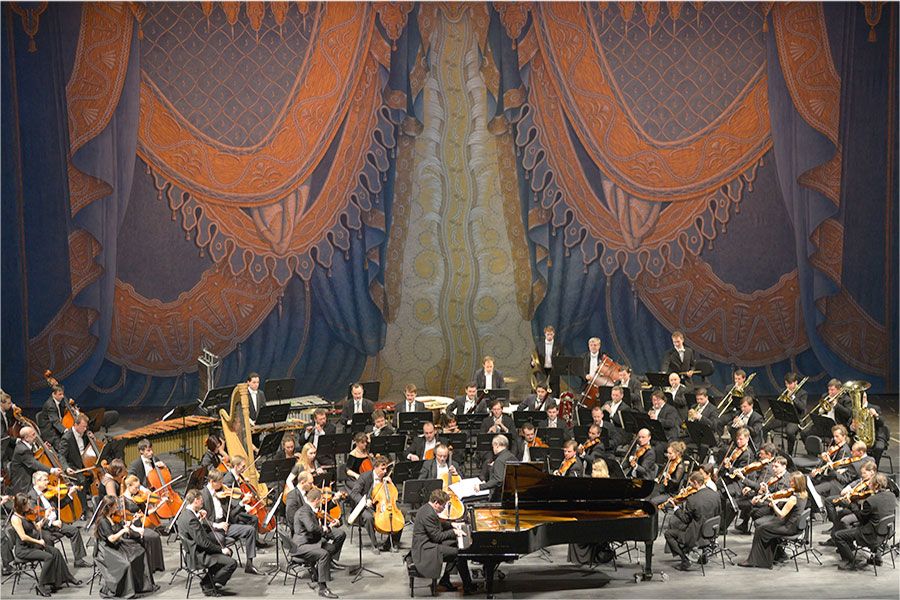 On the eve of the Year of Prokofiev

Prokofiev’s interest in the orchestral compositions of the Viennese classics – first and foremost Haydn – emerged when he was a student at the St Petersburg Conservatoire in the conducting class of Nikolai Cherepnin. Prokofiev wrote that “It seemed to me that if Haydn had lived to the present day he would have retained his style of composition and accepted some of the new things that are going on. I wanted to compose just such a symphony – a symphony in the classical style.” This idea came to fruition several years later.
The orchestral format chosen by Prokofiev for the symphony matches that of the Viennese classics – a dual formation of winds (without aspectual instruments and trombones), kettle drums and string section. The sequence of the movements, their form and their drama also generally follow the model typical of a classical Viennese symphony. Only the traditional minuet or scherzo (the 3rd movement) is replaced with a gavotte – a genre which later came to be Prokofiev’s “calling card”. The musical language, however, without any doubt whatsoever makes this symphony belong to 20th century music. The unexpected and vivid modulations and shifts into remote tonalities, the use of instruments in extreme virtuoso form and the ironic interpretation of the musical material are all features of Prokofiev’s style which by that time had become fully developed. Prokofiev’s Classical Symphony is not a direct stylisation influenced by Haydn but rather an experience of rethinking, a look back from the 20th century at his legacy. This approach heralded the movement in music that came to be known as neo-classicism.
Vladimir Khavrov


A waltz is danced for mere moments.
The gavotte has been danced for centuries...
Konstantin Balmont
In his sonnet dedicated to the young Sergei Prokofiev – who had composed his Third Piano Concerto – Balmont prophesied the mature maestro’s greatest ballets. Ballets about the greatness and the strength of love, ballets imbued with the languor of love, music born from love, con amore, amoroso. Some fifteen years separate the ballet scenes the poet “saw” in the Third Concerto and Prokofiev’s Romeo and Juliet (in which, like an echo of younger years, one can hear the Gavotte from the First “Classical” Symphony.) There would be anoth r five years before Cinderella with its typically Prokofiev “auth ntic” gavottes, bourées, passe-pieds and pavanne, with its intoxicating waltzes, variations and mazurka...
It is hard to believe that for several years the completed score of Romeo and Juliet never made it onto the Russian stage. It is hard to believe that the Bolshoi Theatre initially rejected Romeo and Juliet; the world premiere of this brilliant Russian ballet took place on 30 December 1938... in Brno in Czechoslovakia, the town of Leoš Janáček, thanks to the enthusiasm of the choreographer and performer of the lead male role Ivo Psota. Due to the tense pre-war situation (the notorious Munich Agreement) the composer did not witness the stage birth of his opus.
In Russia, the ballet was saved by the Mariinsky (th n the Kirov) Theatre; the Leningrad premiere on 11 January 1940 was a huge success and proved to be Galina Ulanova’s finest hour. But here, too, the fate of this masterpiece literally hung by a hair. Two weeks before the first performance the orchestra came to a decision at a stormy meeting: to drop the performance in order to prevent disaster! And at the th atre wits commented that “never was a story of more woe than this of Prokofiev and his ballet music”. How th y were disgraced! Apropos, long before the th atre premiere, the music from Romeo and Juliet drew an ecstatic response from audiences in concert halls. Three Suites for Symphony Orchestra from the ballet music and Ten Pieces for Piano (frequently performed by Prokofiev himself at his evenings of keyboard music) soon became extremely popular, which to a great extent also assisted the stage production of the work.
Iosif Raiskin

Piano Concerto No 2 was one of Sergei Sergeyevich Prokofiev’s favourite works. The composer first performed it at the end of the summer season in 1913 in Pavlovsk (when it was conducted by Alexander Aslanov). The premiere was accompanied by a “glorious” scandal: Prokofiev was labelled as both a cubist and a futurist. And he immediately composed a “cubist-futurist” and incredibly complex piano concerto as his calling card: he performed it in London for Diaghilev when they first met, and he selected it for his official debut in Rome in 1915. When Prokofiev emigrated, the score remained in Russia (and has never been found to this day). In 1923 the composer revived it and soon had the concerto published.
Today it is hard to understand what could have scared away audiences in the bewitching first section. Could it be the massive cadenza of the soloist that slowly approaches its culmination, so complex that it is written over three lines (as if for three hands)? The second section, a scherzo, is one of the finest pieces in the “perpetuum mobile” genre. The piano part does not have one single pause! The start of the third section, an intermezzo, deserves the title of “futurist,” although the soloist performs a refined and fantastical theme. And the stormy, unbridled start of the finale is wisely balanced by the gentle middle section in the character of a nursery rhyme.
Anna Bulycheva