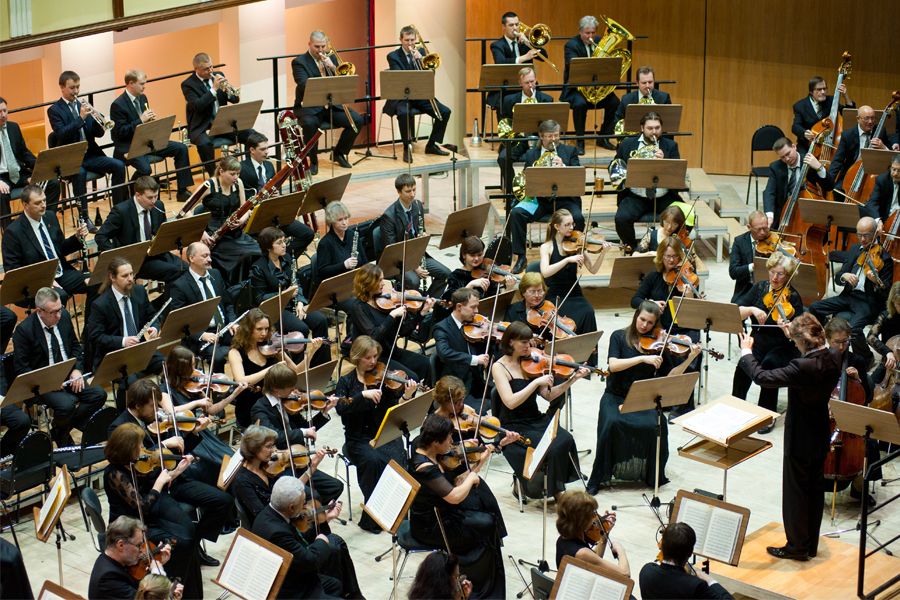 Alexander Scriabin completed work on his Second Symphony in the summer of 1901. Thanks to the support of arts patron Mitrofan Belyaev and Director of the Moscow Conservatoire Vasily Safonov he didn’t have to worry about his new work’s future. The score was published in 1903. Even earlier, in January 1902, the symphony was performed for the first time in St Petersburg under the baton of Anatoly Lyadov, while just over a year later Safonov performed it in Moscow.
Lyadov’s involvement in the history of the Second Symphony is surprising. It is unlikely that he approved of the dense and astringent orchestration in the manner of Richard Strauss. Neither would he have empathised with the pathos of Scriabin’s work, heroic and at the same time very personal.
The composer did not provide a programme for the symphony, but its music clearly has a hidden plot. The symphony’s first movement is, essentially, a powerfully expanding introduction, without a pause flowing into the next movement. There is something fateful in the insistently repeated principal theme and in the beat of the timpani. The fifth movement of the symphony is a variation on the music of the first in the form of a victory march, the plastique of which the composer subsequently regretted. On the other hand, Scriabin was totally satisfied with the pastorale third movement, and time has proved him right.
Anna Bulycheva

Moisey Weinberg wrote twenty-two symphonies, seventeen string quartets, six piano sonatas, concerti, works for musical theatre and other compositions. The fate of many of his works was not a simple one. A Polish Jew, Weinberg emigrated to the USSR after the Nazis came to power. During the years of struggle against formalism, the composer was accused of a lack of ideas and promoting Jewish music and his works ceased to be performed. In 1953 Weinberg spent several months in prison and was released only following Stalin’s death.
Despite his wide legacy in classical genres, broad popularity came to Weinberg as a composer of music for films. He composed music for films The Cranes are Flying, The Hyperboloid of Engineer Garin, Afonya and Fyodor Khitruk’s cartoons about Winnie-the-Pooh and many others.
Weinberg’s anti-war ballet The White Chrysanthemum about a girl who survives air-raids on Japanese cities was never staged. The composer subsequently reworked the music of the ballet into a suite (Choreographic Symphony) consisting of six parts.
Vladimir Khavrov

The Omsk Academic Symphony Orchestra was founded in 1966 on the initiative of Semyon Kogan who remained at the head of the ensemble for more than ten years. In 1970 the orchestra began to tour, since 1975 it has taken part in contemporary music festivals and in 1984 it won the 1st prize at the All-Russian Competition of Symphony Orchestras.
Over the years the orchestra has been conducted by Viktor Titz, Andrei Chistyakov, Nikolai Diadura, Viktor Barsov and Walter Mnatsakanov. The ensemble has also worked with Leo Ginzburg, Nathan Rakhlin, Yuri Temirkanov, Karl Eliasberg, Mark Paverman, Arnold Katz, Veronika Dudarova, Emin Khachaturian and Fuat Mansurov.
From 1992–2004 the orchestra was directed by Yevgeny Shestakov. In 1994 the orchestra undertook its first tour abroad; in Italy the ensemble gave forty concerts to great acclaim. In 1996 the Omsk Symphony Orchestra was awarded the title of “Academic”.
From 2005–2009 the orchestra was directed by Yevgeny Samoilov. At the same time, the ensemble’s Principal Conductor was Dmitry Vasiliev, who in 2010 became the orchestra’s Artistic Director.
In 2008 the Omsk Academic Symphony Orchestra under Dmitry Vasiliev appeared in Moscow as part of the Moscow Philharmonic’s subscription series Symphony Orchestras of Russia. One significant event in the orchestra’s history came with its appearance at the IV Festival of the World’s Symphony Orchestras (Moscow, 2009) and the I All-Russian Symphony Forum (Yekaterinburg, 2010).
The orchestra has toured to Italy, Spain, Portugal, Germany, Austria, Morocco and the USA. Musicians that have appeared with the orchestra include Nikolai Petrov, Mstislav Rostropovich, Mikhail Pletnev, Dmitri Hvorostovsky, Liana Isakadze, Viktor Tretyakov, Alexander Ghindin, Denis Matsuev, Vadim Repin, Sergei Stadler, Daniil Shafran, Tatiana Grindenko, Boris Berezovsky, Natalia Gutman, Eliso Virsaladze, Dmitry Bashkirov, Alexei Utkin, Alexandre Bouzlov, Mikhail Lidsky, Freddy Kempf, Pierre Amoyal and Sayaka Shoji.
The orchestra features in world and Russian premieres of works by contemporary composers. Since 2008 on the initiative of Dmitry Vasiliev it has run the Festival of New Music which has seen performances of works by Sofia Gubaidulina, Alfred Schnittke, Andrei Karamanov, Alexander Tchaikovsky, Ilya Heifets, Efrem Podgaits, Adam Klotzek, Mikhail Bronner, Tolib Shakhidi and Yuri Kozulin.
The orchestra works with the recording companies Danacord Records, Universal, Handel Classic Audio and Toccata Classics. Future plans include the release of a series of recordings of little-known works by Soviet and contemporary Russian and foreign composers.
The orchestra’s educational programmes include the subscription series Meeting the Orchestra and Music-Lovers. Together with the Children’s Philharmonic, the Omsk Symphony Orchestra runs the regional children’s competition “Soloist of the Orchestra”. In 2006 the Omsk Philharmonic established the Semyon Kogan Prize, which is awarded by the maestro on an annual basis to one of the ensemble’s musicians.