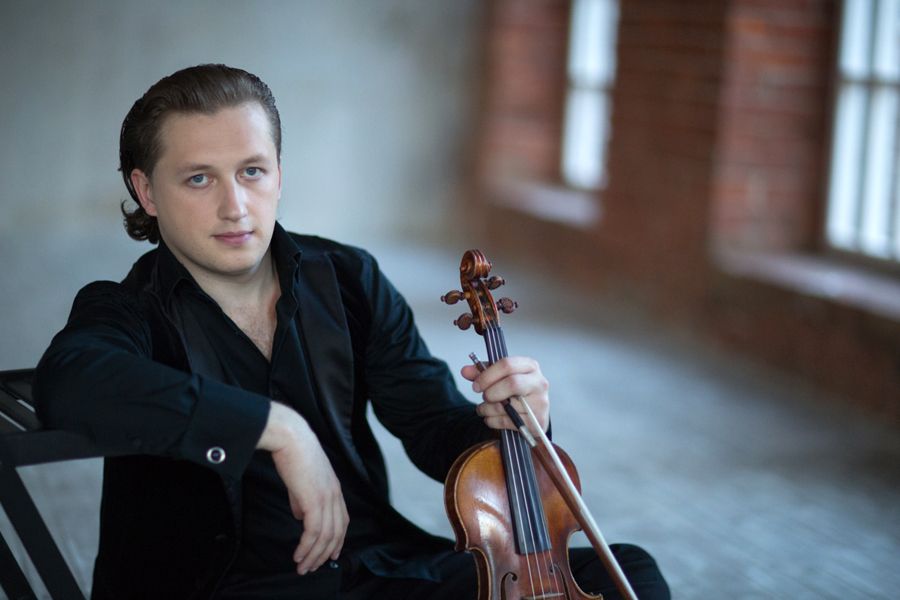 César Franck
Sonata for Violin and Piano in A Major, FWV 8

Ludwig van Beethoven often wrote sonatas specially for famous violinists of the age, but the three sonatas, Op. 30, that emerged in the spring of 1802 were intended for the amateur violinist Emperor Alexander I of Russia. It is probable that the fact they are dedicated to the Emperor occurred through Count Razumovsky, the Russian Ambassador in Vienna.
The start of 1802 was a time of flourishing in Beethoven’s life when he wrote music in abundance, though this was also when he lost any hope of his hearing’s improving and his sense of fate grew: in autumn the same year Beethoven wrote his Heiligenstadt Testament. This duality of his situation was reflected in his music: in opus 30 between the two beautiful sonatas in major there is the Sonata in C Minor, which in an analogy with Beethoven’s Piano Sonata in C Minor may be called Pathétique. Instead of the standard three sections, in this one there are four. The longest and most ponderous is the second, the lofty Adagio cantabile. The third section is a scherzo in the primordial sense of the word (“jest”), where the mischievous rhythmic figures are knocked aside. However, the outer sections of the sonata are dramatic and perturbed, and several details (the march as a secondary theme in the first section and the threatening fateful basses) hint at the fact that this is music of a time of war.
Anna Bulycheva

If one had to describe the music of Johannes Brahms using just one word, then best of all would be the word “noble”. Surprisingly, many of the great composer’s contemporaries, while admiring his art, never saw that this gloomy misanthrope and grumbler – which he was, as his music reveals – as being subtle, clever and refined. Through the sounds he used in his “aesthetically legitimate conservatism” (Carl Dahlhaus), Brahms, like no other, was able to express passion without strain and show the inexhaustible depths of the human soul.
As a major symphonist of the latter half of the 19th century, Brahms wrote relatively little for the violin – just one concerto and three sonatas. All three works went on to be widely acclaimed and entered the repertoires of every outstanding performer.
The Sonata for Violin and Piano in D Minor (1888) was Brahms’ last violin sonata. It is dedicated not to a famous violinist but to the conductor and pianist Hans von Bülow. It is a real symphony in miniature, but intended to be performed on just two instruments.
Svetlana Nikitina

César Franck’s Violin Sonata forms part of the triad of chamber ensembles produced by the composer in the last decade of his life along with a piano quintet and string quartet. All three works are acclaimed as dazzling examples of French chamber music.
Franck dedicated the score as a wedding present to its first performer Eugène Ysaÿe, a famous Belgian violinist. Franck’s sonata was not just one of Ysaÿe’s favourite works, performed until the end of his career, but also entered the repertoires of numerous celebrated violinists.
The four-part form of the cycle, which begins with a measured slow movement, brings to mind the structure of Bach’s sonatas. Turning to recitative (in the third movement) and polyphonic forms (the main theme of the finale is a canon) also makes us think of the principles of the Baroque era, though – of course – this sonata belongs to the late-Romantic style, by no means least because of the rich chromatic harmonies. The first musical idea of the sonata is in the colourful Major-key ninth chord, the sound of which Franck literally is in love with, not hastening to settle it in a steady assonance – he creates a link with Debussy’s yet-to-be-written searches in harmony.
In the sonata we have a vivid example of the principle of “cyclical themes” by which the cycle is linked by one motif that appears in every movement. Franck also made use of this principle in his symphony music. Here this element is provided by the intonation of the rising tercet that appears at the very start of the first part of the piano and then with the violin. The violin, which stands apart throughout the sonata, was later transposed for various instruments including the flute. The arrangement for cello produced by French cellist Jules Delsart was approved by Franck himself. The natural sound of the sonata when performed on the cello allows us to see it as an equal partner to the original.
Vladimir Khavrov