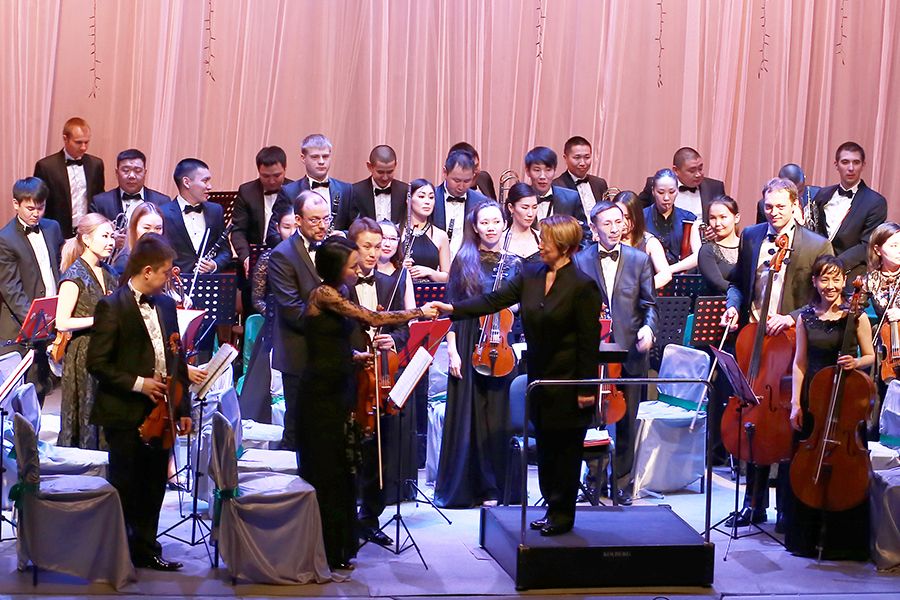 PERFORMERS:
The Symphonica ARTica symphony orchestra of the State Krivoshapko Philharmonic of the Republic of Sakha (Yakutia)

Ludwig van Beethoven’s Concerto for Violin, Cello and Piano in C Major follows the traditions of the Baroque concerto grosso and the sinfonia concertante – both genres presupposed the presence of several soloists contrasting with the orchestra. The combination of the violin, cello and piano enjoyed great popularity as a separate ensemble in its own right – the piano trio. Haydn, Mozart and Beethoven himself composed for just such an ensemble. However, this combination of instruments had never been used as a solo group in a concerto prior to Beethoven.
The Triple Concerto is one of the first works composed by Beethoven for Archduke Rudolf of Austria, who was later to be his patron. At the time, the Archduke was fifteen years of age. He was a talented amateur musician and under Beethoven’s guidance he turned his efforts to composition. In the concerto, the piano part was obviously intended for him, being technically less demanding than in Beethoven’s other works for the piano of that period. The parts of the violin and cello require greater mastery, the composer having written them for professional musicians. Throughout the entire concerto the cello appears as the principal solo instrument – its part is well-developed and virtuoso and in each movement it is the cello that first performs the main themes.
Beethoven wrote the Triple Concerto during a period of creative regeneration. At the same time he composed the Kreutzer Sonata for violin and piano, the piano sonatas Aurora and Appassionata and the symphony Die Heroische. In comparison with these works the Triple Concerto is less well-known. It contains no dazzling solo cadenzas or the symphonic development so typical of Beethoven. The composer constructed the drama of this concerto through other means – using a limited interaction between the soloists and the orchestra and between each other, through the contrast of sonorities and the lyrical rethinking of the themes.
Vladimir Khavrov

The Symphonica ARTica symphony orchestra of the Yakutia Philharmonic was founded in 2012.
The start of the orchestra’s activities can be linked with international concerts that took place on 10 May and 17 July 2012. These concerts featured musicians of the Yakutia Philharmonic, the Mariinsky Theatre, the Krasnoyarsk Opera and Ballet Theatre, the Novosibirsk, Irkutsk, Khabarovsk and Hamburg Philharmonic Orchestras, the Tchaikovsky Symphony Orchestra, the State Hermitage Orchestra and the National Symphony Orchestra of Syria as well as performers from Spain and China.
In November 2012 as part of celebrations marking three hundred and eighty years since the inclusion of Yakutia into the Russian State, the Symphony Orchestra of the Yakutia Philharmonic performed at Gostiny Dvor in Moscow and at the Concert Hall of the Mariinsky Theatre in St Petersburg. Symphonica ARTica is a regular participant at the annual international music festival The Northern Lights, which is dedicated to World Music Day. In 2012 at this festival, together with the State Hermitage Orchestra the ensemble took part in a world premiere of a production of Bortnyansky’s opera Creonte. In 2013 came a festival concert of the Symphony Orchestra of the Yakutia Philharmonic under Fabio Mastrangelo featuring Vladimir Mandrin. As part of the 2014 festival the orchestra performed two concerts – Vivat, the Arctic! with Aitalina Adamova, philharmonic soloists Andrei Dedyukin, Ulyana Golikova and Dmitry Rogov and the concert Enchanting Opera featuring Vladimir Magomadov, Daria Terekhova, Yulia Mennibaeva and Pavel Chervinsky.
In 2014 the musicians of the Symphonica ARTica and the Mariinsky Orchestra under Valery Gergiev performed at concerts of the XIII Moscow Easter Festival in Yakutsk. Also featured in the concerts were Denis Matsuev, Ivan Pochekin and the United Children’s Chorus of Yakutia.
In 2015 as part of the XIV Moscow Easter Festival the Symphonica ARTica orchestra gave a concert in Yakutsk with soloists of the Mariinsky Academy of Young Opera Singers and the United Chorus of Yakutsk. The same year, on State Day of the Republic of Sakha (Yakutia), Ekaterina Mechetina and the Symphonica ARTica orchestra performed under Natalia Bazaleva at a concert featuring the presentation of a Steinway & Sons piano.
The symphony orchestra works with such conductors as Alexis Soriano, Leo Kremer, Yevgeny Khilkevich, Vladimir Kudrya, Vladimir Shulyakovsky, Alexei Kudrya and Sergei Sviridov and the composers Vladislav Kazenin, Yaroslav Sudzilovsky, Pavel Karmanov, Yevgeny Petrov, Franz Cibulka, Zakhar Stepanov, Kirill Gerasimov, Vladimir Ksenofontov, Nikolai Mikheyev and Yegor Neustroev.
Alexander Trostyansky, Vasily Shcherbakov, Hugo Ticciati, Johan Bridger, Larisa Yudina, Khachatur Badalyan, Anna Kiknadze, Alexander Mitenyov, Anna Makarova, Olesya Tertychnaya, Antonia Cifrone, Boris Andrianov, Dmitry Illarionov, Vladimir Mandrin, Alexander Knyazev and Ivan Pochekin are among performers who have appeared with the orchestra.