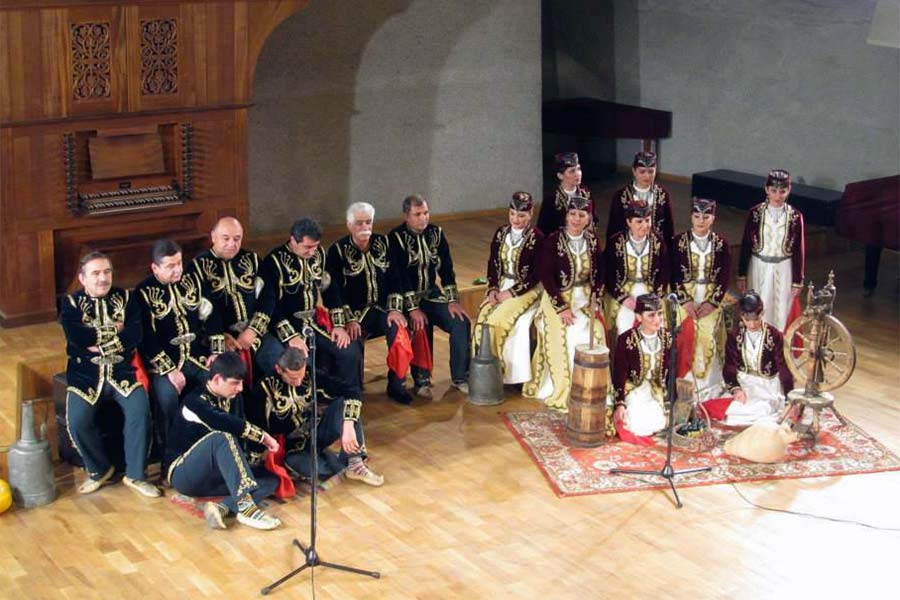 PROGRAMME:
Songs, dances and instrumental folk music from various regions of Armenia from ancient times to the present day

The ensemble was founded in 1976 by the famous ethnographer and folklorist Maro Muradyan (1933–1987). In the early 1980s the ensemble received the status of Ethnographic Ensemble of the National Commission on Television and Radio of Armenia. Akunk has participated in such musical films as The Sources of the Song, The World of Taron and The Return of the Song. The Return of the Song received an award at the All-Union Musical Film Festival. Since 1979 the ensemble has performed regularly in Russia, other post-Soviet states and abroad. The repertoire includes wedding, lyric, church and patriotic songs as well as instrumental compositions performed with national musical instruments – the duduk, shvik, sring, blul, zurna, dam, dhol and pku – representing different periods of Armenian cultural history. Akunk also performs ethnographic dances descending from the old family traditions of the Erzurum, Sason, Muş, Van, Lori and Artsakh regions. In 2007 Akunk was declared “Best Ensemble of the Year”.