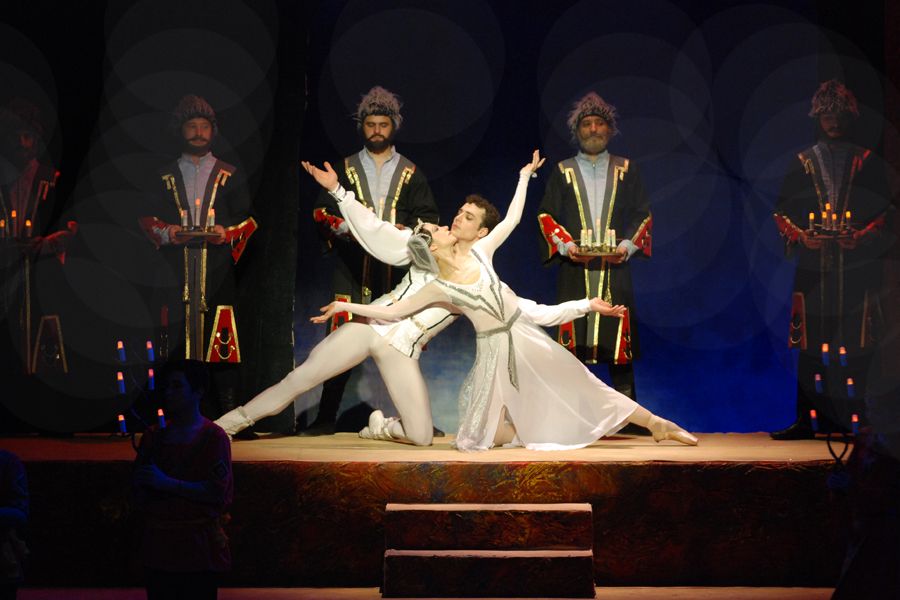 Performance running time: 2 hours 20 minutes
There will be two intervals

SYNOPSIS:
Act I
In an Armenian village people are resting after a hard day’s work. Compared with the other girls, Gayaneh stands out with her beauty and charm. In her spare time she loves to dance. Gayaneh is the embodiment of Armenia, its vivid colours and unique national hues. Armen, who is in love with Gayaneh, cannot draw his eyes away from the young woman.

Act II
Giko, who is aware of Gayaneh and Armen’s love, nevertheless tries to win the girl’s heart. His unrequited love encourages him to play dirty and cruel tricks. Giko is a courageous and decisive fellow who will see no obstacles in his path. But here he faces defeat. This annoys Giko. His heart is filled with malice and despair. He resolves to avenge himself.

Act III
With the help of his friends, Giko abducts Gayaneh. The entire village hears of what has happened with lightning speed. The villagers are shocked and angry. Led by Armen, they discover the kidnappers. Giko is unable to bear the villagers’ wroth. He resolves to flee. Gayaneh and Armen are happy. Love has triumphed and they are free to marry. All their fellow villagers sing and dance at the wedding. This part of the ballet includes several folk dances, among them the famous Sabre Dance.

The opera house was founded in 1932 and opened in January 1933. In 1938 the theatre was named after the outstanding Armenian musician and teacher Alexander Spendiarian, while in 1956 it was awarded the honorary epithet of “Academic”.
The very greatest figures in Armenian culture were involved in the establishment of the theatre, among them the singers Aikanush Danielian, Shara Talian, Leon Isetsky-Ioanisian and Alexander Karatov, the conductors Konstantin Sarajev, Georgy Budagian, Suren Charekian, Vladimir Piradov, Sergei Shatirian and Mikael Tavrizian, the designers Martiros Sarian and Ara Arutyunian, the stage directors Arshak Burjalian, Armen Gulakian, Levan Kalantar and Vardan Ajemian and the ballet master Ilya Arbatov.
The gala opening of the theatre saw a performance of Alexander Spendiarian’s opera Almast, the libretto of which was based on the poem The Capture of Tmkabert by Hovhannes Tumanian, itself based on folk tales and legends. The opera was given a rapturous reception by audiences and critics alike, and ever since then the theatre has opened each new season with this opera in line with tradition. The first ballet production was Pyotr Tchaikovsky’s Swan Lake in 1935.
Thanks to the opening of the new theatre, Armenia began to witness the emergence of operas and ballets based on folk themes. In 1939 Aram Khachaturian composed music for Happiness, the first Armenian ballet. The ballet was subsequently renamed Gayaneh, and this new music version was created in 1942 to a libretto by Konstantin Derzhavin with choreography by Nina Anisimova, though in 1957 the score was drastically revised. Khachaturian later composed three suites for concert performance based on music from the stage version of the ballet. Arguably, the most famous musical highlight is the Sabre Dance from the last act of the ballet. To this day, Gayaneh is a vivid example of the combination of folk and classical dance and it has become a symbol of Armenia. The production created by people’s artist of Armenia Vilen Galstyan occupies a special position in the repertoire of Armenia’s national opera house – its dancers have performed it in countries all over the world, and wherever it is performed it is an unfailing “hit” with audiences.
Over the years, the theatre has formed a rich and varied repertoire, staging the finest operas and ballets from international and Armenian music reserves. These include the operas Davit-Bek and Anush by Armen Tigranyan, Arshak II and Karine by Tigran Chukhajian, The Queen of Spades by Pyotr Tchaikovsky, I pagliacci by Ruggero Leoncavallo, Otello and La traviata by Giuseppe Verdi, Poliuto by Gaetano Donizetti, Carmen by Georges Bizet and Aleko by Sergei Rachmaninoff and the ballets Sevan by Grigory Yegiazarian, Gayaneh and Spartacus by Aram Khachaturian, Romeo and Juliet by Sergei Prokofiev, Don Quixote by Ludwig Minkus, Vardanank by Edgar Oganesian, the Gotan Project’s Tango, Sayat-Nova by Alexander Arutiunian, Spring to music by Antonio Vivaldi and Boléro to music by Maurice Ravel to name but a few.
Over the years the theatre has been directed by acclaimed figures of the arts world – such as singer and stage director Tigran Levonyan and singer Gegam Grigorian – while the theatre’s current Principal Conductor and Music Director is Karen Durgaryan, Honoured Artist of the Republic of Armenia.