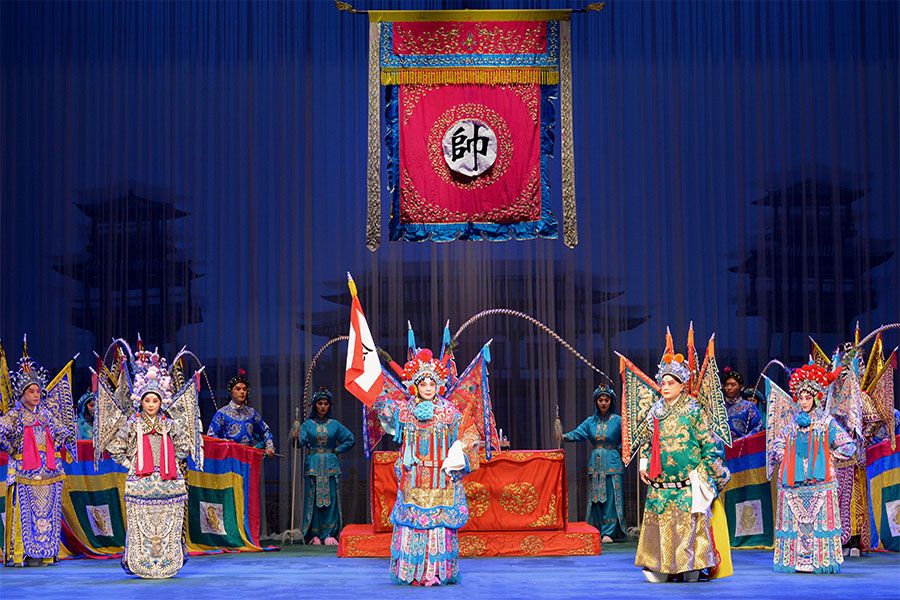 Lady Mu Guiying Takes Command was adapted by Mei Lanfang in 1959 and he himself played the lead role in celebration of the 10th anniversary of the founding of the People’s Republic of China. This play has become one of the classics of the Mei School and was the last work designed and choreographed by Mei Lanfang himself.
The story portrays the great patriotism of an elderly lady. Mu Guiying is the widow of a family of generals from the Song Dynasty. When the country is invaded by an enemy force, the minister Kou Zhun persuades the Emperor to hold a martial arts competition to select a supreme commander. Lady Mu’s teenage children win the competition, but the Emperor calls on Lady Mu to come out of retirement and take command instead. Despite her old age, she leads the army in battling the invaders.
Brave, resolute and loyal, Mu is considered a true national heroine. Mei Lanfang’s crowning artistic achievement explores subjects such as personal ethics versus familial and national duty as well as the power of youthful exuberance versus the wisdom of age. This stunning theatrical spectacle showcases colourful scenes of acting, combat, dance, music and song.

Mei Lanfang was the grand master of Peking opera in China. On 22 October 2014 the 120th anniversary of Mei Lanfang’s birth will be celebrated (in China the sixty-year calendar cycle, based on the combinations of a cycle of ten heavenly stems and twelve earthly branches, makes the 60th birthday a very important event, and the 120th anniversary is no less significant).
To commemorate the 120th anniversary of the birth of this famous Peking opera performer and to promote the art of Peking opera itself, Mr Li Enjie, President of the Jingju Theatre Company of Beijing, has initiated the 120th Anniversary of Mei Lanfang touring project. Under the leadership of Mei Baojiu, son of Mei Lanfang, a world tour of Peking opera with a cast of outstanding performers will follow in the footsteps of Lanfang, appearing in Russia and America.
Mei Lanfang (1894-1961) was the most famous performer of Peking opera in China. His outstanding artistic achievements and his contribution as a cultural ambassador of China and Chinese art resulted in his becoming a true legend. He was born into a family of Peking opera and Kun opera performers and became the best-known among the Four Famous Dan Performers – men performing female roles. Because of the improvements and innovations that he brought to his art, the system that became known as the Mei School describes his unique oriental opera performance system which, together with the Russian Stanislavsky System and the German Brecht System make up the “Three Performing Systems of the World”.
Mei Lanfang took Peking opera abroad several times in order to promote understanding of Chinese culture and art among people all over the world and to introduce Chinese theatrical arts to the world of international opera. Prior to 1949 he gave performances in Japan, the USA and the USSR where his performances won him great acclaim. The University of Southern California and Pomona College both conferred upon him honorary doctorates of literature. Japanese scholars compiled all the newspaper reviews of his performances into a volume titled Pin Mei Ji (The Mei Review Record). His production of Hongni guan was adapted into a silent movie by a Japanese film company. Later, the famous Russian director Sergei Eisenstein gave the film new life by adding sound effects. The American media was lavish in its praise, stating that “Mei Lanfang’s art unquestionably surpasses all obstacles existing between East and West.”
Mei devoted himself to Chinese opera throughout his entire life. His contributions to the development and revitalisation of Peking opera remain unsurpassed and worthy of deep admiration.
Mei Lanfang was famous for performing female roles and taking Peking opera abroad. Following extensive tours to Japan and the USA which received overwhelming audience responses he was invited to visit the Soviet Union in 1935.
Some of the most important theatre and film critics of the former half of the 20th century – such as Vsevolod Meyerhold, Alexander Tairov, Sergei Tretyakov, Edward Gordon Craig, Konstantin Stanislavsky, Sergei Eisenstein and Bertolt Brecht – saw Mei Lanfang perform his art in Moscow and St Petersburg. After two weeks of performances in both cities, he was asked to give a further performance which was eventually held at the Bolshoi Theatre on 13 April 1935. The star-studded audience included many prominent artists, among them Maxim Gorki. The performance was said to have lasted until three o’clock in the morning and the applauding crowd demanded eighteen curtain calls.
Mei Lanfang himself described the purpose of the visit: “On the one hand, I want to take Chinese traditional opera abroad; on the other hand, I would also like to take this opportunity to study and assimilate foreign theatre arts so as to enrich our own national arts.” Mei Lanfang took the chance to see a great number of theatre and opera performances as well as film screenings. The journey of the Peking opera performer may be characterised as a mutual cultural exchange of developments in the arts in eastern and western cultural circles.
One day after his final performance in Moscow, Mei Lanfang invited prominent theatre and film people to a final discussion; among others, Vladimir Nemirovich-Danchenko, Sergei Tretyakov, Vsevolod Meyerhold, Alexander Tairov and Sergei Eisenstein discussed their impressions of the Chinese dramatic arts and the use and the applicability of these techniques in western theatre with Mei Lanfang. Bertolt Brecht was present that night and it was there that he first came across the expression “alienation effect”, subsequently to play a key role in his theory of epic theatre.
Even today, the cultural encounters during Mei Lanfang’s visit to the Soviet Union may be considered a milestone in the history of theatre art; they have certainly enriched future concepts and practices.

The history of Peking opera
Peking opera has a history of only about two hundred years. There are other Chinese opera genres that came into existence much earlier, such as Kun opera which emerged as far back as the 14th century. It is said that Peking opera was born in 1790, when four opera companies from the province of Anhui came to Beijing to perform on the occasion of the 80th birthday of the Emperor. Soon afterwards, some other theatre companies from the region of Hubei followed. Over the years, Peking opera was formed through the combination of various music and performing techniques. In essence, Peking opera has never been an exclusive art form; from its very beginnings it was enjoyed by both the imperial court and the common people, so a wide range of audiences from all social classes was generated. Initially, exclusively male performers were allowed to participate in a performance. It was only from the 1870s onwards that women were permitted to appear on the stage. Despite that, however, male performers continued to be highly popular in dan roles.

From the capital to the rest of China
From 1860 onwards, numerous travelling companies spread Peking opera all over China. By the end of the 19th century, Peking opera had become the most acclaimed form of opera in China. Beijing was the centre of the theatre world. The Qianmen area in the south of the Forbidden City had developed into a flourishing commercial centre packed with theatres, tea houses and restaurants which hosted all kinds of artistic activities and where Peking opera became a part of daily culture. It became the home of a multitude of famous Peking opera artists. New structures were introduced for managing theatres and Peking opera companies. From teahouses to theatres
Peking opera was originally performed in a xiyuanzi, meaning a “tea courtyard”. Back then, people sat on benches facing one another and customers paid only for the tea, not for the performances. Peking opera was just some kind of “side show”; performances sometimes lasted as much as twelve hours. This changed with the introduction of so-called “old style theatres” in which all benches were installed facing the stage. Until 1931, the audience was separated; the men sat in the stalls and the women in the balconies. During the period of the Republic of China (1911-1949) theatres transformed and became comparable to western stages.

Peking opera in the world
One of the most outstanding figures of Peking opera, Mei Lanfang was the first Peking opera actor to perform with his company outside China. His interpretation of dan roles is legendary, and a whole new performing school developed from his style. From the 1920s onwards Mei Lanfang visited countries including Japan and the USA, where he achieved extraordinary success. Since then, Peking opera has been shown throughout the world and has been at the forefront of cultural exchange. In 2010 Peking opera was included on UNESCO’s Intangible Cultural Heritage list.

The performance of classical plays
Some of the classical plays written during the Qing period could hardly be performed today. Many of them consist of more than twenty-four acts; to rehearse them would take years and to stage them would take several days. The epic play Shengpingbaofa (The Precious Raft of Exalted Peace) – commissioned by the Peking opera-fan Emperor Qianlong – tells the story of a monk and his three companions travelling to the West in search of Buddhist scriptures. The play was adapted from the tale Journey to the West, one of the four great classical Chinese novels, and consists of no less than two hundred and forty acts!
Today, audiences generally watch Peking opera in concentrated form, the zhezi xi which is a one-act performance of a play that originally featured multiple acts. It is the highlight of a drama that people never get tired of watching. As a basic rule, a successful full-length opera contains one or two acts that can be staged separately as a zhezi xi.
Peking opera plays can be categorised as either “civil plays” (wenxi) or “martial plays” (wuxi). Civil plays focus on the relationships between the characters, and tell stories of love and intrigue. In these types of plays it is principally dan and older roles that appear on the stage. One famous excerpt from a civil play is, for example, Farewell My Concubine which portrays the last moments of a conqueror and his favourite concubine. Martial plays generally focus on action, acrobatics and martial arts; young sheng, jing and chou used to be the main characters. At the Crossroads, a highly entertaining piece which features blind combat, is a fine example of a martial play.