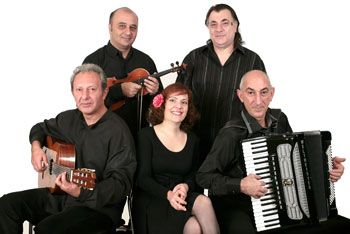 In the rhythm of dance: from Piazzolla to Babajanian

Sayat-Nova
To the Beloved

The Cadence Ensemble was formed in February 2004 by five outstanding Armenian instrumentalists, initially to perform the works of Argentinean composer Astor Piazzolla (1921-1992).
The ensemble’s debut concert took place in April 2004, followed by several other appearances that attracted the attention of fans and promoters. The Cadence Ensemble at once became one of the leading and most popular music groups in Armenia. Soon the ensemble expanded its repertoire to include masterpieces of classical and contemporary European, American, Russian and Armenian composers while also maintaining its affinity with Piazzolla. Arrangements of many famous works including classical, world music and pop are now included in the ensemble’s repertoire. Also featured are pieces composed for and dedicated to the ensemble and its members.
Cadence has enjoyed international exposure through live broadcasts of its concerts and the production of several CDs and DVDs. As a result, the Cadence Ensemble has been invited to perform in Russia as well as throughout Europe, Asia, the Gulf States and the Middle East. The first international tour undertaken by the ensemble took place in April 2005 with Cadence performing at the Teatro Colón and the Teatro Nacional Cervantes in Buenos Aires (Argentina).
In July 2005 the ensemble and its soloists gave concerts and master-classes as part of the Pažaislis Festival in Kaunas and Vilnius (Lithuania).
In December 2005 the ensemble participated in international music festivals in Tehran (Iran) and Tbilisi (Georgia). In May 2006 Cadence gave concerts in Abu Dhabi, Sharjah and Dubai (UAE), followed by appearances in September the same year at the Cairo and Alexandria Opera Houses (Egypt). In 2007 the ensemble gave concerts in Beirut and Byblos (Lebanon), Paris (France), London (UK), Brussels (Belgium) and Shenyang and Beijing (China). In 2008 the ensemble performed concerts in Montreal (Canada), Nicosia (Cyprus) and Beirut (Lebanon).
In October 2007 the ensemble recorded two CDs at the Abbey Road Studios of EMI in London. The recording was produced by the Richmond Studios (UK). Both CDs released by Signum Classics (UK) in 2008 have had wide international distribution.
The CD Expressia: Armenian Metamorphoses received the Luxemburg Pizzicato music magazine’s prestigious Supersonic Award in November 2008.
In May and June 2009 the ensemble gave two performances at the Pasadena Civic Auditorium (Los Angeles, USA) and London (UK). In October 2009 it gave a concert at the Parnassus Hall in Athens and took part in the Dimitria Festival, Thessaloniki (Greece).
In October 2010, efforts of the Cadence Music Centre and Ministry of Culture of Armenia resulted in the Yerevan International Tango Festival, launched with a concert by the Cadence Ensemble and the outstanding French composer and accordionist Richard Galliano.
In 2010 Cadence gave a concert in Riyadh (Saudi Arabia) and closed the Armenia: Up-Close year of culture in Slovenia with a concert at the Ljubljana Philharmonic Hall.
In April 2011 as part of the Yerevan International Tango Festival the ensemble appeared with world-famous Argentinean-Swiss bandoneónist and composer Marcelo Nisinman.
In 2011 the ensemble participated in the Days of Armenian Culture in Ukraine festival with two performances at the Kiev and Odessa Opera Houses. In March 2012 the Cadence Ensemble gave a gala-concert at the Strovolos Theatre in Nicosia (Cyprus).
In April 2013 during the Yerevan International Tango Festival the Cadence Ensemble gave two concerts in Gyumri and Yerevan with prominent Argentinean bandoneónist and composer Walter Ríos and singer Mariel Dupetit.
Since September 2012 the ensemble has seen changes in its makeup – violinist Varazdat Khachumyan, one of the ensemble’s original founding members, returned, bringing with him pianist Sophie Mikaelyan and double bass player Gurgen Amiryan.