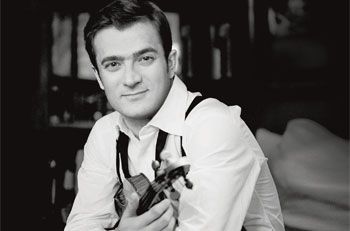 Russian conductor Tugan Sokhiev was appointed Musical Director of the Orchestre National du Capitole de Toulouse on 1 September 2008 after three years as Principal Guest Conductor and Musical Advisor of Toulouse’s musical ensemble. His position as Musical Director of the Orchestre National du Capitole will continue until August 2016. The orchestra launched a recruiting process at his instigation in 2009 and now boasts one hundred and twenty-five musicians.
Michel Plasson conducted the Orchestre National du Capitole from 1968 to 2003 and is now its Honorary Conductor. Under his management, the orchestra’s symphonic calling developed considerably, undertaking a great number of tours abroad and recording over sixty records with EMI Classics.
The orchestra presents its symphony season at the Halle aux Grains in Toulouse, gives concerts in the Midi-Pyrénées region and performs throughout the opera and dance season of the Théâtre du Capitole. It has been invited to a number of festivals including the international George Enesco Festival in Bucharest, the Quincena Musical Festival in San Sebastian and the Chorégies d’Orange (Verdi’s Aida and two concerts in July 2011). For several seasons now, it has been billed at the Salle Pleyel in Paris where it gave three concerts in the 2012-2013 season. In January 2011, it performed Prokofiev’s Betrothal in a Monastery at the Opéra Comique, co-produced by the Théâtre du Capitole. Following the United Kingdom, Germany and South America; in 2012-2013 the orchestra undertook a tour of Japan and China, and gave a series of concerts at the Musikverein in Vienna. The Orchestre National du Capitole de Toulouse has a strong international reputation as a result of its tours abroad and the establishment of audiovisual projects in partnership with numerous media organisations, among them Radio Classique, France Musique, Medici.tv and Mezzo.tv.
The discography of Tugan Sokhiev and the Orchestre National du Capitole de Toulouse includes numerous recordings for Naïve Classique which have enjoyed considerable success, among them Tchaikovsky’s Fourth Symphony, Musorgsky’s Pictures at an Exhibition, Rachmaninoff’s Symphonic Dances and Prokofiev’s Peter and the Wolf. Shostakovich’s Festive Overture and Tchaikovsky’s Fifth Symphony met with great critical acclaim and were singled out for a Gramophone Choice award in the recording category.
Their most recent releases in 2013, once again for Naïve Classique, include Stravinsky’s Le Sacre du printemps and The Firebird.
Karol Beffa, Resident Composer from September 2006 to June 2009, composed three scores performed under the baton of Tugan Sokhiev. Since the 2010 season, the Orchestre National du Capitole de Toulouse has been collaborating with composer Bruno Mantovani.
In September 2012, Christophe Mangou was named Associate Conductor of the Orchestre National du Capitole de Toulouse and is in charge of the education programme.

Anatoly Konstantinovich Lyadov called his The Enchanted Lake “a fairytale scene,” thus sharply defining the border between this work and the romantic symphony poem. Having already completed the score, Lyadov expounded in the most animated manner how he saw this northern woodland lake: “It is so picturesque and pure, with stars, and so mysterious in its depths. Most importantly there is no-one there, no requests and no complaints – just dead nature, cold, evil, but as fantastical as in a fairytale.” Generally there are never any people in Lyadov’s music and The Enchanted Lake is no exception. When writing the “fairytale scene” the composer used sketches for the mermaid scenes from his aborted opera Zoryushka (Dawn) after the play Night at the Crossroads by Dal in which he brings to life an entire world of Russian folk mythology. The makeup of the orchestra is surprisingly modest and there is not one single superfluous detail. The quivering strings bring to mind the woodland pages of Kitezh. Just a few notes of the celesta depict the stars which become illuminated with the advance of night. The flickering dual notes of the flutes evoke their reflections on the surface of the water. The French horn issues mermaid-like calls... The Enchanted Lake is dedicated to Tcherepnin, under whose baton it was first performed early in 1909.
Anna Bulycheva

The name of Max Bruch (1838–1920) may not resonate as loudly as those of Mendelssohn or Brahms in the world of music, but his Violin Concerto No 1 in G Minor, Op. 26, occupies a respected position in the library of great romantic masterpieces.
Max Bruch was born in the same year that Mendelssohn drafted the first sketches of his Violin Concerto in E Minor. The premiere of Bruch’s concerto took place ten years after Schumann’s death. One decade later came the acclaimed Violin Concerto by Brahms. And yet there is another great musician whose art united all of these aforementioned violin concerti in a tradition that lasted an entire century. His name was Joseph Joachim. The title page of Bruch’s Violin Concerto bears the dedication “To Joseph Joachim as a sign of friendship.” The sketches of the Concerto in G Minor possibly date to 1857 when the nineteen-year-old Bruch graduated from the Konservatorium in Cologne, where his teachers had included Ferdinand Hiller and Carl Reinecke. At the age of twenty Bruch was already teaching subjects on music theory at the Konservatorium. Premieres of his operas, oratorios, symphonies, instrumental concerti, chamber ensembles and vocal cycles all followed one after another... Bruch’s choruses were particularly popular in Germany. He conducted operas and concerts of symphony music throughout Germany and abroad. Max Bruch’s pupils included representatives of various national composition schools such as the outstanding 20th century Italian Ottorino Respighi and Briton Ralph Vaughan Williams.
Interest in music’s national sources and exotic cultures was an inherent feature of romanticism. Bruch’s most popular works include Schottische Fantasie for violin and orchestra, Adagio on Celtic Themes, the Jewish melody Kol nidrei for cello and orchestra and adaptations of Russian and Swedish songs and dances... Contemporaries gave lofty appraisals of Bruch’s gift as a fervent romantic, a first-class and vivid melodist, a master of refined musical form, an erudite man and a dazzling professional. In the same year as Tchaikovsky, Saint-Saëns, Grieg and Boito (1893) he was awarded the title of Honorary Doctor of Music by the University of Cambridge. In the summer of 1864 Bruch, while mulling over a concerto, returned to some earlier sketches. The premiere of the first version of the Concerto in G Minor was conducted by the composer on 24 April 1866 in Koblenz. The composer, however, continued to hone his opus. In the summer of 1866 he sent a revised version of the concerto to Joseph Joachim, who first performed the final version on 7 January 1868 in Bremen. It was soon being performed in other cities. It featured in the repertoires of Ferdinand David and Leopold Auer and subsequently of other great violinists throughout the world.
The structure of the concerto is unusual: all of the movements are restrained, in sonata form. From the deep low rumble of the kettledrums the introduction develops – a violin recitative supported by the orchestra, reminiscent of some bard’s epic tale. The rhythmically resilient and passionate “flight” of the violin solo and the broad, expressively intense and lyrical melody – both themes of the Allegro moderato are subjected to development in the dialogue between the soloist and the orchestra, in the passages at times lyrical and elegiac and, at others, stormy and dramatically virtuoso. The brief solo cadenza of the violin (using the same material as the introduction) “imperceptibly” and uninterruptedly flows into the second movement – the divine Adagio, a true musical pearl that impresses with the rare beauty of its melodic images. The tensely pulsating rhythm of the introductory bars of the Allegro energico foretells the sweeping and noble principal theme of the finale. In its distinctly Hungarian character one can observe a unique “compliment” to Joseph Joachim (years later, Brahms would do a similar thing in the finale of his Violin Concerto). In the image of the second, broadly pathétique theme, hymn-like features are predominant. The concerto concludes with an energetic and dazzling coda.
Iosif Raiskin

The Variations on an Original Theme for Orchestra (Enigma variations) were completed by Edward Elgar in 1899 and came to be known as his “calling card”. Tradition has it that once, after an entire day teaching, Elgar improvised a theme in which one can hear a familiar weariness that reminds Russian audiences of the Song of the Volga Boatmen. The composer’s wife Caroline Alice Elgar liked the theme, and he subsequently composed the variations. The initials or invented names are disguises of real people very close to the composer. The romantic and refined first variation, a direct continuation of the theme, is dedicated to his wife. In Variation No 6 the theme is given over to the violas (Isabel Fitton studied the viola under Elgar). Once, the “hero” of Variation No 7 – the architect Arthur Troyte Griffith – and the composer were caught in a thunderstorm and took shelter at the home of Winifred Norbury (see Variation No 8). Variation No 9, Nimrod (August J. Jaeger), stands alone, the amazing beauty and orchestral expressiveness of its Adagio forming Elgar’s masterpiece. The name of the Biblical King Nimrod who built the Tower of Babel is a “pseudonym” for the composer’s friend who worked at the London music publisher Novello & Co.
The other pieces are, to some extent, sweet nothings. Dorabella is the stammering Dora Penny, while Variation No 11 is a portrait not of George Robertson Sinclair, an organist in Hereford, but rather of his beloved bulldog. In the thirteenth bar of Variation No 13, against a background of measured figures from the violas and tremolo kettledrum that depict the fluctuation of the waves and the noise of machinery in a ship’s hold, the clarinet performs the secondary theme from the overture of Mendelssohn’s Calm Sea and Prosperous Voyage, which is then taken up by the trumpets and trombones: the heroine of this variation was setting sail for Australia. The finale, in which the orchestra may be joined by the organ, depicts Edward Elgar himself. He disclosed all the enigmas of the work himself through his comments on the work. Though at the same time, he left the audience with another enigma: in the massive score there is, ostensibly, some other implicitly resonant theme hidden in the variations... This is being sought even today, and these searches force us to return to Enigma, hunting for a deeper meaning in the leaves of this private “album”.
Anna Bulycheva