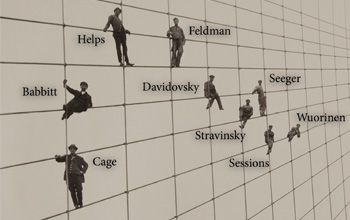 The programme includes:
Ruth Crawford Seeger
Preludes No 1 and No 9, Study in Mixed Accents

Mario Davidovsky
Synchronism No 9 for violin and tape

Russian audiences have their first opportunity to hear a rare programme of American mid-century modern music, performed by five outstanding New York musicians, curated and led by the legendary five-time Grammy-nominated pianist Alan Feinberg and cellist Fred Sherry, a veteran artist of the Chamber Music Society of the Lincoln Center. The eclectic programme selected to sample this innovative period will include works by Feldman, Babbitt, Crawford Seeger, Wuorinen, Sessions and Stravinsky.
In the decades after WWII, the New York music scene witnessed a veritable explosion of new composition ideas, activities and personalities.
Performers and audiences eagerly faced new technical and aesthetic challenges, and there was an engaged and enthusiastic reception for “new music,” allowing it to burgeon despite the sceptical or downright negative reaction from some members of the music world. This programme represents some of the luminaries of that period. They all knew and interacted with each other – sometimes as close friends, sometimes as barely tolerant colleagues.
Many of their works were composed especially for those performing at this concert by Alan Feinberg and Fred Sherry.
The only exception to this list is Ruth Crawford Seeger who belonged to the previous generation of musicians and not strictly part of the New York scene. A talented and innovative composer, at one stage of her life she abandoned composition for many, many years.
The programme offers a wide range of musical styles and composition ideas. The short Stravinsky piece is included to reflect the enormous influence his counterpoint and twelve-tone writing had on some of these composers.

What is specific about American music?
American music is as varied as the makeup of the USA. Much American music has a deep rhythmic vitality and spiky New World harmonies. The instrumentalists are asked to play at the edge of their technical ability. We find that exciting.

How does it relate to the rest of the world and to Russia in particular?
There were over a dozen different musical traditions in the early colonial days. Some of these traditions were European, some were native to the New World, some were extensions of religious music from various parts of Europe and some were connected to the African slave trade. The influences of Russia and Asia came later on in the history of America. Music is an international language which cannot be translated and which is understood differently in every country. However, all music lovers appreciate a good tune and a rousing rhythmic development. So much of the essence of the best American music is its rhythm, and that is often felt by foreigners to be antithetical to deep musical expression. That is why so often we Americans are looked at as circus musicians: a cacophony of different styles, and at best vibrancy and energy unknown to the Europeans.

What expectations do you have of St Petersburg?
We are really looking forward to visiting a place which is so important historically, one of the world’s most beautiful cities and a city that hosts a large and vibrant variety of cultural activities and art collections.

What can audiences expect from this concert?
This concert will present an opportunity to hear music from a particularly fertile epicentre of the American music scene: some of America’s most original, challenging and “serious” music. It will be performed by some who were actively part of the “scene,” and the programme will offer works rarely heard outside the USA by composers who continue to remain influential and important figures in the history of American music. People should come to this concert because they may never be able to hear one like it again.

What, if any, is your favourite football team?
The New York Giants.